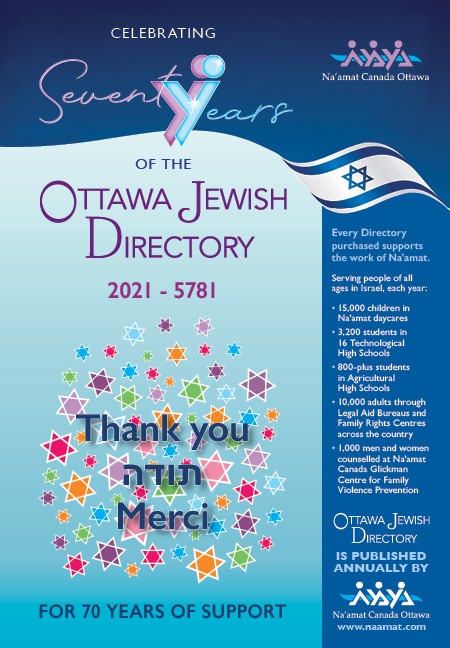 This year’s Ottawa Jewish Directory (OJD) is dedicated to you, our supporters! As the OJD marks an incredible 70 years in our community, we reflect back on its long and successful history in our Ottawa Jewish community.

The story goes that in 1950, Rose Baylin had been visiting friends in New York and brought home a New York Jewish Telephone Directory. She presented the idea as a way to raise funds to her Pioneer Women (as Na’amat was known back then) and Labour Zionist Council colleagues. Among them were Harry and Sylvia Shinder and Sonia Viner, all of them active Jewish community volunteers, and the rest is history. What was conceived of as a way to raise needed money for the fledgling State of Israel, blossomed into an annual project that became a staple in the Jewish community, and can still be found in many Jewish homes today.

With its first printing in 1951, Ottawa was the first Canadian city to produce a “Jewish Reference and Telephone Directory.” In the beginning, a subscription cost a minimum donation of $1.00. To compile the first edition Sonia Viner and her team of dedicated committee members began the laborious task of collecting phone numbers of individuals with Jewish-sounding names by manually flipping through Ottawa’s Bell Telephone Book. Once the names, addresses, and telephone numbers had been recorded, they set to work alphabetizing, formatting, and setting up the Directory's layout. Meanwhile, Harry Shinder and his team of committee members set out marketing and selling advertisement space to businesses and professionals, as well as sourcing a suitable printing company.

Each year since, dedicated volunteers continue to roll-up their sleeves to update contact information, sell the ads that bring in the main source of revenue for the project, and see to all the details including the delivery of the books to friends and neighbours. In this sense, the Directory has not changed in its seventy years, and dedicated volunteers still work tirelessly to publish the Directory.

The OJD has seen significant changes over the years. It now includes many more cellphone numbers, as landlines become less prevalent. There are approximately 2,000 listings and 1,000 copies sold each year. Since the Directory was not published in 2020 due to the pandemic, Na’amat members and volunteers undertook the arduous task of contacting those listed in the 2019 OJD to verify contact information. They were successful in reaching over 80% of those listed, updating addresses and adding yet more cellphone numbers and email addresses than in previous years.

Proceeds from the OJD still support a myriad of social services in Israel. Through Na’amat Israel, the largest women’s movement in Israel, the proceeds of the OJD help sustain daycare centres, technological and agricultural high schools, the world-famous Glickman Centre for the Treatment and Prevention of Domestic Violence, scholarships for exceptional female graduate students, legal aid and more. The Glickman Centre holds a special place in the hearts of the members of Na’amat Canada, as it was founded through the support of Na’amat Canada and the Tel Aviv Municipality Foundation. Since its inception, it has helped thousands of victims of domestic abuse.