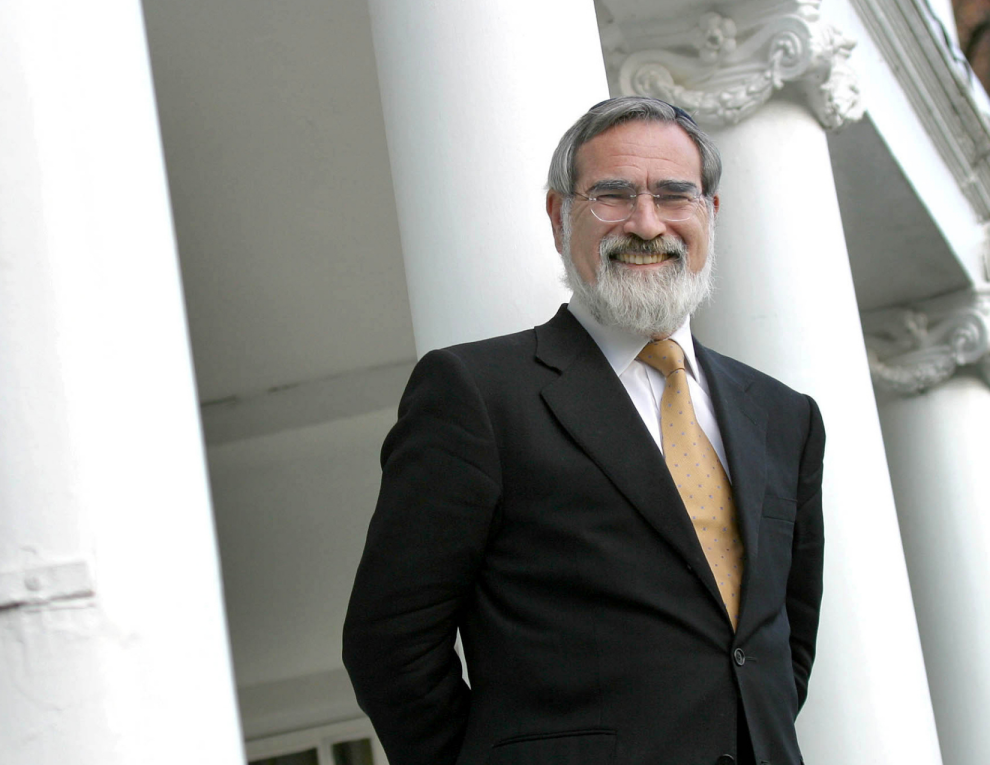 A few weeks ago, on November 7, the world lost a gadol, a giant in the Jewish world and beyond, Rabbi Lord Jonathan Sacks Z”L at 72 years of age. The British Orthodox rabbi, philosopher, theologian, author, and politician served as the chief rabbi of the United Hebrew Congregations of the Commonwealth from 1991 to 2013 and was appointed as a crossbench peer to the U.K. House of Lords in 2009. He held multiple professorships and wrote more than 30 books. Through his work, he bridged Jewish communities around the world and emphasized the ongoing relevance of Jewish teachings and values.

I knew Rabbi Sacks through his writings, which I sought out throughout my rabbinic training. Indeed, almost every sermon and d’var Torah that I have ever written has contained a citation from him. I loved the clarity and meaning of his writing and looked forward every week to receiving his d’var Torah on the weekly portion. I especially appreciated how Rabbi Sacks articulated central tenets in Judaism regarding diversity and inclusion.

Rabbi Sacks posited that a positive respect for diversity, and a commitment to keep working at the divine unity underlying diversity, is the central contribution of Judaism to religion. In Radical Then, Radical Now, Rabbi Sacks presciently argued that the great challenge and strength of Jewish theology is how it views diversity being a necessary component to creation, and reaching out to the “other” as being a central element of Judaism:

Judaism is also religious revolution. Alone among the great religions, it argues that there is one God and many faiths – and only one world in which to live together in peace. That means that for Judaism the great spiritual challenge is not so much finding God within oneself as finding God within the other, the stranger. In an age of ethnic wars and religious conflict, that remains a monumental and still-urgent challenge.

For Rabbi Sacks, the greatest principle found in the Hebrew Bible is not “You shall love your neighbour as yourself” (Leviticus 19:17), but rather “You shall not oppress a stranger, for you know the heart of the stranger – you yourselves were strangers in the Land of Egypt” (Exodus 23:9). Or “When a stranger lives with you in your land, do not ill-treat him. The stranger who lives with you shall be treated like the native-born. Love him as yourself, for you were strangers in the Land of Egypt. I am the Lord your God” (Leviticus 19:33-34). Rabbi Sacks explained his choice for the greatest principle in the Hebrew Bible as “it is easy to love our neighbour. It is difficult to love the stranger. That is why the Torah commands us only once to love our neighbour, but on thirty-six occasions commands us to love the stranger” (citing Babylonian Talmud Baba Metzia 59b). He explained:

A neighbour is one we love because he is like us. A stranger is one we are taught to love precisely because he is not like us. That is the Torah’s repeated and most powerful command. I believe it to be the greatest religious truth articulated in the past four thousand years.

Elsewhere, Rabbi Sacks suggested that Judaism is a religion of “sacred discontent,” challenging us not to accept the world and its tzures as it is, but rather to keep working to make it better. In his book To Heal a Fractured World – The Ethics of Responsibility he wrote, “In Judaism, faith is not acceptance but protest, against the world that is, in the name of the world that is not yet but ought to be.” He added,

Judaism is not peace of mind... I remain in awe at the challenge God has set us: to be different, iconoclasts of the politically correct, to be God’s question-mark against the conventional wisdom of the age, to build, to change, to ‘mend’ the world until it becomes a place worthy of the divine presence because we have learned to honour the image of God that is humankind.

Rabbi Sacks’ words echo Rabbi Tarfon’s famous teaching from Pirkei Avot, that “It is not incumbent upon you to complete the work, but neither are you at liberty to desist from it.”

These teachings, which I first encountered more than a decade ago, have stayed with me ever since and shape my vision of my rabbinate as one founded on inclusion and action.

Following Rabbi Sacks’ passing, his daughter Gila gave a moving hesped (eulogy). Since May 2020, Gila has served as director of Testing Strategy and Policy at the U.K.’s National Health Service. In her eulogy, she mentioned a conversation she had with a colleague about whether coronavirus was solvable, and observed: “I had a moment of clarity about what my dad had given me: that single belief that nothing was inevitable, that no problems were too big for people to try and solve. That things could always be changed and people could always change them: that belief shaped everything else.”

We all have Divine light within us, and we all have the capacity to heal our world. May this be Rabbi Lord Jonathan Sacks’ legacy and may his memory forever be for a blessing. Amen.

The Jewish Federation of Ottawa will hold an online event in memory of Rabbi Lord Jonathan Sacks Z”L on Tuesday December 8, 7:30 pm. Visit this link for more information or to register.