Nothing was published yesterday – June 2, 2020 – on the Ottawa Jewish Bulletin website and the only thing posted on our Facebook and Twitter accounts was an empty black box with the hashtag #BlackOutTuesday.

The Bulletin – along with the Jewish Federation of Ottawa, the Ottawa Jewish Community Foundation, the Ottawa Jewish Archives, the Centre for Israel and Jewish Affairs (CIJA) and many other organizations and individuals – was participating in a day of solidarity, reflection and symbolic protest against racism in the wake of the murder of George Floyd, a 46-year-old African American man, by white police officers in Minneapolis, Minnesota on May 25; a murder that was captured by multiple bystanders on video.

Floyd had been arrested for allegedly using a counterfeit $20 bill in a convenience store and, as shown on video, was in handcuffs and lying face down on the ground when a veteran police officer – who was fired and later charged with third degree murder and manslaughter – knelt on Floyd’s neck with his full weight on the knee and maintained the pressure for almost nine minutes as Floyd gasped for air and repeatedly said that he couldn’t breathe. A brutal scene to see. The officer continued to kneel on Floyd’s neck for about three minutes after he lost consciousness. Meanwhile, two other Minneapolis police officers knelt on lower parts of Floyd’s body as a third officer stood by. Those three other policemen were also fired but are yet to be charged in the case. [Update: Charges against the first officer have been upgraded to second degree murder and the other three have been charged with aiding and abetting second degree murder.]

Floyd was just the latest of many persons of colour who have died unjustly at the hands of police over the years in the United States (and we Canadians must not be complacent about this as it has also happened here too many times) but his death sparked protests around the United States the extent of which have not been seen since the assassination of Reverend Martin Luther King, Jr. in 1968. As I write, more than week after Floyd’s murder, the protests continue. And while the overwhelming majority of protesters have been peaceful, regretfully, some of the protests, particularly under the cover of darkness, have also been coopted by destructive looters and violent provocateurs whose actions have been counterproductive to the noble intentions of those demanding an end to police brutality and racial oppression.

After the horror of seeing the Floyd murder videos on television, I saw a selfie posted by my friend Vance Gilbert to his Facebook page that affected me deeply.

Vance, who lives in the Boston area, is an African American singer and songwriter and one of the cleverest and most entertaining stage performers I know. He’s been here in Ottawa a couple of times over the years to play at the folk festival. This is the photo and caption that Vance posted on Facebook on May 27: 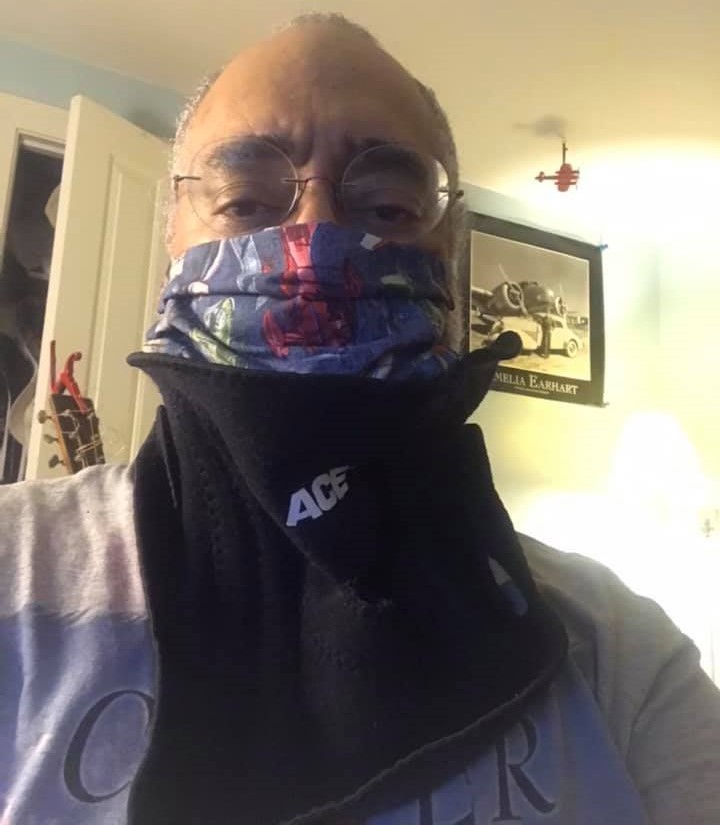 Vance was brilliantly using humour and satire to make a point.

“Don’t know whether to laugh or cry at the knee brace,” I wrote to him in the Facebook comments. “I guess I can laugh at how clever it is but cry over the truth that it tells.”

The murder of George Floyd has focussed attention on the deeply rooted racism in American society. And although much progress has been made over the years, the past few years have seen regression under a U.S. president whose modus operandi has been to stoke division, to sew a politics of resentment and who has, on too many occasions, employed both veiled and not-so-veiled racist rhetoric. I cannot forget that in 2017, when Colin Kaepernick and some other Black football players were protesting police brutality against African Americans by quietly and respectfully kneeling during pre-game singing of the “Star Spangled Banner,” this American president said they should be kicked out of the country.

I recall the Civil Rights Movement adage that “freedom is a constant struggle” and I am gratified to see that our Jewish community in North America – from major and grassroots organizations to the full spectrum of denominations – is acting in solidarity with the African American community. Here is a small sampling of statements from Jewish organizations:

“This week has reminded us yet again that we have a long way to go in our work towards a more just society for all. We will not stop fighting for a world free of racism and bigotry in all of its forms,” said a tweet released by The Jewish Federations of North America.

“Anti-Black racism is a scourge to which we are not immune in Canada. We stand with our friends in the Black community, to whom we say: with great anger & broken hearts, we denounce this hate, we recommit to working with you to combat & eliminate it,” said a tweet from CIJA, the advocacy agent for Jewish federations in Canada, including the Jewish Federation of Ottawa.

“Racism is not a thing of the past or simply a political issue. It is a real and present danger that must be met head on. … We call on all … to unite in the pursuit of justice and brotherly love and respect, regardless of race, creed or color. In this encounter, let us all seek greater understanding amongst our fellow men and women – all of whom are created in the image of God. Let us work in partnership toward eradicating all forms of bigotry and racism,” said a statement from the Orthodox Union.

“United in purpose, we will dismantle the systemic racism all too embedded still within American law enforcement and its justice system. The firing and we hope prosecution of the four Minneapolis police officers involved in this one egregious murder is a necessary step, but it cannot be the only action against structural injustices that have plagued generations and continue to this day. We must forever strive for a free and just society for all people,” said a statement released by The Rabbinical Assembly of the Conservative movement.

“The national rage expressed about the murder of Mr. Floyd reflects the depth of pain over the injustice that People of Color – and particularly Black men – have been subjected to throughout the generations. In recent months we have seen, yet again, too many devastating examples of persistent systemic racism, leading to the deaths not only of Mr. Floyd but of other precious souls, including Breonna Taylor and Ahmaud Arbery,” said Rabbi Jonah Dov Pesner, director of the Religious Action Center of Reform Judaism.

“We remember others before them: Eric Garner. Tamir Rice. Trayvon Martin. Sandra Bland. Oscar Grant. Philando Castile. Walter Scott. Terrence Crutcher. Samuel Dubose. Michael Brown. The list feels endless, and so too is our despair. But as we recite the Mourner’s Kaddish for them all, we say now, again: We will not sit idly by. Our country simply cannot achieve the values of ‘justice for all’ to which it aspires until we address ongoing racism in all sectors and at all levels of society. We remain in solidarity and action with the NAACP’s urgent #WeAreDoneDying campaign, whose policy demands cover areas of criminal justice, economic justice, health care, and voting, especially as the COVID-19 pandemic continues to disproportionately impact Black Americans,” added Rabbi Pesner.

“We must dismantle white supremacy now if we are to have any chance at building a more just and equitable world for all people. For all people – because we are committed to the core Jewish value that all people are created betzelem elokim – in the image of the divine – and are therefore equally deserving of full human dignity and safety. But also, specifically for our people – the Jews of Color within the Reconstructionist movement and beyond who face the oppression, pain, and fear of living under white supremacy every day. We must redouble our efforts to ensure that our Jewish communities provide a safe, supportive, loving and empowering haven for all of us, most especially Jews of Color,” said a statement posted by Reconstructing Judaism and the Reconstructionist Rabbinical Association.

From talking with Black friends over the years I am well aware that their reality differs from mine in many ways. And while many other African Americans have died unnecessarily and disproportionately at the hands of law enforcement officials, the murder of George Floyd during a pandemic that has brought death and economic hardship to so many seems to be a turning point. It is up to all of us to ensure that our societies and communities rise to the challenge epitomized in the principles of tikkun olam to repair our world. We cannot and must not be silent or indifferent.