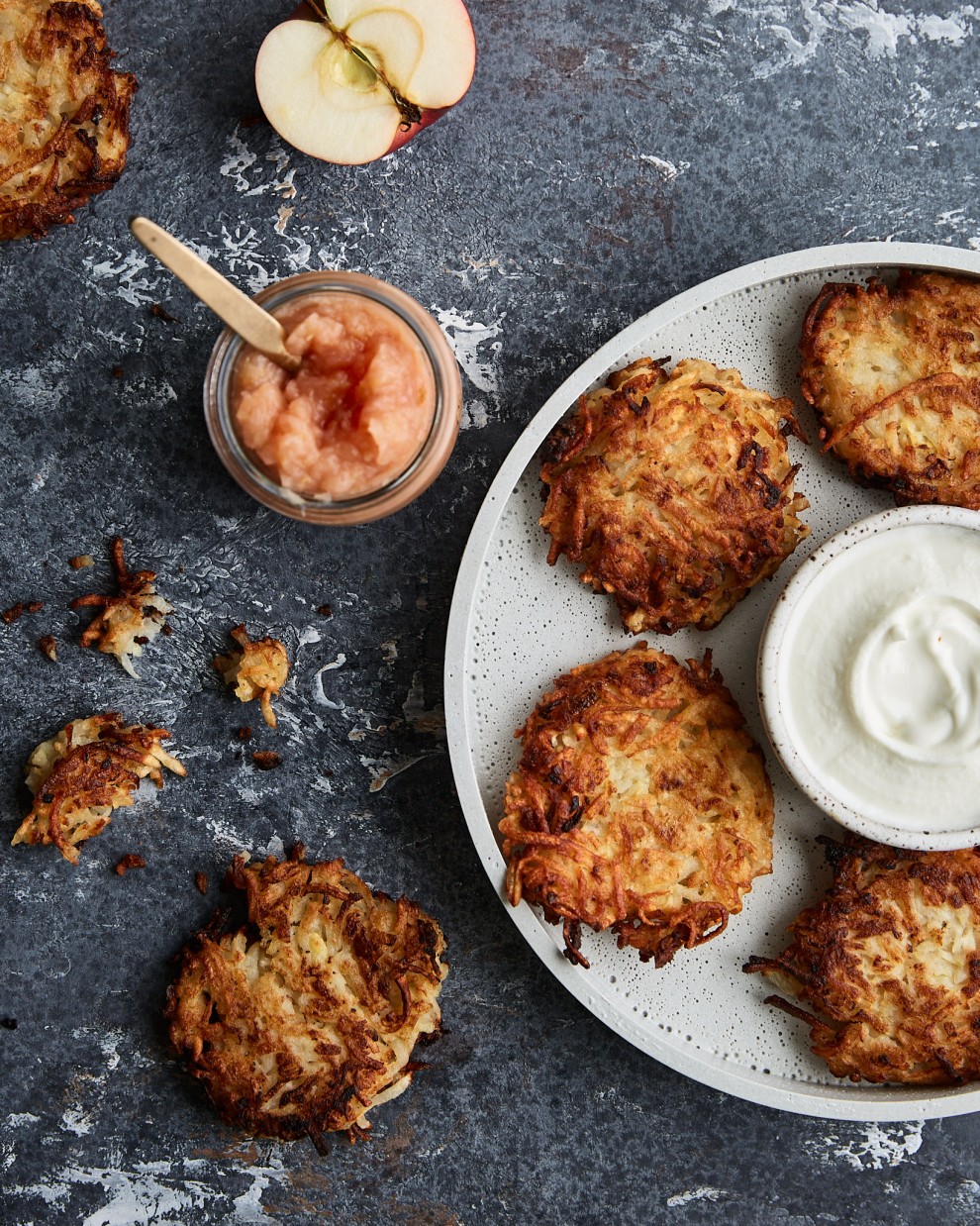 Apple Potato Latkes -  a traditional latke with a twist

My childhood memory of latkes is bittersweet. My mom made the most delicious latkes. Thin, lacy, and very crispy at the edges, they were held together with the bare minimum of egg and matzoh meal. She served them with apple sauce and sour cream. That's the sweet part of my childhood memory. The bitter part is related to my mom's very keen sense of smell. She was offended by the lingering scent of frying oil. Almost immediately after making latkes, she would perform an exorcism to cleanse the house of the offending odour. She used her secret blend of cleaning agents, a potent, lethal combination of Joy and Ajax.  Do not try this at home unless you are wearing a gas mask.

My husband, on the other hand, grew up with thick and creamy latkes. The potatoes were chopped quite fine and then fried, almost like a potato cake. They were served with ketchup. (ugh!)

For a few years, I made compromise latkes. Eventually, I won him over to the thin and lacy style. but he still eats them with ketchup.

As a blogger, I feel pressured to present something new and innovative every year. But the truth is, while my family smiled and nodded politely when I presented them with Sweet Potato and Brussels Sprouts Latkes one year, they just want traditional latkes.

A while ago, I came across a recipe for Apple-Potato Latkes with Cinnamon Sour Cream, from Melissa Clarke. I was intrigued by the addition of apples. We always eat latkes with applesauce, so adding apples to the batter wasn't such a radical idea. While they were delicious, they strayed too far from my ideal latke. She added 3 eggs and 2/3 cup of flour to the batter. They held together beautifully, but they were too eggy and cake-like for me.

I played around with the ratios and came up with a more traditional latke. The apple remained as a subtle hum in the background, but the predominant flavour is potato. The key to making latkes is muscle power. You need to rid the potatoes, and apples in this case, of all their excess moisture. About 80% of a potato is water. Apples contain 85% water. After shredding, gather up the mixture into a tea towel and squeeze out as much liquid as you can. Save the liquid that the apples and potatoes give up. After sitting for a few minutes, all the starch from the potato liquid will settle to the bottom of the bowl. Drain off the liquid and scrape that potato starch into the shredded mixture. It really helps keep the latkes together.

These latkes offer a slight variation on the classic latke, that even the die-hard traditionalists in your house will approve.

Pro tip: for pretty pink applesauce, don't peel your apples. Just quarter them and put them in a pot with a little water. Cover and cook over low heat until tender. Use a food mill to get rid of the skins and core. Flavour with a pinch of cinnamon if desired.

Makes about 12 latkes
2 Honeycrisp apples, peeled and cored
2 large russet potatoes, peeled
1 medium yellow onion, peeled
1 large egg
¼ cup all-purpose flour
2 teaspoons kosher salt
¼ teaspoons baking powder
½ teaspoon black pepper
vegetable oil, for frying
For serving:
Sour cream
Applesauce
1. Adjust oven rack to middle position, place rimmed baking sheet on rack, and heat oven to 200°F.
2. On the largest holes of a box grater, or in the food processor, with the grating disc, grate the apples, potatoes, and onions. Toss all the grated ingredients together in a large bowl.
3. Place half of potato mixture in centre of dish towel. Gather ends together and twist tightly to drain as much liquid as possible, reserving liquid in liquid measuring cup. When you think you have squeezed all the moisture out, squeeze one more time. The drier your mixture, the crispier your latkes will be.
4. Transfer drained potato mixture to second bowl and repeat process with remaining potato mixture. Set potato liquid aside and let stand so starch settles to bottom, at least 5 minutes.
5. Pour off water from reserved potato liquid, leaving potato starch in measuring cup. Add egg and stir until smooth. Pour egg mixture onto grated potato mixture. Add flour, salt, baking powder and pepper and mix well.
6. Set wire rack in clean-rimmed baking sheet and top with a triple layer of paper towels.
7. Heat ¼-inch depth of oil in 12-inch skillet over medium-high heat until shimmering but not smoking (350°F). Place ¼ cup mound of potato mixture in oil and press with nonstick spatula into a ⅓-inch-thick disk. Repeat until 4 latkes are in pan. Cook, adjusting heat so fat bubbles around latke edges, until golden brown on bottom, about 3 minutes. Turn and continue cooking until golden brown on second side, about 3 minutes longer.
8. Drain on paper towels and transfer to baking sheet in oven. Repeat with remaining potato mixture, adding oil to maintain ¼-inch depth and returning oil to 350°F between batches.
9. Serve with sour cream and applesauce.
TO MAKE AHEAD: Cooled latkes can be covered loosely with plastic wrap and held at room temperature for up to 4 hours. Alternatively, they can be frozen on baking sheet until firm, transferred to zipper-lock bag, and frozen for up to 1 month. Reheat latkes in 375-degree oven until crisp and hot, 3 minutes per side for room-temperature latkes and 6 minutes per side for frozen latkes.