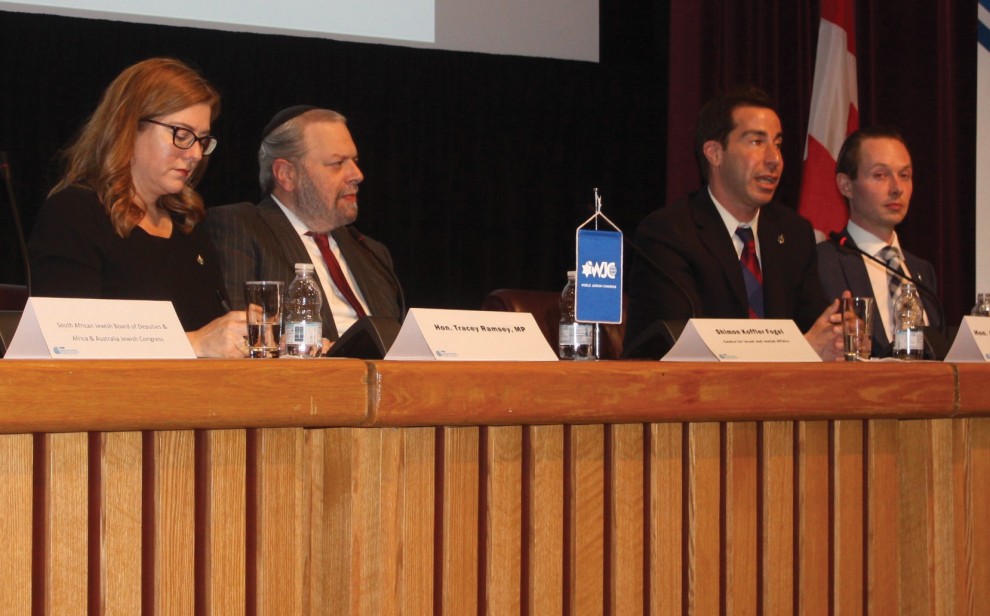 The World Jewish Congress (WJC) and the Centre for Israel and Jewish Affairs (CIJA) presented two panel discussions, May 15 at the Ministry of Foreign Affairs’ Lester B. Pearson Building, during the WJC governing board meetings, held this year in Ottawa.

The panels took place on the same day as the Christchurch Call to Action Summit, a global effort by some governments and tech companies to “eliminate terrorist and violent extremist content online.”

In the first discussion, Facebook executives Peter Stern and Kevin Chan were interviewed by Tamara Fathi of Ottawa, a member of WJC Jewish diplomatic corps.

In the aftermath of the Christchurch shooting – which was live-streamed by the perpetrator on Facebook – Stern said the site has introduced measures to tighten restrictions on its live-streaming service.

These measures include restricting the use of Facebook Live for those who have repeatedly violated community standards, as well as working with universities to “get smarter about identifying images and taking them down faster if they violate our policies,” said Stern.

When determining whether someone should be permanently banned from Facebook – as was the case for conspiracy theorist Alex Jones and alt-right polemicist Milo Yiannopoulos – Stern said the site looks at the “types of statements they’ve made on Facebook,” as well as whether they have “detailed connections to violence and organized hate.”

Stern said Holocaust denial is “one of the most difficult policy areas we deal with,” and that Facebook works regularly with Jewish organizations around the world, such as CIJA, to “promote accurate information about the Holocaust.”

Facebook’s policies do not allow people to “celebrate, defend or justify the Holocaust, or mock victims or survivors,” but Stern said posts cannot be removed solely on the grounds of being historically inaccurate.

“We are trying to protect people through our policies, not ideas or institutions,” Stern explained.

Chan said when it comes to moderating online content, Facebook wants “other people to share in the responsibility of making some of these tough decisions.” This is partially why Facebook has plans to create an external content oversight board, which would allow an independent body to adjudicate important decisions on content moderation.

Housefather said governments need to cooperate internationally to create “uniform definitions of hateful content” in order to make it easier for tech companies to regulate social media. He also spoke about the importance of educating Canadians on how to spot “fake” news. Housefather said one of the “main things that distresses me in my office” is the number of emails and letters he receives a week containing information that is “completely false.”

“People believe what they read on social media, so we need to teach digital literacy and teach our youth and our seniors what is and is not fake,” Housefather said.

Cooper said there is “no question” that online hate is a serious issue that is getting worse with time. He also spoke about the need for clear definitions of online hate that can be applied without “unduly killing free speech and expression.”

Tracey Ramsey, vice-chair of the House of Commons Standing Committee on Justice and Human Rights, acknowledged that many religious communities are feeling “fearful and uncertain” because of the “fostering of online hate that turns into real life violence.”

Ramsey said MPs have a role to play in the fight against online hate speech, and a simple way to do that is “calling out online hate when we see it.”