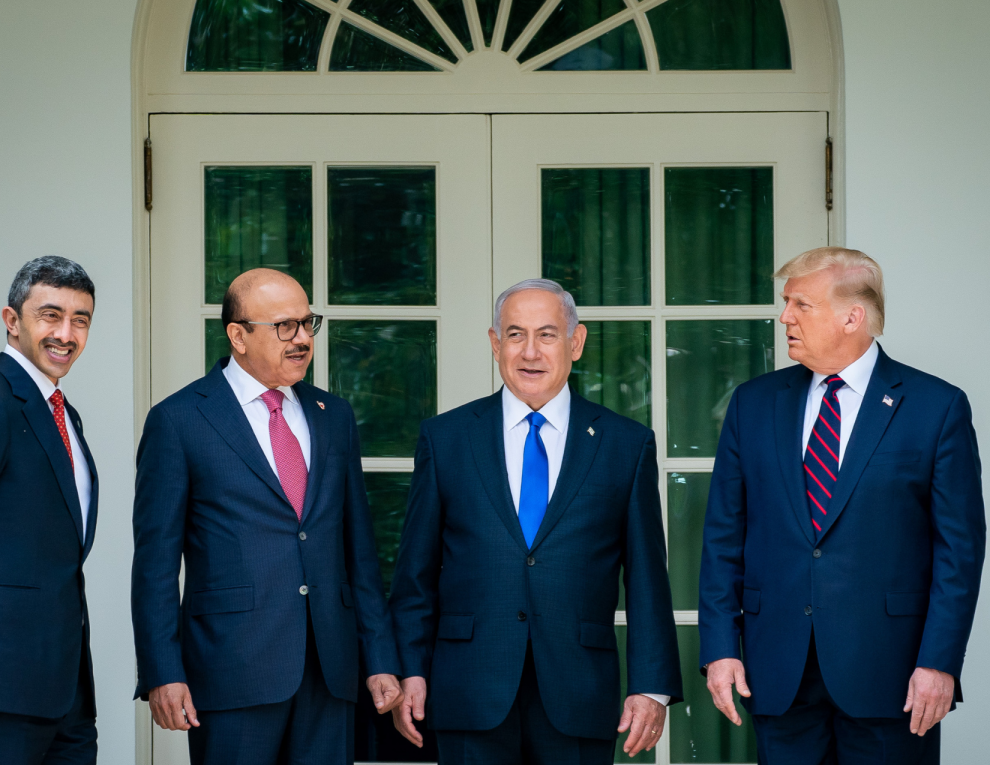 By Gabe Friedman and Ben Sales

(JTA) – Israel has signed diplomatic agreements with the United Arab Emirates (UAE) and Bahrain, two Arab countries, and the word “historic” has been used a lot.

For Israel and the region, the so-called Abraham Accords signings truly were historic: There was a big ceremony on the White House Lawn, which conjured memories of Yitzhak Rabin and Yasser Arafat shaking hands after signing the Oslo Accords. U.S. President Donald Trump and Israeli Prime Minister Benjamin Netanyahu each have been nominated for the Nobel Peace Prize for their roles in brokering the deals. Trump supporters are claiming that this president has done more for Israel than anyone in history.

But what’s actually in the agreements? And what do they change? Is this truly the “dawn of a new Middle East,” as Trump claims?

What the deals say

Three separate documents were signed on Tuesday: the separate pacts Israel has with the UAE and Bahrain, and a general statement by all the parties involved, including the United States, which played a key role in the negotiation process.

The general statement, titled the Abraham Accords Declaration, affirms that all the signees agree to “pursue a vision of peace, security, and prosperity in the Middle East and around the world.” It also notably includes language about the ties of the three Abrahamic religions (Judaism, Islam and Christianity) and a condemnation of “radicalization and conflict” – a resonant note about a region whose conflicts have given rise to terrorism.

Neither of the individual agreements contain in-depth detail, but the Israel-UAE treaty is more developed because it was announced first, nearly a month earlier. Bahrain announced its agreement with Israel last week and agreed to join the White House ceremony relatively late in the game.

In the course of four pages, the Israel-UAE document says both nations will establish “full normalization of bilateral ties,” embassies with resident ambassadors and cooperation in an array of areas, from investment to tourism to agriculture. It also calls for both parties to “foster mutual understanding, respect, coexistence and a culture of peace between their societies in the spirit of their common ancestor, Abraham.”

The shorter Israel-Bahrain document says that the countries, in addition to opening embassies for the first time, will hammer out specific agreements in a similarly wide range of areas in the coming weeks.

Why these treaties are significant

Since it was founded in 1948, Israel has hoped for acceptance in its region. This treaty marks two more steps in that direction.

Shortly after its founding, Israel was attacked by a coalition of Arab armies, and for decades Israel was not recognized by any nation in the Middle East – the countries did not talk to Israel, trade with Israel or treat Israel like a legitimate state. Israelis could not travel to any Arab country and vice versa.

That changed in 1979 when Egypt, which had fought four wars with Israel over the span of 25 years, became the first Arab country to sign a peace treaty with the Jewish state. In 1994, Jordan followed suit.

But that’s just two Arab countries among nearly two dozen. Throughout its 72-year existence, at least publicly, Israel has been treated as an illegitimate state by nearly all its neighbours and been seen as an intruder that stole land from the Palestinians.

By establishing these diplomatic ties, the UAE and Bahrain are recognizing Israel as a country that is here to stay in the region. It’s a sign that the wider narrative about Israel in the Middle East could be beginning to change.

Trump and his team are confident that these deals may lead to a domino effect of more countries signing normalization treaties with Israel. As noted, both countries did not announce they were signing deals with Israel at the same time – the UAE led the way, and Bahrain joined the effort almost a month later. The U.S. and Israel hope that more countries follow.

There is one big difference between these agreements and the ones Israel signed with Egypt and Jordan: Those were peace treaties and these aren’t.

Before signing, Egypt and Jordan were technically at war with the Jewish state and had fought on multiple occasions. Both Arab nations had tried to destroy Israel, which conquered territory from each of them in 1967. That’s why those treaties were a big deal: They ended overt, deadly hostilities.

Both Egypt and Jordan border Israel, also making the treaties more significant. They removed immediate threats to Israel and allowed Israel to cooperate openly with two of its neighbours on border concerns.

Neither the UAE nor Bahrain have ever attacked Israel; nor has Israel attacked them. So, there was no peace to be made. And unlike with Egypt and Jordan, Israel and the two countries are far from each other.

But in some ways, Israelis are more excited about these treaties

Israel hasn’t been actively worried about a conventional war with its neighbours for a long time now. It has the strongest military in the region, a close alliance with the United States and, allegedly, a stockpile of nuclear weapons.

Israelis are more anxious about threats from militant groups on their borders, such as Hamas and Hezbollah, or the prospect of Iran – an agitator that is also the enemy of countries such as the UAE and Bahrain – obtaining nuclear weapons. They’re not concerned that Syrian planes are going to start bombing Tel Aviv or that Lebanese tanks will roll in from the north.

What they want is to be treated like a normal country. These agreements might make Israelis safer on paper, but Israelis are especially excited about the tangible benefits they will receive. The same goes for the Emiratis and Bahrainis.

Israelis can now travel to the UAE and Bahrain, and vice versa, and businesses in Israel will be able to trade with both countries. Following decades of clandestine contacts, the countries can collaborate openly on military intelligence, technological development and countering regional threats like Iran. The deals also buy all three parties good will with the United States, which has long advocated for cooperation in the Middle East.

Speaking of travel, there should be plenty. The UAE’s two largest cities are Dubai and Abu Dhabi, the former being one of the most luxurious tourism hubs on the planet, full of glitzy world-renowned nightlife. It’s sure to attract droves of Israeli travelers once international travel is safe again.

In fact, The Jerusalem Post has already released a travel guide for Israelis thinking about Dubai, complete with notes on everything from Arabic cultural tours to Ski Dubai, the Middle East’s largest indoor ski resort. (Remember, Israel has only one ski mountain.)

Dubai is preparing for Israeli tourists, too – hungry ones. Kosher food is coming soon on flights to the Emirates and in the city’s hotels. This follows a kosher food service started last year by a Jewish Dubai resident. The United Arab Emirates has a small Jewish community as well and is building a complex in Abu Dhabi that will contain three houses of worship – a mosque, a church and a synagogue.

Expect similar news out of Bahrain, which also has a tiny Jewish community with a fascinating history.

Israel, which is the site of several Muslim holy sites, including the Al-Aqsa Mosque and Noble Sanctuary – the Temple Mount – is hoping that UAE and Bahrain residents will return the favour and give Israel’s flagging economy a needed boost.

Not everyone is happy

Trump is obviously elated that these treaties came together – especially at the tail end of an election season in which he has faced low approval ratings during a pandemic. The same applies to Netanyahu, who has spoken for years about peace with the wider Arab world even as the Israeli-Palestinian conflict has festered. This also marks a significant (indeed, historic) achievement for Netanyahu even as he faces protests over his handling of COVID-19 and his ongoing trial for corruption.

But the player who might feel most vindicated is Jared Kushner, Trump’s senior adviser and point man on Middle East peace, as well his son-in-law. Critics had mocked the real estate developer’s role, saying he was ill qualified to take on an international diplomacy portfolio. He can fight that criticism now in the form of the biggest peace development in decades.

Even domestic opponents of Netanyahu and Trump are pleased by the Abraham Accords. Joe Biden, the Democratic candidate for president, said in a statement that he welcomed the treaty and that “It is good to see others in the Middle East recognizing Israel and even welcoming it as a partner.” The leader of Israel’s opposition, Yair Lapid, tweeted, “Congratulations to Israel, the UAE and Bahrain on this historic agreement” – before a tweetstorm castigating Netanyahu for Israel’s coronavirus policy. American Jewish groups from left to right also praised the deal.

These agreements prove that theory wrong. While Israel has made certain commitments not to annex parts of the West Bank in the short term – but hasn’t totally ruled it out – it has not committed to any concrete sacrifices on the Palestinian front. The UAE and Bahrain have stated in the agreements that they believe the deals with Israel will advance the cause of peace.

The treaties prompted a rare show of unity between Fatah and Hamas, the two rival Palestinian groups that control the Gaza Strip and areas of the West Bank, respectively. The Palestinians’ ambassador to the United Kingdom, Husam Zomlot, tweeted that the treaty was “another Trump media stunt to cover his failure to bully the Palestinian people & leadership into submission.”

“If you really wish to ‘advance the cause of peace, dignity, & economic opportunity for the Palestinian people’ how about ending Israel’s ruthless occupation & its theft of our land & resources?” tweeted long-time Palestinian official Hanan Ashrawi, quoting a joint declaration of the United States, Israel and Bahrain on Sept. 11. “Coercing & cajoling Arabs to normalise with Israel will not bring you peace or dignity.”