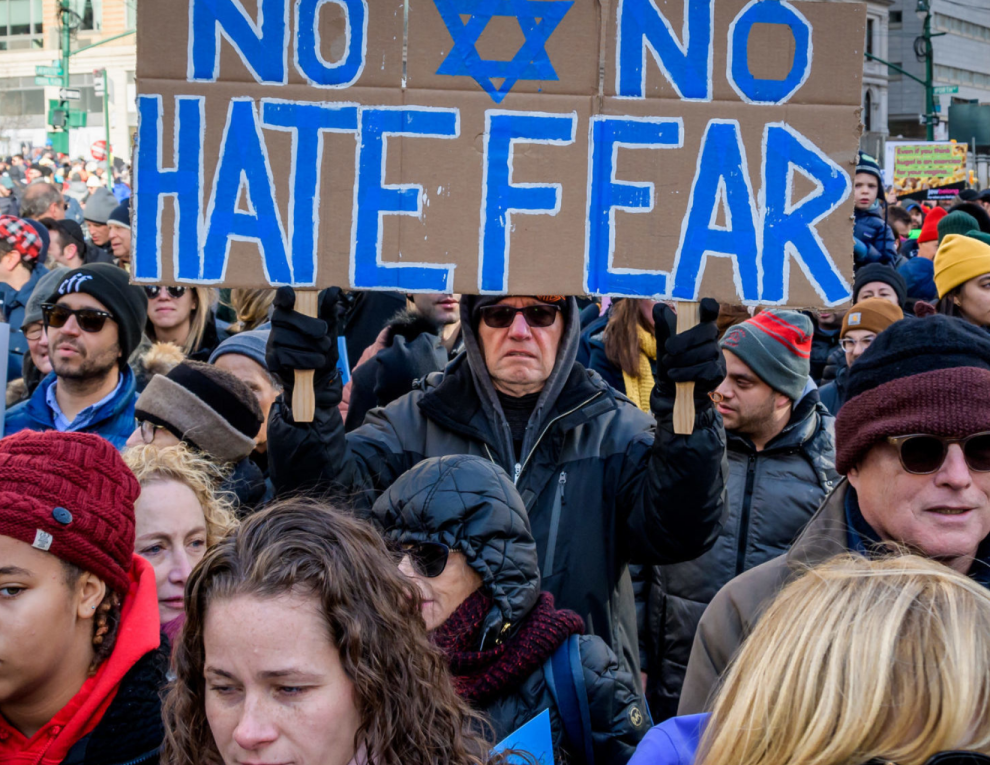 Almost all U.S. Jews say antisemitism is a problem. Half of Americans don’t know what it means.

(JTA) – Nearly half of Americans don’t know what the phrase “antisemitism” means.

That’s one takeaway from two surveys published Monday by the American Jewish Committee (AJC). The surveys asked Jews and the general American public about antisemitism in the United States.

The Jewish survey found that a large majority of Jews consider antisemitism a problem, and that most see it as a problem on the right and in the Republican Party. Those findings were in line with what the AJC, a nonpartisan advocacy organization, found when it surveyed American Jews last year.

But nearly half of Americans overall say they have seen antagonism against Jews either online or in person during the past five years, suggesting that respondents may be familiar with the reality of anti-Jewish bigotry but unfamiliar with the term “antisemitism.”

Holly Huffnagle, AJC’s U.S. director for combating antisemitism, said she believes using the term antisemitism is important because it covers a broad historical spectrum of how anti-Jewish discrimination manifests – from conspiracy theories to stereotypes to slurs.

“I think this is an opportunity for education on what antisemitism is,” she said. “If someone would have said ‘Jew-hatred, do you know what that is,’ or some other term, I think we would have seen that number a little bit less, but we need the term antisemitism to be understood.”

The surveys were taken in September and early October and included 1,010 Americans overall and 1,334 Jews. The margin of error for the general America sample was 3.7 per cent and 4.2 per cent for the Jewish sample.

The poll of Jews found that 82 per cent say antisemitism in the United States has increased during the past five years. The survey numbers for Jews are statistically equivalent to those from an AJC survey taken last year, which found that 88 per cent of Jews saw antisemitism as a problem in the U.S. and 84 per cent said it had increased during the past five years.

In this year’s survey, 43 per cent of Jews said the status of Jews in the United States is less secure than it was a year ago, while 52 per cent say it’s about the same and four per cent say it’s more secure. Those numbers are also essentially the same as last year’s.

A quarter of Jews say they have been targeted with an antisemitic attack in person over the past five years. During the same period, 22 per cent have experienced antisemitism online and three per cent have been victim to an antisemitic physical attack. The poll found that about a quarter of Jews avoid publicly wearing things that identify them as Jewish and that the same percentage avoid identifying as Jews online.

“What American Jews and the general public are saying in these surveys, for us, is a clarion call for a stepped-up, multi-pronged response to rising antisemitism in the United States,” said AJC CEO David Harris in a statement.

Huffnagle said that the data shows AJC “need[s] to increase our efforts as an organization to fight the far right.”

The survey also found that a majority of Jews are at least somewhat familiar with the BDS movement, which encourages boycotts, divestment and sanctions against Israel, and that 37 per cent consider it antisemitic. An additional 43 per cent say it has some antisemitic supporters. Fifteen percent say the movement is not antisemitic.

More than three-quarters of Jews also agree it’s antisemitic to say “Israel has no right to exist,” “The U.S. government only supports Israel because of Jewish money,” and “American Jews are more loyal to Israel than to America.”

While 74 per cent of Americans overall believe that saying “Israel has no right to exist” is antisemitic, 55 per cent believe it’s antisemitic to say “The U.S. government only supports Israel because of Jewish money,” and half say the statement “American Jews are more loyal to Israel than to America” is antisemitic.

Photo: Thousands of New Yorkers of all backgrounds convened at the “No Hate. No Fear” solidarity march against antisemitism in January 2020. (Erik McGregor/LightRocket via Getty Images)