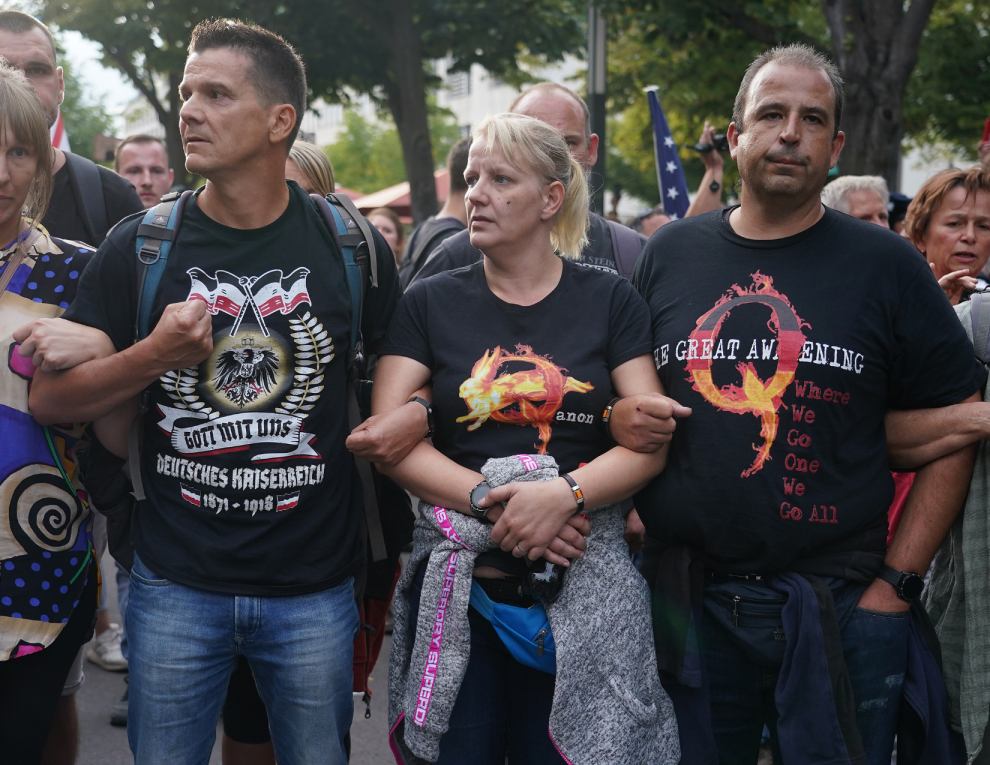 (JTA) – Scott Wiener, a California state senator, has been barraged with antisemitic attacks online, including one falsely accusing him of promoting “Jewish pedophilia.”

A Republican congressional candidate, Marjorie Taylor Greene, appeared to accuse George Soros and the Rothschild family of being involved in a cabal of Democratic pedophiles. On Twitter, she has repeatedly called Soros, a Jewish billionaire, of being an “enemy of the people.”

On Sept. 11, a Facebook group’s post claimed that an Israeli company knew about the 2001 terrorist attacks in advance.

These smears have at least one thing in common: They come from followers of QAnon, the vast – and patently false – theory that Democrats across the U.S. are running a secret cabal to abduct and abuse children, harvest their blood and defeat Donald Trump.

But are those antisemitic beliefs baked into QAnon? Or do some of the posters happen to be antisemites while believing in QAnon?

The answer, according to those who study extremism and have been watching the meteoric ascent of QAnon, is the former: QAnon is inherently antisemitic – and only growing more so. Researchers are still gathering data, but are seeing the trend pop up globally. The New York Times reported that there are 200,000 QAnon social media accounts on Germany’s far right, and that the conspiracy was part of what inspired a faction of German extremists to storm its parliament in August.

“In terms of qualitative intelligence, there’s no doubt that it’s becoming more antisemitic,” said Joel Finkelstein, the director of the Network Contagion Research Institute, which studies hate and incitement on social media, and is gathering data on antisemitism in QAnon. “There’s just no doubt about that.”

The QAnon theory has become increasingly popular and visible in recent months, in the United States and abroad. According to NBC, its Facebook groups boasted millions of members in early August. Republican candidates for Congress have supported it, and people wearing or carrying Q slogans have shown up to mainstream political rallies. Even as some Republican leaders have condemned the theory, Trump has declined to disavow it.

The theory is expansive and elastic, stretching to include many different tropes in the service of its sweeping scope. That can make its core antisemitism hard to detect or track.

But the claim that rich Jews, including the Rothschild banking family, secretly control the world has long been a recurring feature. And other elements that don’t explicitly mention Jews also have antisemitic resonance, like the blood libel, an age-old antisemitic canard claiming that Jews kill Christian children to harvest their blood for ritual purposes.

“This whole blood libel is very prominent there, the idea of kidnapping children for blood,” said Magda Teter, a Jewish studies professor and author of Blood Libel: On the Trail of an Antisemitic Myth. “People are going to start Googling ‘killing children for blood.’ That will lead them to antisemitism even if they may not be initially inclined.”

In recent weeks, QAnon has begun to attract heightened scrutiny, many others have pressed that case. One was the founder of the group Genocide Watch, former George Mason University professor of genocide studies Gregory Stanton, who published a piece earlier this month titled “QAnon is a Nazi cult, rebranded.”

QAnon is the latest version of “the conspiracy ‘revealed’ in the most influential anti-Jewish pamphlet of all time. It was called Protocols of the Elders of Zion,” Stanton wrote in his essay. He also said QAnon is a revamped take on the blood libel, which was spread in modern times through the “Protocols.”

In fact, according to Eric Feinberg, vice-president of content moderation at the Coalition for a Safer Web, which aims to combat extremism online, references to the Elders of Zion and to a “Zionist-occupied government” are common on QAnon forums. He said QAnon adherents are latching on to widespread Jewish support for Democrats, especially as the election approaches.

“In terms of Elders of Zion, calling out Hollywood, which tends to be Jewish, calling out specific Jewish congresspeople as pedophiles,” said Feinberg, describing antisemitic ideas found in QAnon. “Also, it tends to be that Jewish people align more with Democrats. They use that against us to basically say that Jews are pedophiles.”

Some of QAnon’s supporters are surely aware that they are targeting Jews. But the ideas of harvesting children’s blood and controlling the world through a secret cabal are antisemitic even if the growing numbers of QAnon adherents don’t realize it, or don’t directly refer to Jews, Teter said. These ideas are so old and established, she said, that they function as codes for antisemitism and obviate the need to mention Jews directly.

Teter added that these ideas will act as dog whistles for neo-Nazis and other antisemites, such that they have the effect of propagating antisemitism regardless of their original intent.

“If they are going to mention the whole package of conspiracy, of blood, of media, of money, even without mentioning Jews, you can definitely get that kind of implicit antisemitic message about controlling the media, government and whatnot,” she said. “You don’t have to be explicit and then those who know, know.”

The way that QAnon ideas tend to propagate means that large numbers of people are encountering and absorbing antisemitic tropes all the time. Feinberg said his research has found that QAnon content across social media platforms is increasingly coming from Telegram, a messaging app that also has open groups where users can see and share public content. That makes the content more easily shareable to mainstream social media platforms than, say, an entry on the extremist message board 8kun, and also gives rise to “a boomerang or circular ecosystem” whereby QAnon ideas move rapidly across platforms with little evidence of their origins.

The fact that certain messages on Telegram are encrypted, and that the company is based outside of the United States and therefore not fully subject to U.S. oversight, also make the messages harder to track, Feinberg said.

“The Rothschilds, all of that Elders of Zion stuff, you can actually search that on Telegram and pick that up,” he said. “They’re using it in this regard especially because Jews tend to be Democrats and they say most of the media is controlled or owned by Jewish people. So, they use that against us because they believe Trump is the saviour.”

Photo: A group of Germans who follow the QAnon conspiracy theory protest in Berlin, Aug. 29, 2020. That day, inspired by QAnon, a group of German extremists stormed the country's parliament. (Sean Gallup/Getty Images)