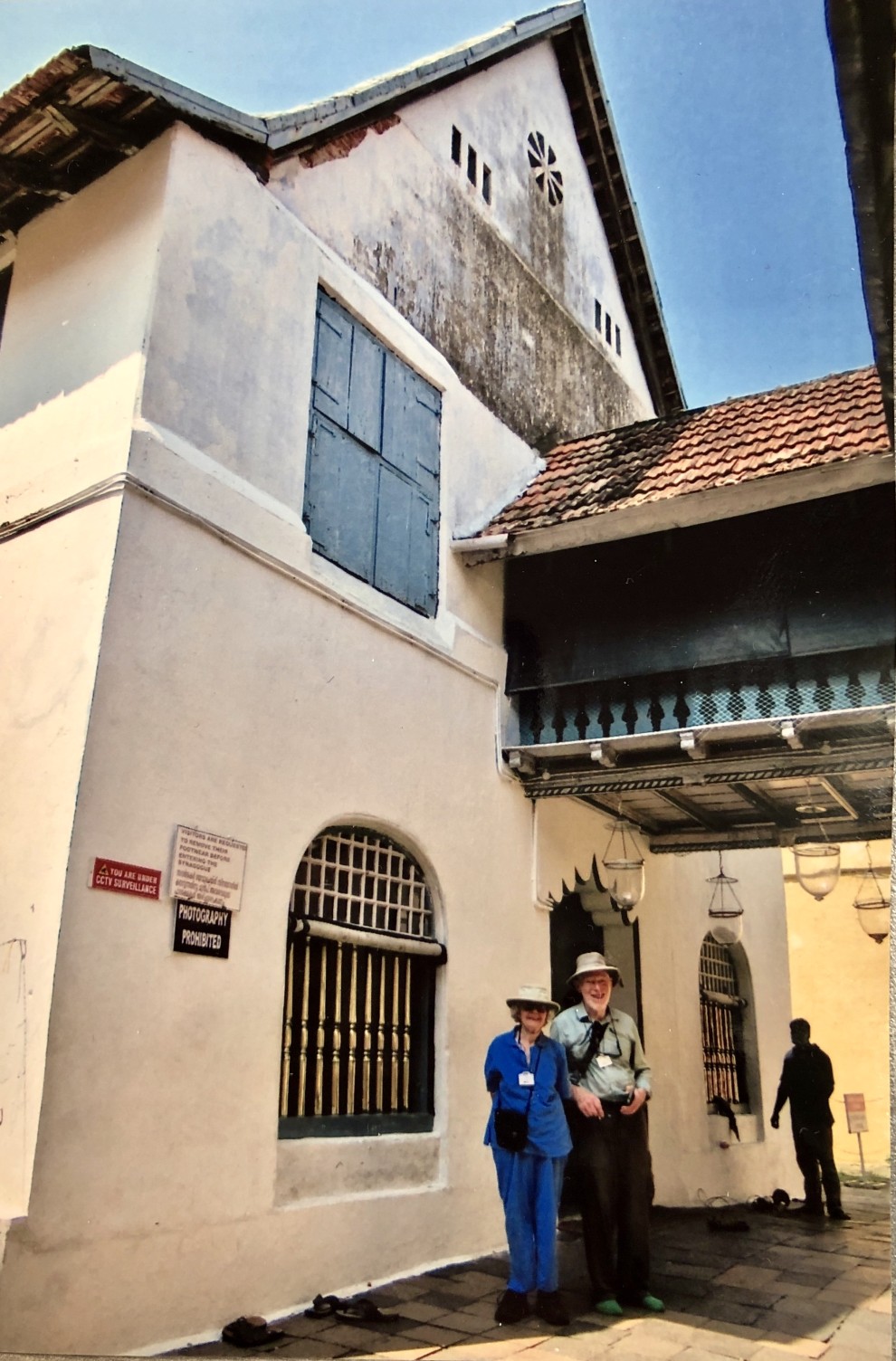 Our visit to Jewish heritage site in India

By David B. Brooks

On a trip last November, Ottawans Toby and David Brooks visited the Paradesi Synagogue in Kochi – the oldest continuously used synagogue in the British Commonwealth.

There are not many Jewish sites in all of India, but one of the best, if not the best, is found in the city of Kochi (formerly called Cochin) in the state of Kerala. Kochi offers one of India’s best ports on the Arabian Sea, and was the site of the first English settlement in India. Perhaps it is not surprising that, as one of the main sources for spices and tropical fruits across the then known world, Jewish merchants would have found their way to Kochi by sometime in the seventh or eighth centuries CE. Stories place Jews there in the first century as the Romans dispersed Jerusalem’s Jews after destruction of the Second Temple.

Most evidence indicates that Kochi had a nascent Jewish community as early as the fourth century CE, and that the community had grown to several thousand people with seven synagogues by the middle ages. Most of them were located in the Mattancherry district of the city, close to the port and not far from the British palace and fort. Alas, only the Paradesi Synagogue, which was built in 1586 on a site that formerly held a synagogue built nearly 250 years earlier, remains open today. However, with Kochi’s Jewish population today reduced to a few dozen individuals, services are now held only on Shabbat and Jewish holidays. Even so, it does remain the oldest continuously used synagogue in the British Commonwealth of Nations. At other times, it is one of Kochi’s premier tourist attractions.

Toby and I visited the old Jewish area of Kochi (labelled “Jewtown” today, as it used to be according to old records) and the Paradesi Synagogue in November of 2018. Paradesi means “foreigner,” so designated to distinguish these Sephardic Jews from other Jews in more northerly India. It was as much a sad as a happy visit for us. Perhaps the happiest point was learning that the Jewish community co-existed in a pleasant if competitive relationships with local Dutch, Portuguese, and British trading communities. While there must have been tensions from time to time – just think of a large cargo ship docking on Shabbat – the limited historical records of the day make no reference to anti-Semitism. 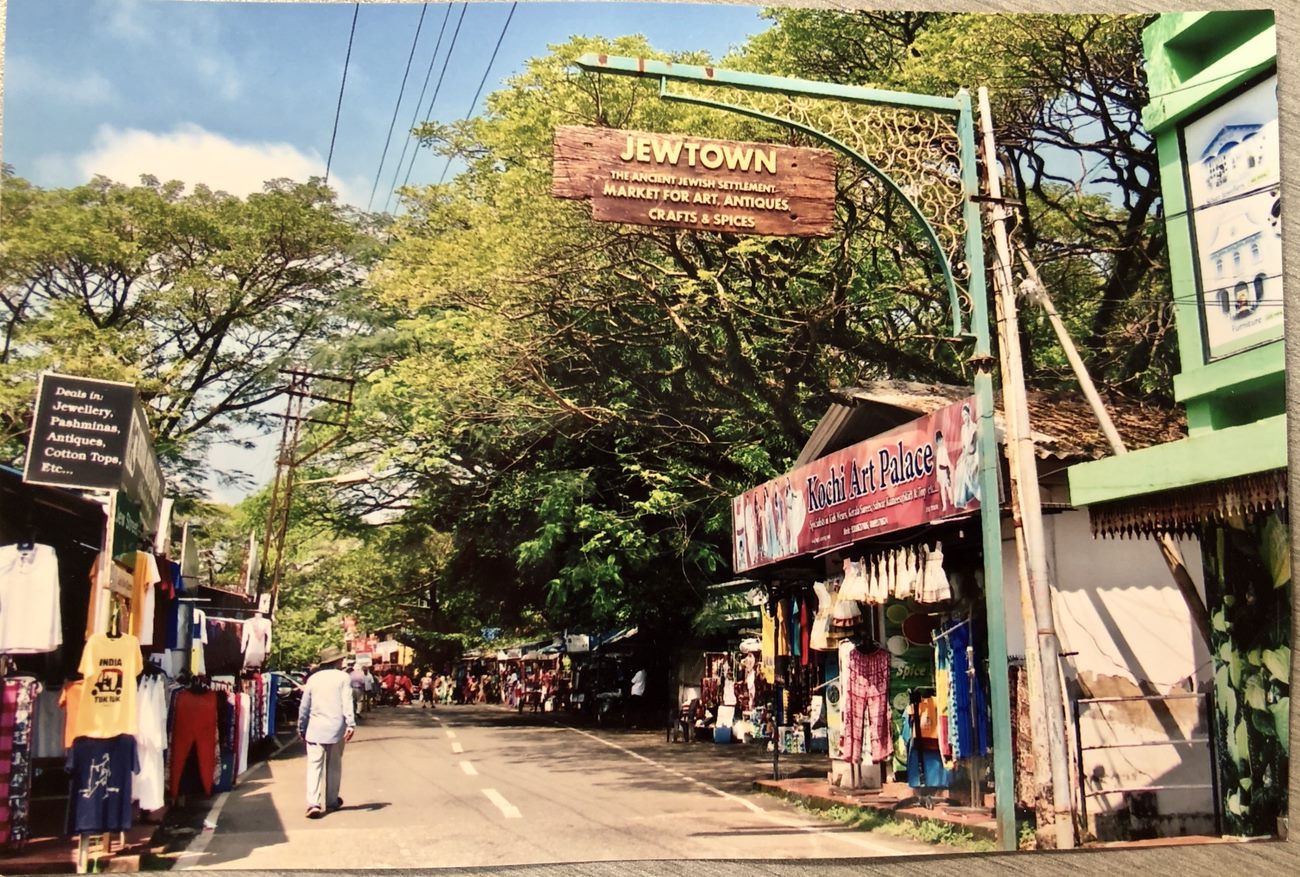 The entrance to the "Jewtown" neighborhood in Kochi, India.

Apart from the synagogue itself, about all that one finds today of the old Jewish quarter is a plethora of shops selling everything from Stars of David and menorahs to Hindu and Buddhist religious materials, and, T-shirts, post cards, and Indian saris, all in the same shops.

The synagogue itself is a relatively small but well-built white two-story building near the end of a typically narrow street, bordered by tourist shops. The city has placed signs directing the visitor to the synagogue at corners of nearby main roads. The building consists of an anteroom with a gabbai to keep tourists in order and the sanctuary itself with a surprisingly large women’s gallery, including its own bimah, upstairs.

The visit starts with a surprise. Immediately upon arrival, the gabbai asks everyone to take off shoes. For most tourists, who have likely spent the previous week or so visiting Hindu or Buddhist temples, where removal of shoes is de rigueur, this, no doubt, just seems to be local practice.  But that is not at all the issue. Rather, the gabbai’s request is intended to help preserve the beautiful blue willow Chinese porcelain tiles that cover the floor. Even they come with a bit of a mystery. Though dating from the 1800s, well after construction of the synagogue, information at the shul says that the tiles were a gift from the Dutch community to the Jewish community. However, some websites suggest they were brought to Kochi by a Jewish merchant, or by convincing some local rajah that the tiles were made with cow’s blood, which made them repugnant to Hindus. 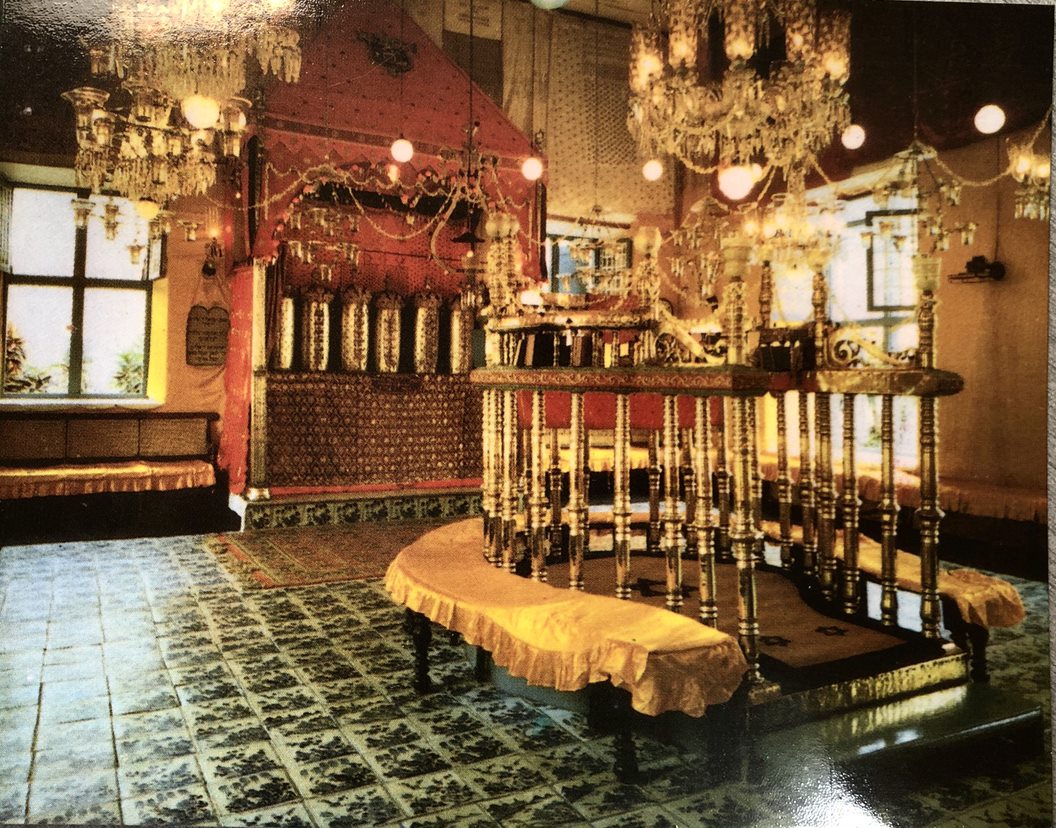 The interior of the Paradesi Synagogue in Kochi, India.

The next thing a visitor will note inside the sanctuary is the ceiling, which is covered, wall-to-wall, with crystal chandeliers. For this, we found no explanation. It seems that they were just added over time. Clearly, one is the eternal light, but it is barely visible among the others. The lighting is now all electrified, but it looks as if it may have originally held candles.

To the surprise of most North American tourists, the bimah appears in the middle of the sanctuary rather than at end of the room, and therefore lacks any apparent connection to the Aron HaKodesh on the eastern wall, which also serves to conceal all of the synagogue’s real treasures.

That observation gets us to the saddest part of our visit. There is next to no explanation for non-Jews, who surely make up the great bulk of tourists, about a Jewish service nor about objects found in the sanctuary. Neither is there any translation of the numerous Hebrew phrases that decorate the sanctuary. A short brochure is available on the history of the Jewish community in Kerala, as are some postcards of the interior of the synagogue, where photographs are forbidden.

This gap led to an amusing experience as Toby and I appeared to be the only Jews in the synagogue at the time of our visit, and we started to respond to questions from our own tour-mates when we both found ourselves at the centre of a cluster of tourists asking questions. I have no doubt that we could have stayed much longer than we did, but we began to impinge on the gabbai’s two-hour closing time for lunch.

Despite the numerous disappointments, it was thrilling to visit the Paradesi Synagogue in Kochi. It is listed in all the guidebooks about the city, and it forms an important part of the history of Jews in India. The visit remains among the most vibrant memories of our trip, and of our brief stint as tour guides.