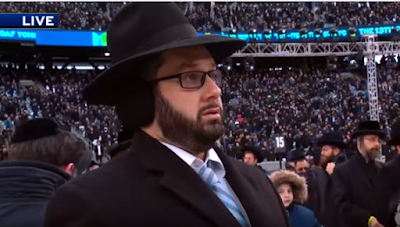 On January 1, a time when many are partying and drinking, I found myself in a football stadium, surrounded by over 90,000 people celebrating and rejoicing. Although this stadium was only a few km from the home I grew up in, we were not there celebrating a win by my favourite football team. In fact, we were not attending a football game. Instead, I had the awesome privilege of attending the 13th global Siyum HaShas at Metlife Stadium in East Rutherford, New Jersey.

The Siyum HaShas is the celebration of the completion of studying the entire Talmud through an initiative called Daf Yomi (daily page). Those who participate in Daf Yomi study one page of Talmud each day and complete all 2,711 pages over the course of seven-and-a-half years. Daf Yomi was started by Rabbi Meir Shapiro in 1923 and has continued, uninterrupted, ever since.

The Siyum HaShas was beautiful, powerful and inspirational for all participants and attendees. There were speeches, prayers, music and dancing. Everyone who participated in the Siyum, either in person or electronically, could not help but be touched and uplifted by its holiness, and by the deep joy of celebrating the study of Talmud. Aside from participants, many letters and notes have been received from stadium staff and volunteers, sharing the impression that the Siyum had on them as well.

While there were so many take home messages from the Siyum, for me, there was one aspect that touched me very deeply and has pushed me to become a better rabbi and a better Jew.

There are many reasons why people gather and celebrate. Approximately 12 hours before the Siyum Hashas began, over one million people gathered on the other side of the Hudson River to watch the ball drop in Times Square, celebrating the start of 2020. Metlife Stadium has (occasionally) been the site of celebrations after a successful Giants or Jets win. As Jews, we have many opportunities to celebrate. We celebrate our holidays, our births, bar mitzvahs and weddings. We celebrate our freedom, our relative safety, and our many accomplishments. We have contributed to the world of science and technology, built beautiful communities and institutions, in North America, and all over the world.

But that’s not why we celebrated on that cold day in New Jersey. When we celebrated, we were rejoicing over the study of Torah! Some of the participants in the Siyum had completed the seven-and-a-half year study cycle, but many, myself included, had not. Yet, all of us who were there celebrating, made a profound statement to ourselves, and to the world. We as Jews came together to celebrate the study of Torah. Torah is something that every Jew, regardless of age, background and affiliation, can and must connect with. How can we connect to God without reading the words that He wrote? How can we live our lives, without studying the masterful blueprint that He gave to us?

Whether you study Daf Yomi, Parsha, Kabbalah or Halachah (Jewish law), we all must find our own unique places in Torah. The Talmud points out that there are 600,000 letters in the Torah. This is the same number of Jews that received the Torah. This number connection teaches us that each Jew has a letter, or a part of the Torah, that he or she can connect to, in one’s own way.

In the aftermath of this beautiful event, I was inspired to join the new Daf Yomi cycle. God willing, I too will be able to complete the cycle and celebrate my own studying at its completion on June 7, 2027! And if Daf Yomi doesn’t do it for you – and it’s certainly not for everyone – pick something else. Grab a book, join a class, listen to a podcast, or study with a friend. And no matter what you choose, make sure to join us for the next Siyum, in seven-and-a-half years. Looking forward to celebrating with you!