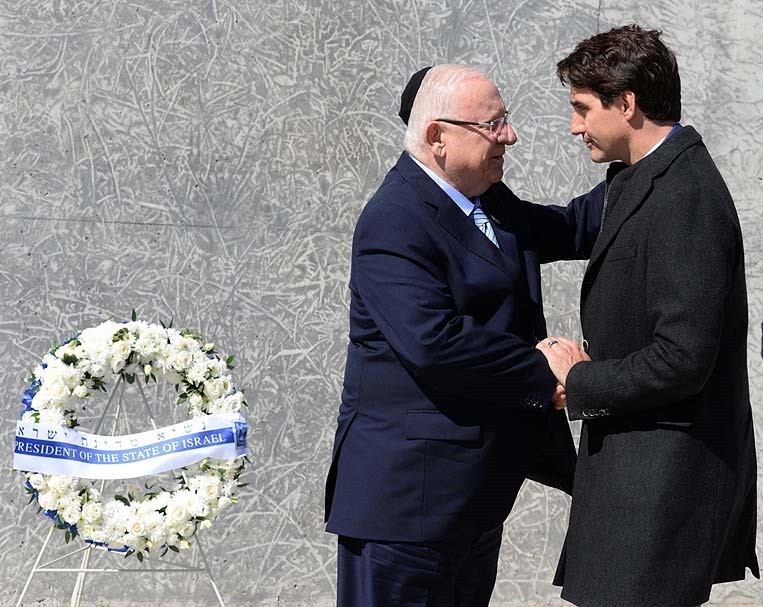 Although Yom HaShoah took place this year on May 1-2, the National Holocaust Remembrance Day ceremony presented by the Canadian Society for Yad Vashem (CSYV) was held at the Canadian War Museum in Ottawa on May 7. The theme of this year’s ceremony was “Struggle for Survival: Jewish Resistance during the Holocaust.”

“While the vast majority of those who participated in resistance efforts against the Nazi regime did not outlive the Shoah, their acts of bravery remain a testament to the spirit of the people who endured,” said CSYV National Chair Fran Sonshine.

The ceremony was attended by hundreds of guests, including Holocaust survivors, members of Parliament, Supreme Court justices, and diplomats from more than 60 countries.

Six memorial candles were lit in honour of the six million Jews who perished during the Holocaust.

The keynote address was delivered by Prime Minister Justin Trudeau, who said it was our solemn duty “as leaders and as human beings to stand united – with one voice – and say that anti-Semitic hatred has no place in Canada or anywhere else.”

Last November 7, Trudeau stood in the House of Commons to deliver an apology for the Canadian government’s 1939 decision to turn away the M.S. St. Louis, a ship carrying 907 Jewish refugees fleeing Nazi Germany. The prime minister said the apology was “long overdue.”

Trudeau also spoke briefly about the steps the federal government has taken to combat hate and anti-Semitism, which included increasing funding for security for places of worship and stepping up investigations into hate groups.

“Offering thoughts and prayers won’t be enough. We have to loudly declare that hatred will not be tolerated in our communities, in our places of worship, or on our campuses,” he said.

Conservative MP Peter Kent, representing Opposition Leader Andrew Scheer, pointed to the “alarming resurgence” of anti-Semitism in recent years as evidence of the importance of continuing to address Holocaust remembrance.

One of the greatest new challenges in the 21st century is combating the spread of online hate speech, according to Kent, as it “quickly turns into real life violence and terror that knows no geographic boundaries.”

NDP Leader Jagmeet Singh said that when remembering the Holocaust, we often forget the “stories of resilience and struggle. Every act of celebrating Jewish faith is an accent of resistance, and pays homage to those who survived the Holocaust,” he said.

Barkan also spoke of the “courageous” resistance efforts of Jews during the Warsaw Ghetto Uprising, in which Jews resisted the Nazis’ final effort to transport the remaining ghetto population to concentration camps.

Joe Gottdenker, a CSYV board member and Holocaust survivor, warned that something “like the Holocaust can happen again,” and said because survivors like himself will soon be gone, the best way to remember is to listen to survivors’ stories “while you still can.”

Greenbaum said while Canada and the United States have come a long way in welcoming Jews, “ignorance, if not countered with education, can and will lead to the growth of anti-Semitism.”

Goldenberg warned that when there are no longer Holocaust survivors to share their personal stories and educate future generations, “it will be much easier for Holocaust deniers to say these events never took place.”