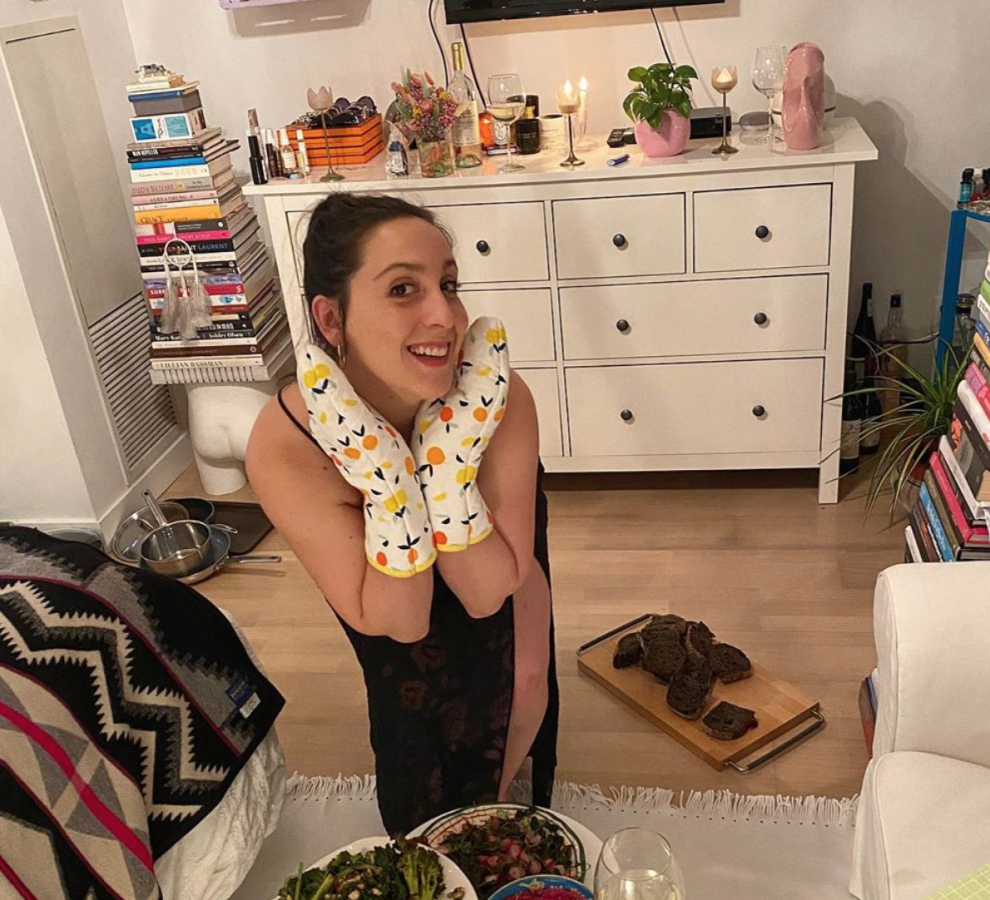 (JTA) – Randi Bergman isn’t sure of her Passover plans yet, but there’s a good chance she’ll be spending the holiday alone.

Bergman, a 34-year-old freelance fashion writer, lives alone in what she calls a junior one-bedroom apartment in downtown Toronto. The setup – desk, bed, couch, TV, kitchenette but no dining table – fits her usual busy lifestyle, which doesn’t involve a ton of cooking and eating meals on her couch or at her desk.

But it’s not ideal for conducting a Passover seder, the festive meal that is rich with symbolic rituals and involves much more than a normal plate of food.

“Just the thought of me having a miniature seder tray really depresses me,” she said.

Yet that’s exactly what Bergman is likely to do when Passover begins on the night of April 8. The Passover seder is one of the most observed Jewish rites, but the coronavirus pandemic is testing that commitment, especially for younger and less religiously observant Jews like Bergman.

Unable to head home or get together with friends for the holiday, they will have to go it alone – or forgo the central celebration of the first major Jewish holiday of the coronavirus era.

Alyssa Feller, a 29-year-old aspiring comedy writer and executive assistant at an animation company in Los Angeles, is paring her celebration this year. She’s part of a networking group for executive assistants in the entertainment industry, and three years ago she helped form a Jewish subset. The members have celebrated Jewish holidays together in the form of big dinners that usually end with a game of Cards Against Humanity or some other form of secular fun.

Raised in a “Reform slash nonreligious” home in Florida, Feller said holidays were more about coming together as a family than religious observance. She’ll keep to the spirit of the holiday on her own, and probably phone her parents at some point during the meal, but she’s bummed out that social distancing means she won’t get to continue the fun tradition she has started with her Jewish friends and colleagues.

At its peak, the group brought together more than 30 guests for the seder.

“I’ll probably do the same thing I do every day of the week, which is wake up, eat breakfast, sign into my computer, work online and make dinner at the end of it,” Feller said. “I’ve already planned it out: I’m going to make some matzah ball soup … maybe make some of my own charoset, with matzah, maybe get a jar of gefilte fish, maybe get one of those rotisserie chickens, and just do that. Maybe if I feel super nostalgic, I’ll go on a Jewish kids learning website and print out a paper seder plate.”

Recognizing that many people face the same predicament, an entire cottage industry has emerged over the past few weeks. Jewish institutions across the denominational spectrum are pumping out online guides, webinars and other resources to help make solo seder-making feel more doable.

Rabbi Louis Polisson co-authored one of those resources, an eight-page guide titled “A Different Pesach: Ideas for the Solo Seder” that advocates for keeping things simple. Rabbi Polisson, who leads Congregation Or Atid in Wayland, Massachusetts, said he realizes how difficult leading a seder on one’s own will be.

In order to preserve the spirit of the seder – the ritual is built on questioning, storytelling and reflecting on the resilience of the Jewish people – he said feel free to incorporate other forms of spiritual practice, like meditation or yoga. Think about what the seder foods mean a little before and while eating them. Lean into the musical aspect of the meal.

“Even if you’re not a good singer, sing to yourself, or to your neighbours, or to your family or friends over the phone or video call,” he said.

But including the seder plate, with its many symbolic elements, is essential for Jonathan Katz, a Reconstructionist 28-year-old urban planning graduate student and researcher at the University of Maryland. He’s keeping the number of participants in his Zoom call low, only including his mother, his cousin and his partner, so that everyone can hear each other clearly.

“We’re experimenting with seder plate ideas – might be people have different parts, or one person has a set-up plate,” he said.

David Kraemer, a professor and librarian at the Jewish Theological Seminary in New York, points out that the Zoom context – he’s started to deal with it as a teacher – doesn’t capture the warmth of a room full of people. He said the circumstances this year will likely make Jews appreciate the normal tradition, which for many involves coming together with family, that much more.

But he also pointed out that Jews have had to deal with much more precarious situations in the past – from the Middle Ages, which saw the ravage of plagues on a much more frequent basis, to the time before the Spanish Inquisition, when Jews were forced to hide their faith by arduously cooking bread (so as not to raise suspicion) a specific way to render it kosher for Passover.

“If Jewish tradition weren’t vigorous and creative in times of challenge, we would’ve disappeared a long time ago,” Kraemer said. “We’ve been here before, we’re here now and we could do an important job, a really reasonable job, of celebrating this and engaging its rituals whatever our limitations might be.”

Bergman is still deciding what her Passover will look like. Like most, she has been following the COVID-19 news, perhaps a little too closely. (“Most people have broken at some point, or are going to break … I haven’t yet but I will,” she said.) She isn’t sure whether she should travel to her parents’ house in the northern part of the city – until recent years her parents would host 30 family members or more for the holiday meal – but she is sure that her mother will continue to play a key role in organizing her seder.

Shopping for kosher for Passover food, difficult in Toronto in a normal year, is now even a tougher undertaking, so Bergman’s mom is ordering catered kosher food. The company will wrap the food into individual servings for Bergman and her two siblings in case the family members decide to eat at their own homes and communicate with each other over a Zoom call.

“I was just assuming that if my mom drops off the food, she’s going to drop off a Haggadah for me,” Bergman said.

And while Feller, too, is still refining her plan, there’s one personal tradition that she’ll make sure to sustain – one that falls squarely within social distancing guidelines. As she does every Passover, she will make time to watch “The Prince of Egypt,” the animated DreamWorks film about the Exodus from Egypt.

“I think I’m the only person who likes that movie,” she said, “so I watch it myself.”

Photo: Randi Bergman says her Toronto apartment is not an ideal setting for a seder. (Courtesy of Bergman)