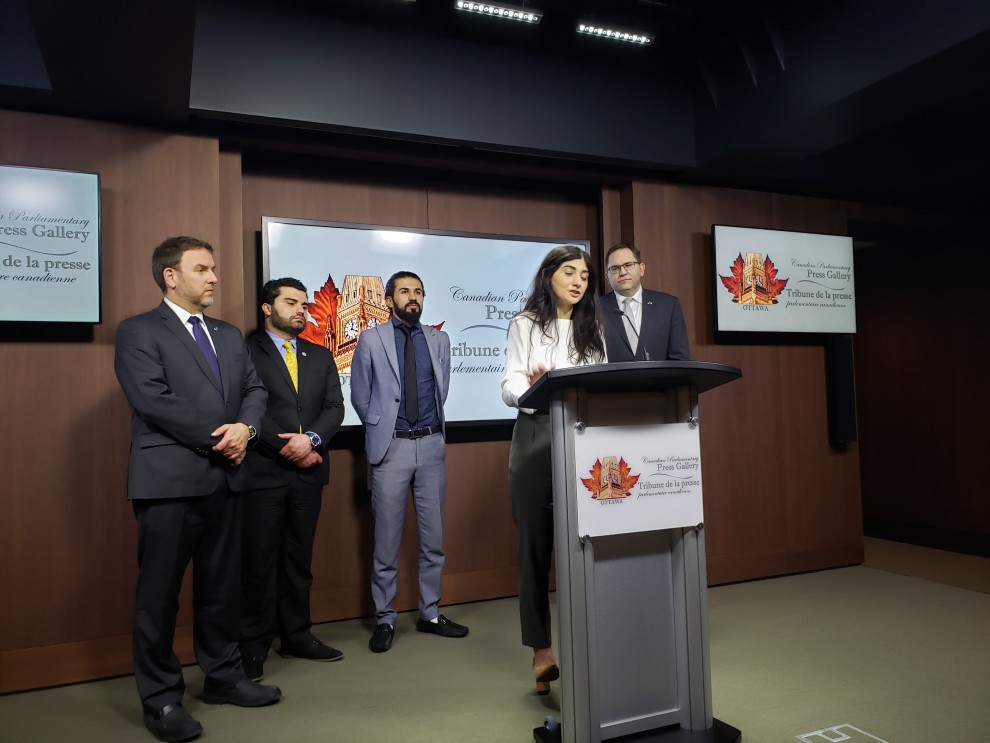 Jews have a responsibility to make sure groups “in danger of being eradicated” are able to find a home in Canada, said Martin Sampson, vice-president of communications and marketing of the Centre for Israel and Jewish Affairs (CIJA).

CIJA was part of a coalition of organizations that held a press conference, April 10 in the Press Gallery Theatre on Parliament Hill, to launch an awareness campaign for Genocide Remembrance, Condemnation, and Prevention Month. Other participating organizations were the Armenian National Committee of Canada, Project Abraham, Romanipe, the Rwandan Humura Association, the Ukrainian Canadian Congress, and the Yezidi Human Rights Organization.

In 2015, the House of Commons unanimously passed M-587, which designated April as Genocide Remembrance, Condemnation and Prevention Month.

The coalition called on the federal government to act on three fronts: 1) to create a national strategy to combat online hate; 2) to expedite and enhance the refugee process for at-risk groups (including Yezidis in Iraq, LGBTQ persons in Chechnya and Iran, and Rohingyas in Myanmar); and 3) to formally recognize the genocide of the Romani people.

“These are matters of life and death,” said Dafina Savic, founder of Romanipe.

“Genocide begins with words and is unfortunately not limited to the past. People are being persecuted and killed in countries around the world simply because of who they are,” she said.

“As people who have experienced – and continue to experience – the impact of these crimes, we ask the government of Canada to create policy solutions to tackle this problem before more people are radicalized online,” added Savic.

Araz Essw of the Yezidi Human Rights Organization said that for the Yezidis, “the nightmare is still happening, even for those of us who managed to escape death and slavery.”

Essw said while his immediate family was “fortunate enough” to come to Canada, he lost 10 members of his extended family to the Islamic State’s genocide against the Yezidis.

“Yezidi survivors grieve from loss, from separation from surviving loved ones, and the horrific memories of what took place,” he said.

According to Essw, there were once 23 million Yezidis in the world, but after 74 genocides there are now less than one million “scattered around the world.”

“Families have been ripped apart by death and distance, and we can’t get back what we lost: our homes, our possessions, our culture, and the precious lives of those who perished,” Essw said.

“We should work together to fight for equal rights for all, so we can live on this earth as one happy family, with dignity and respect for human beings,” he said.

According to CIJA’s Sampson, the three policy asks are a way to not only commemorate and remember acts of genocide, but also “to say ‘what lessons did we draw from history, and how can we apply them to today?’”

Sampson said this is especially important this year, as the Federal government finally apologized this past November for Canada closing its doors to the Jewish refugees fleeing Nazi Germany on board the MS St. Louis in 1939, and in view of how recent mass murders at a synagogue in Pittsburgh and at mosques in Christchurch, New Zealand showed how “online hate can translate into offline violence.”