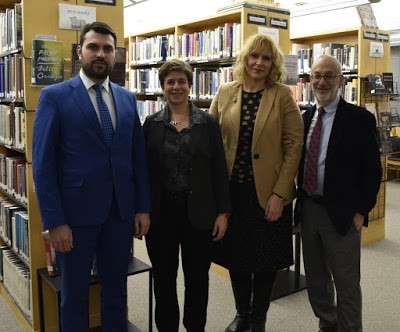 Bulgarian Deputy Minister of Foreign Affairs and National Coordinator on Combatting Antisemitism Georg Georgiev and Bulgarian Ambassador to Canada Svetlana Stoycheva-Etropolski visited the Soloway Jewish Community Centre, January 27, for a special meeting with Jewish Federation of Ottawa officials to discuss Bulgaria’s unique actions to protect its Jewish population during the Second World War, and its latest efforts on fighting antisemitism.

Federation President and CEO Andrea Freedman and Community Relations Chair Victor Rabinovitch welcomed Georgiev and Stoycheva-Etropolski and answered their detailed questions on measures taken in Canada against antisemitism and on Holocaust education.

Georgiev outlined recent initiatives to educate Bulgarians about the role played by members of the public, some politicians and the Orthodox Church in 1943 to block the deportation of Jews to the Nazi death camps. He stressed that while Bulgaria managed to protect its 48,000 Jewish citizens, it gave in to German demands to deport over 11,000 non-Bulgarian Jews living in the country. Bulgaria recently acknowledged its role in these deaths and has apologized formally.

Bulgaria today endorses the International Holocaust Remembrance Alliance’s definition of antisemitism and has developed its school curriculum on Holocaust education, relating this to the wider challenge of historical literacy on antisemitism, actions during the Second World War and the later Communist regime, Georgiev explained.

“We point to the specific hatred of antisemitism, and we use education as well as tougher criminal laws to fight against it,” he said.

As well, he said, Bulgarian authorities cooperate with Jerusalem’s Yad Vashem Holocaust Museum to train schoolteachers and have created a coordination group within the central government linking government departments, representatives of the Jewish Community and municipal authorities, to respond to antisemitic incidents.

Freedman outlined efforts on Holocaust by education undertaken by Jewish communities across Canada and explained that other episodes of mistreatment of Canadian minorities, notably the treatment of Indigenous women and children, are central to the national human rights agenda.

Freedman explained that Federation, together with the Centre for Israel and Jewish Affairs, naturally places its priority on combatting antisemitism, such as in schools and on university campuses. One key element is to maintain close relations with political, educational and police authorities to ensure that hate incidents are recognized for what they are, and are confronted.