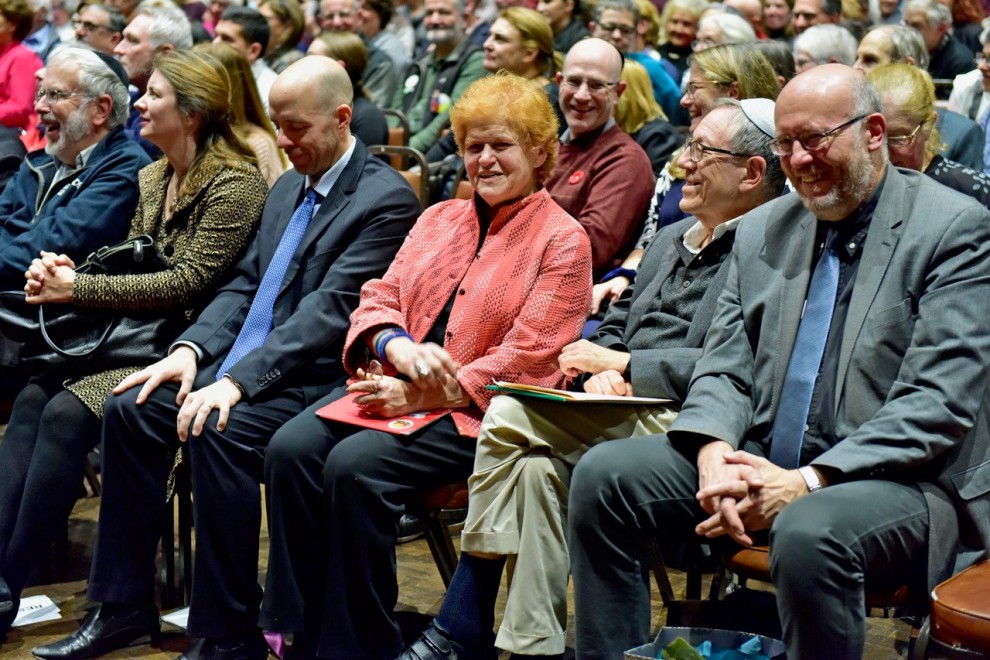 Antisemitism: ‘The time for silence is finished’

Deborah Lipstadt, a world-renowned professor of modern Jewish history and Holocaust studies at Emory University, was keynote speaker at the launch of Holocaust Education Month in Ottawa. Louise Rachlis reports.

“There’s not much we can do to get rid of antisemitism,” said Professor Deborah Lipstadt. “But we can become the unwelcome guest at the dinner.”

“We can’t be quiet,” she told an enthusiastic full house at Kehillat Beth Israel on November 10.

Lipstadt’s talk was the keynote address at the launch of Holocaust Education Month in Ottawa, held on the 81st anniversary of Kristallnacht (Night of Broken Glass), the antisemitic pogrom in Nazi Germany and Austria that was the prelude to the Holocaust.

The event was organized by the Centre for Holocaust Education and Scholarship at the Zelikovitz Centre for Jewish Studies at Carleton University.

Lipstadt famously won the libel suit brought against her by Holocaust denier David Irving in the British courts, described in her book History on Trial. Her most recent book is Antisemitism: Here and Now.

“Antisemitism is part of a grouping of forms of hatred, but it’s different in that it’s a conspiracy theory, with that element of fear,” said Lipstadt. “The template of antisemitism is the way the story of the Crucifixion was used in the Middle Ages,” that the Jews wanted Jesus to be killed because he wanted the moneychangers out, and the Jews asked the Romans to kill him.

As Lipstadt explained, that conspiracy theory went beyond the Church: Voltaire, Karl Marx, and the eugenics movement, “they all sound the same.”

“The antisemite looks on Jews to be feared in a malicious and devious way,” she said. “The Jew becomes the devil or the demon… the only one who can harm God, and he comes in disguise so you don’t know you’ve encountered him until they’ve done their damage.”

She described a Nazi propaganda film that promoted Jews dressed in regular clothing as more dangerous than those with side-locks and traditional garb.

“We all recognize the kind of antisemite who shoots up synagogues,” she said. “Those people are dangerous, but for the dangerous things they do, they are easier to spot and fight… The dinner party antisemite sits at dinner and says he hired an associate – ‘he’s Jewish - but he’s very honest.’”

Then there’s the “stirring up the pot” enabler kind of antisemite on the left and on the right, like Jeremy Corbyn and Donald Trump, she explained.

“Nice people don’t attend rallies in Charlottesville and chant ‘Jews will not replace us.’”

For many of the people on the progressive left, their view of prejudice is “refracted through a prism of ethnicity, class and power.” Jews are white, privileged and, ipso facto, have power, she said. “They look upon the Jew as someone who could not be a victim of prejudice.”

And the far right “is something else.” They believe “there is a plan afoot for a genocide of white Christians” and these black and brown people, “they’re not smart enough to be doing this on their own, so the Jews are helping them… George Soros has become the Rothschild of the 21st century. That’s what they meant in Charlottesville when they chanted ‘Jews will not replace us.’”

Lipstadt added that a fight over whether antisemitism is worse on the left or the right is useless.

“They both are dangerous in different ways: on the left, structurally; on the right, dangerous in terms of its violence and conspiracy theories.”

Criticism of Israeli government policies is not antisemitic, she said. “It becomes antisemitic when you have this myopic view of Israel being the only one doing a bad thing in the Middle East… You have to ask, what’s going on? Why this myopia? That’s what disturbs me. When you call for the destruction of Israel, that’s antisemitism.”

Holocaust denial, Lipstadt said, is a form of antisemitism.

But the fight against antisemitism shouldn’t become our sole identity, she cautioned. “Then we turn Jews into an object, what’s done to Jews, instead of what Jews do.”

After a standing ovation, Lipstadt was thanked by former justice minister Irwin Cotler, chair of the Raoul Wallenberg Centre for Human Rights, who praised her for stressing “the compelling importance of each and all of us of standing up and being counted. This must be the overriding message we take away. We cannot let antisemitism become the linchpin of our identity and who we are.”

The HEM launch event also included the presentation of the 2019 Arie Van Mansum Award for Excellence in Holocaust Education. Created in memory of Arie Van Mansum, who was recognized by Yad Vashem as Righteous Among the Nations, the award was presented to Professor Jan Grabowski of the University of Ottawa by Global News journalist Abigail Bimman.

“The legacy of courage and sacrifice of the righteous must be preserved,” said Grabowski. “The history of the Holocaust finds itself under direct attack, including more recent forms of Holocaust distortion.”