A much-needed month of respite

Over the past 35 years, IVOW has helped more than 2,000 Israeli youth from families affected by war and terrorism enjoy a summer in Canada. Bulletin reporter Matthew Horwood joined them on their day in Ottawa.

More than 100 bar and bat mitzvah aged Israeli youth visited Ottawa, August 14, near the end of their month-long stay in Canada.

The Montreal based Israeli Victims of War (IVOW) association brings a group of kids from Israeli families affected by war and terrorism to Canada each summer where they spend three weeks at a Jewish summer camp in the Laurentians and a final week visiting Montreal, Ottawa and Toronto to participate in “exciting and meaningful activities” before returning to Israel.

IVOW’s day in Ottawa began with a visit to Parliament Hill which included witnessing the Changing of the Guard ceremony, before heading to the Israeli Embassy to meet Ambassador Nimrod Barkan and learn about modern-day diplomacy using Israeli Nobel Laureate Robert Aumann’s game theory.

After a picnic lunch, the group toured the Canada Aviation and Space Museum, where they learned about various aircraft, from First World War biplanes to jetfighters from the modern era.

Finally, the group ended the day at the Soloway Jewish Community Centre where they swam in the outdoor pool, played basketball in the gym and enjoyed a pizza dinner catered by Babi’s Restaurant.

IVOW was founded after the 1973 Yom Kippur War and, to date, has benefitted over 2,000 children.

Abie Moses, an Israeli IVOW representative, told the Ottawa Jewish Bulletin that many of the children speak about wanting to return to Canada with IVOW next year. 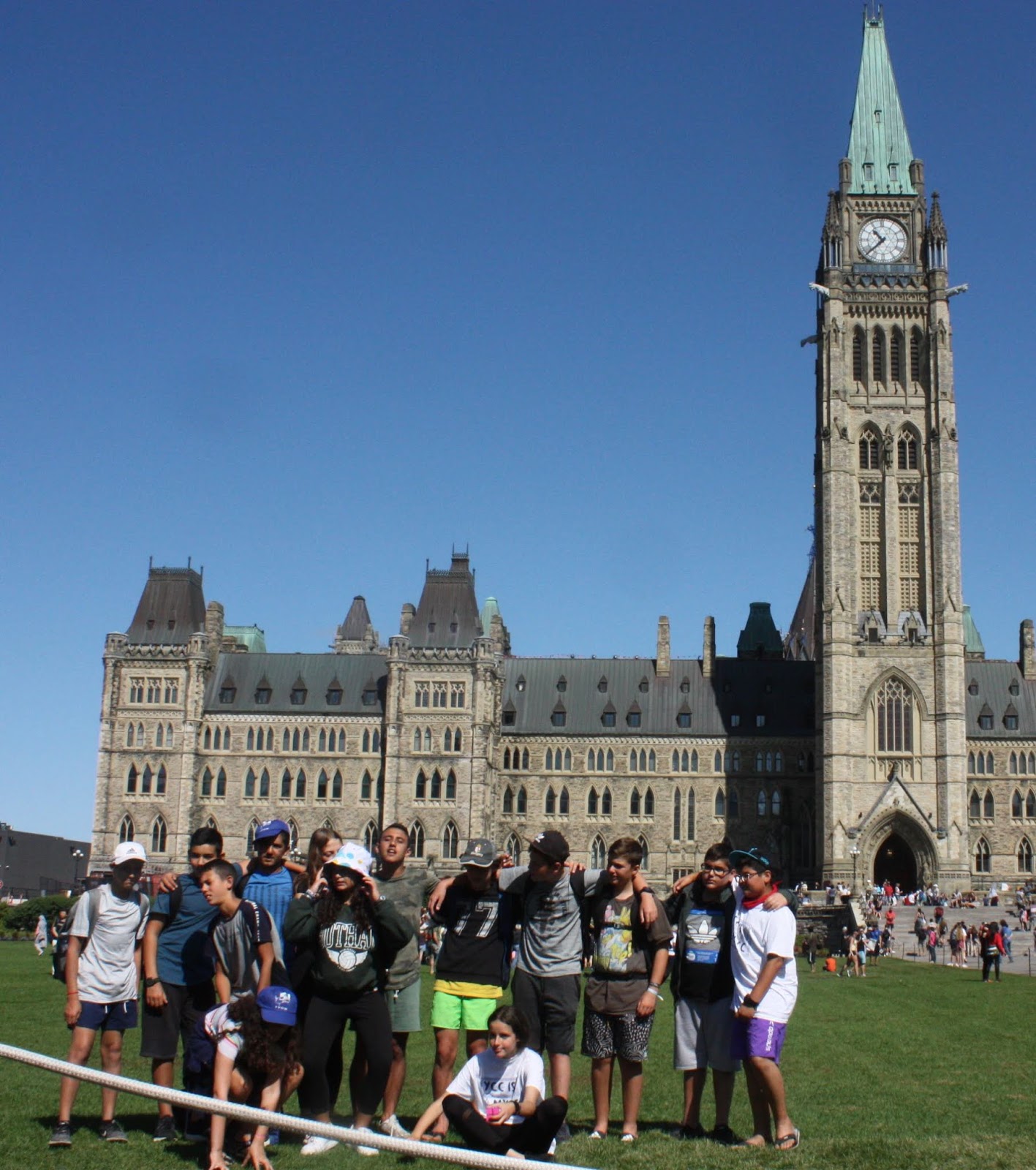 Some of the Israeli youth on the IVOW trip pose for a photo on Parliament Hill, August 14. (Matthew Horwood)

“Last night, I jokingly said the kids’ stay in Canada would be extended by two weeks, and they all cheered,” Moses said. “Only one child said he needed to get back home, because he needed to go to school.”

Moses was himself a victim of terrorism in 1987, when a Palestinian terrorist threw a Molotov cocktail through the windshield of his family’s vehicle while they were travelling through the West Bank. Moses was able to pull his three children from the burning vehicle, but was unable to reach his pregnant wife in time, and his youngest son died in hospital three months later from his injuries.

Moses – who has burn scars on his arms from the attack – joined the Organization of Victims of Terror in 1989, and became chair of the organization in 2016. IVOW uses the organization’s database of terrorism and war victims to connect with the children in order to bring them to Canada.

Ovi Ben Haim, a board member of Beit Halochem Israel–Aid to Disabled Veterans of Israel, an organization which helps Israel’s 51,000 disabled veterans, is another Israeli representative of IVOW. All three of his children have been to Canada with IVOW.

Ben Haim became involved with Beit Halochem and IVOW after he was injured by a sniper’s bullet while serving in the Israel Defense Forces.

“The bullet crossed my head from side to side, and I became paralyzed in two legs and one hand and was made temporarily blind. It took me more than a year to recover,” Ben Haim said.

Ben Haim said when he first visited Canada with IVOW five years ago, he was “amazed” by how accommodating Canadians were of the group.

“When I see what the Canadians are doing here, it makes me respect and salute them. The people give us so much love and care – without even living in Israel – and they have been doing that for over 35 years,” he said.

Tzippy Buchris, another of IVOW’s Israeli representatives, was a survivor of the 1974 Ma’alot massacre, a Palestinian terror attack that resulted in the deaths of 31 Israelis. She was the subject of an iconic photograph taken after the massacre, which depicts her being carried to safety by her brother, Galil Maimon.

Buchris said IVOW allows the children to experience another life that does not involve “bombs and soldiers” and reassures them “the future will be OK.”

While two of Buchris’ sons were IVOW madrichim this year, she said all of IVOW feels like her family.

“This group has given me a new life that I can’t get in Israel. I very much love this group,” she said. 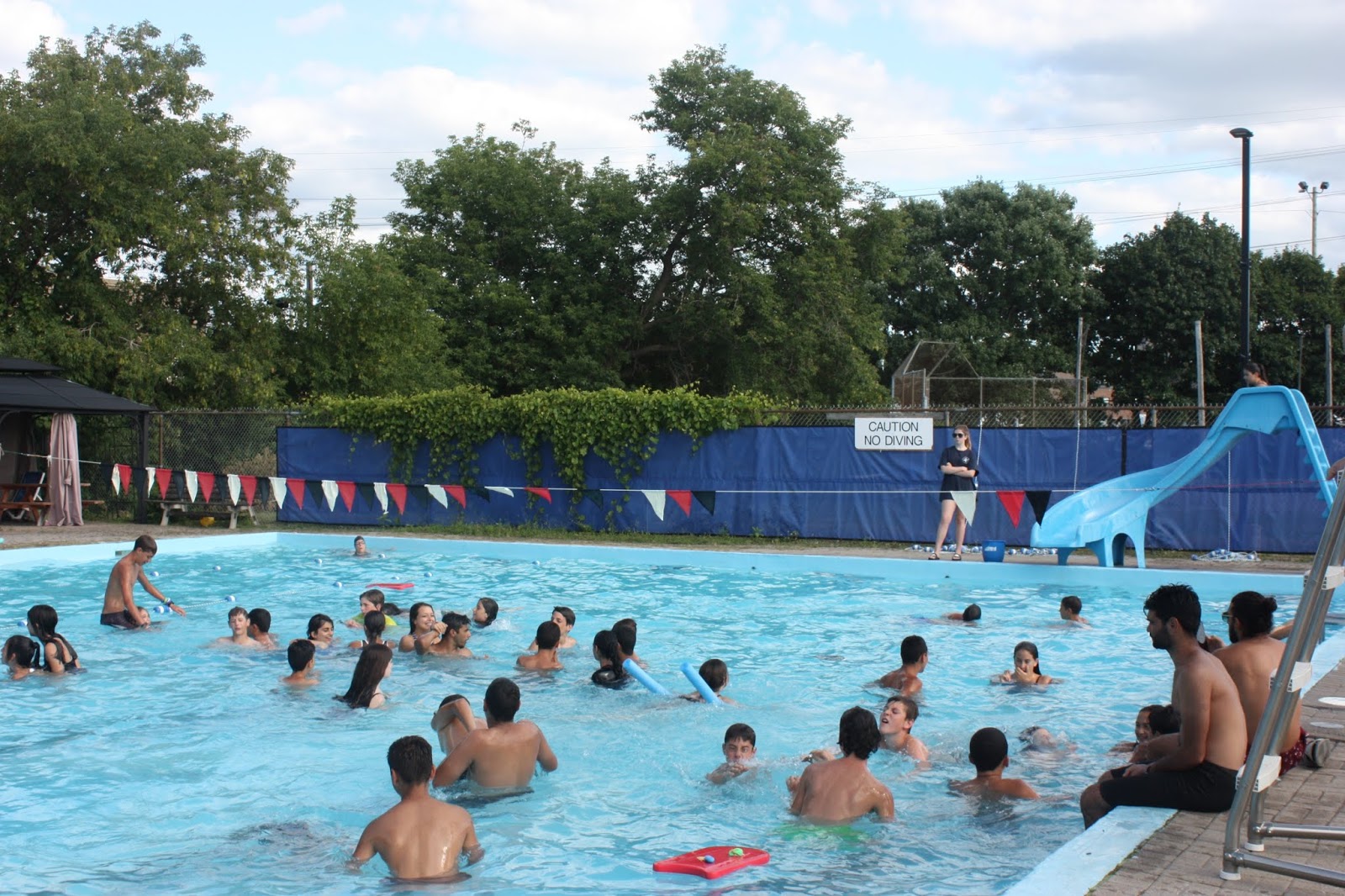 Young Israelis from families affected by war and terrorism enjoy a swim in the Soloway Jewish Community Centre outdoor pool during the final stop of their visit to Ottawa, August 14. (Matthew Horwood)

Amitai Marcus, one of the IVOW kids, said his father was injured in the 1982 Lebanon War.

“He only had one leg, so growing up I couldn’t do activities with him like running around or learning to ride a bike,” Marcus said.

While at camp, Marcus learned how to sail and make bracelets, and played sports like football, tennis and soccer. Marcus said most summer camps in Israel are day camps, so to be able to attend a sleepaway summer camp in Canada was a “different and unique experience in a beautiful place.”

“The experience was one of the best things I have ever done, and I think IVOW is doing a great thing,” he said.