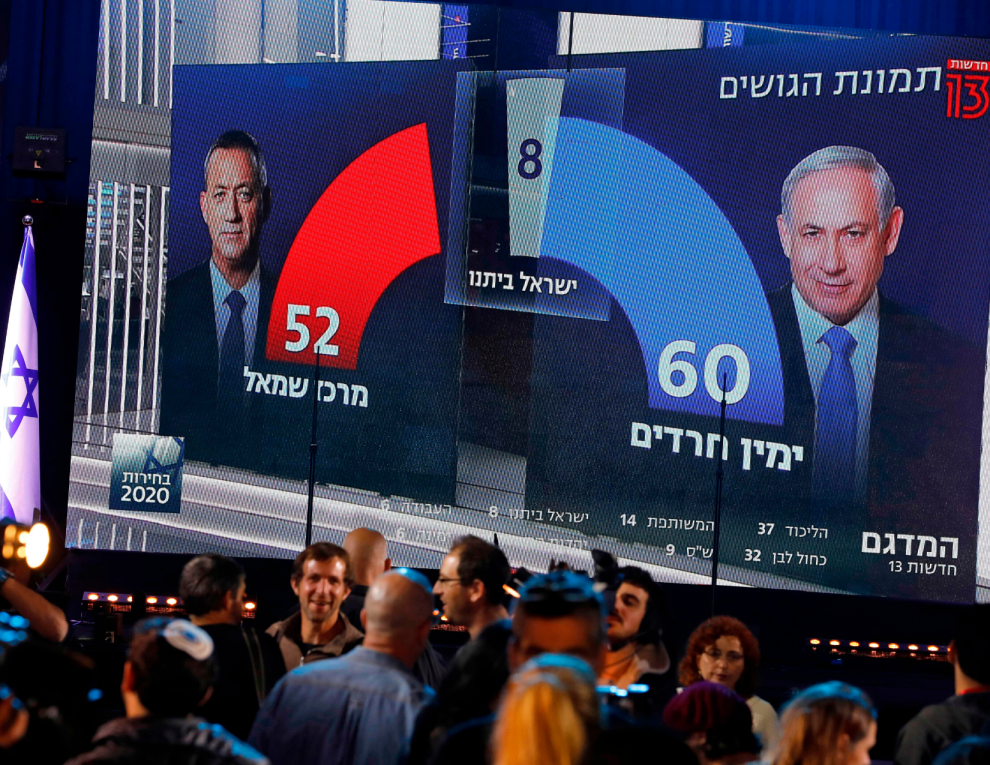 (JTA) – Israel finally has a government.

On Monday, Prime Minister Benjamin Netanyahu and chief rival Benny Gantz signed an agreement to form a coalition government together. The deal ends more than a year of deadlocked elections and political stalemate.

Since March 2019, Israelis have gone to the polls three times and, on each occasion, essentially delivered a tie between Netanyahu and Gantz. Neither of the first two elections resulted in a governing coalition and ended up triggering yet another vote.

With no end in sight to the politicking following the latest election, in early March, and the COVID-19 crisis weighing on the country’s citizens, Gantz made the shocking move to join Netanyahu – someone he has called unfit for office due to corruption allegations – and break apart his own centrist political group, Blue and White.

Their deal is multifaceted and involves an agreement that Gantz would become prime minister in 18 months – but Netanyahu got his competitor to accede to many political demands. Here are five main takeaways from the new government.

The Israeli government is back in business – and wants to tackle the coronavirus.

Gantz ran his entire campaign, for more than a year, on the need to unseat Netanyahu. He’s reneging on that promise, he says, so that Israel can overcome a more urgent challenge – the COVID-19 pandemic.

Coordinated action on the pandemic has been forestalled until now because Netanyahu, as caretaker prime minister, did not command a majority in Israel’s parliament, the Knesset. That rendered the government unable to pass and enforce major legislation.

According to Monday’s deal, the new government was formed to solve that problem. It will dedicate its first six months to passing legislation related to COVID-19. Any other legislation would require the approval of both Netanyahu and Gantz to advance.

“We left our comfort zone to work from the inside,” Gantz said in a speech Tuesday. “We would rather beat the coronavirus than win on social media.”

Gantz’s move has split his supporters. Some, including his former second-in-command, are calling him a cheat. But other voices in Israel and abroad say he demonstrated leadership in the face of crisis.

Netanyahu is still prime minister, at least until next year.

On paper, the deal looks like a win for Netanyahu. For more than a year, Gantz came extremely close to unseating the long-time leader through maneuvers and deals with various parties to form a coalition.

Now Netanyahu gets to keep the job he’s held for more than a decade.

That’s especially significant because Netanyahu is under indictment for fraud, bribery and breach of trust, with his trial set to begin in May. He’s the first sitting prime minister to be indicted.

The coalition agreement says Gantz will take over in 18 months, and mandates that the Knesset pass legislation to that effect. To prevent Netanyahu from breaking up the coalition and calling new elections prior to that time frame, the legislation will state that if new elections are called, Gantz automatically becomes prime minister in the interim.

In the meantime, Gantz will be defense minister and deputy prime minister. His allies will head the Foreign Ministry and Justice Ministry, while Netanyahu’s Likud party choices will get the Finance Ministry and the speakership of the Knesset.

There’s a small Gantz win in there: Netanyahu had sought the Justice Ministry because he’s under indictment, and it would have given him a measure of influence over the judicial system.

The agreement also makes it difficult for Netanyahu to avoid handing over power to Gantz, one way or another. But 18 months is a long time in Israeli politics and Netanyahu is still in the top job. He’s also a historically savvy political operator who has weathered all kinds of challenges to remain in power, so this is no guarantee for Gantz.

In the meantime, Gantz’s former coalition is in tatters. He once commanded the largest bloc of lawmakers in the Knesset, but that party is now split and the subgroups are at odds with each other. His former No. 2, Yair Lapid, called the coalition agreement a “deceit” and said “I apologize to everyone who I convinced over the past year to vote for Benny Gantz.”

But Netanyahu is still going on trial.

One thing that hasn’t changed is Netanyahu’s trial date: May 24. In the past, the prime minister has sought legislation that would give him immunity while in office. That does not appear to be on the table now.

But Netanyahu did improve his position a bit in the coalition deal. He gets veto power over the appointment of the next attorney general and state prosecutor, and can choose half the committee to appoint judges.

And if the Supreme Court disqualifies Netanyahu from remaining prime minister due to his indictment, the agreement automatically triggers new elections.

Israel is now preparing to annex parts of the West Bank.

Another significant result of the agreement: Israel will now likely annex parts of the West Bank, beginning as soon as this summer.

One of Netanyahu’s key campaign promises was to extend Israeli sovereignty to portions of the territory, which most of the international community views as illegally occupied. Last year, Netanyahu promised to annex the Jordan Valley, a wide swath of territory on the eastern edge of the West Bank, and the peace plan released by the Trump administration in January greenlights Israeli annexation.

Palestinian leaders uniformly oppose any Israeli annexation of the West Bank, which Palestinians view as the territory of their future state.

But the coalition agreement allows Netanyahu to put annexation of portions of the West Bank up to a vote beginning July 1, provided the United States still supports the move. If Netanyahu can get a majority, annexation would likely move forward.

The biggest thing to remember, amid all of this political wrangling, is that this entire situation is unprecedented. Israel has never held three consecutive rounds of elections. It has never had a sitting prime minister about to stand trial for corruption. It has never faced a pandemic like this.

There have been unity governments before, where the two largest parties form a coalition, and they’ve yielded mixed results. The most famous example occurred from 1984 to 1988, when the Labor and Likud parties successfully shared power and split the prime minister’s office. In 2012, a short-lived unity government under Netanyahu broke apart after a couple months.

Israeli politics is famously tumultuous, and it’s soared to a new level in the past year. So as the new coalition takes shape and begins to govern, prepare to be surprised again. Somehow.

Photo: A TV screen broadcasts the exit poll results of the Israeli election in Tel Aviv, March 2, 2020. After more than a year of political deadlock, Benjamin Netanyahu and Benny Gantz have agreed to form a government together. (Menahem Kahana/AFP via Getty Images)