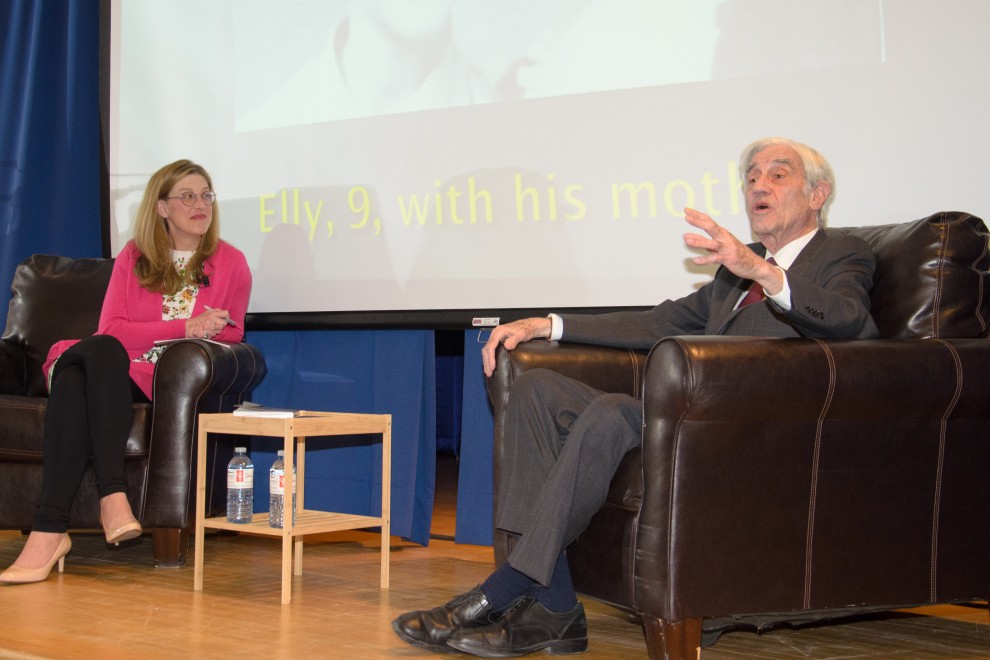 Young people today must “watch for hate” and be vigilant about who they listen to, says Holocaust survivor Elly Gotz.

Gotz, who was born in Lithuania in 1928 and now lives in Toronto, poignantly told his story at the Yom HaShoah commemoration presented by the Shoah Committee of the Jewish Federation of Ottawa, May 1, at the Soloway Jewish Community Centre. He was interviewed by journalist Stephanie Levitz.

Gotz said Lithuania used to have a “rich Jewish life,” but when the Nazis invaded in 1941, the local population immediately orchestrated an attack on the Jewish community.

“The Lithuanians took rifles, put on white arm bands and went hunting for Jews. They robbed and then killed them. They formed concentration camps and killed over 6,000 Jews in the first six weeks of the war, even before the Nazis had taken over Lithuania,” Gotz said.

When the Russian Army was marching towards Germany, the ghetto was liquidated and Gotz and his father were deported to the Dachau concentration camp, where they performed forced labour in the construction of an aircraft factory.

According to Gotz, the prisoners in the camp had no washing facilities, worked 12-hour shifts and only received “a bowl of watery vegetable soup and one slice of bread” to eat per day.

“One morning I shook my friend to wake him and found he had died. I looked in his pocket to see if he had left a piece of bread, but he had eaten it. I carried him out. He weighed nothing,” Gotz said.

Asked by Levitz to describe his moment of liberation from the concentration camp, Gotz said he had been bringing food to his bed-ridden father.

“I looked out the window and saw an American jeep. I said, ‘Father, we made it.’ And he said, ‘That’s wonderful. Have you got the bread?’ That was my moment of liberation,” Gotz said.

After liberation, Gotz and his family spent six months recovering in hospital. Gotz said when he was released from the hospital he was OK physically, but was “full of hate” and wanted to “go kill Germans.”

“I experienced that hate so clearly I wasn’t thinking of anything else, of my own life, or what would happen when I killed civilians,” he said.

Gotz said he has still not forgiven the Germans who did terrible things during the Holocaust, as “forgiveness has to be earned according to Jewish law,” but now he does not hate. “I said to myself, ‘You can’t accuse a whole nation of being murderers, because they are not.’”

After the war, Gotz stayed in Germany for two years, as “no country wanted us,” but he eventually moved to Norway for a brief time before living in Africa from 1947 until 1964, when he came to Canada.

“We are living in a very difficult time,” Gotz said when asked by Levitz about the current political climate. “Anti-Semitism is raising its head once again, but the scariest thing is young people are learning to hate. That is why I speak to over 100 schools and universities every year.

“I tell them, be careful who you follow and believe. Listen to others, not to one person who speaks hate. It’s very important to talk to young people today to make sure they understand where the world is going,” Gotz said.

Six memorial candles – each representing one million Jews murdered during the Holocaust – were lit on the Zachor menorah by Holocaust survivors Tom Deri, Robert Lantos, Kati Morrison, Bernard Lipski and Tibor Egervari. They were assisted by students Stefanie Ages, Ben Dodek, David Khazzam, Dalia Miller, Neilah Shapiro and Daniella Springer, all recent participants in the March of the Living. 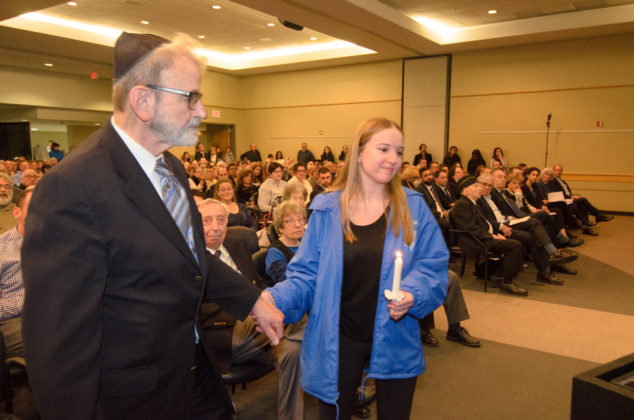 Holocaust survivor Tibor Egervari is assisted by March of the Living participant Daniella Springer during the memorial candle lighting ceremony at the Yom HaShoah commemoration, May 1, at the SJCC. (Howard Sandler)

Following the Yom HaShoah commemoration, a memorial service was held for Lori Gilbert-Kaye, who was murdered during the anti-Semitic hate-crime shooting at Chabad of Poway in California, four days earlier on the final day of Passover.