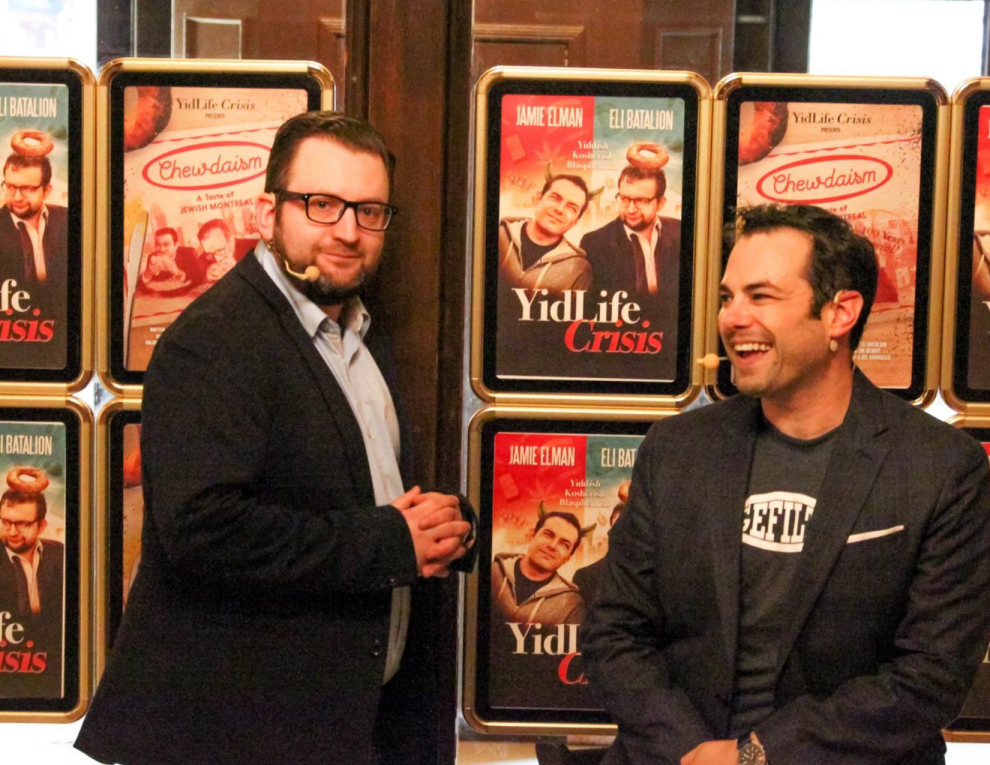 YidLife Crisis, created by and starring Eli Batalion as Leizer and Jamie Elman as Chaimie, began as a web series in 2014 about two Yiddish-speaking friends in Montreal who would meet over food in Mile End, the city’s old Jewish neighbourhood that’s now a multicultural hub famous for its Old World Chasids and New World hipsters.

The best of the early episodes featured Leizer and Chaimie, both in their 30s, walking from the iconic St. Viateur Street bagel bakery to the equally iconic bagel shop a few blocks away on Fairmount Avenue while engaged in Talmudic-like debate over which has the better bagel – an unresolvable argument familiar to almost anyone from Montreal. Along the way, they encounter a pair of Chasidic men, about their age, who appear to be engaged in an actual Talmudic discussion.

YidLife Crisis soon became a viral phenomenon online that swept the Jewish world leading to longer form videos that saw the pair investigating Jewish food and culture in locales from New York to Israel and to a stage show in demand everywhere from synagogues to comedy and Jewish culture festivals – as well as fundraising events for an array of Jewish organizations.

While most of the YidLife Crisis videos have been in Yiddish with English-language subtitles making them accessible to those who don’t speak the mamaloshen, Batalion and Elman perform their stage shows in English.

Now, with the COVID-19 pandemic shutting down live, in-person events for the past seven months and for who-knows-how-many-more months to come, Batalion and Elman are doing shows online for Jewish organizations and coming up soon on their schedule is “Mid-way on the Highway,” a mid-campaign event for the Annual Campaign of the Jewish Federation of Ottawa, on Monday, October 26, 7 pm.

In a recent phone conversation with the Ottawa Jewish Bulletin, Batalion said the show would be  45 minutes long and will include a variety of pieces, including some material tailored specifically to Ottawa’s Jewish community.

“We’ve already done some research on the Ottawa community and have our Ottawa bits lined up,” Batalion said.

Batalion, who is based in Montreal, explained that the first web episodes of YidLife Crisis were essentially done as a summer project to work with Elman, a childhood friend, who has been based in Los Angeles for the past 20 years. At first, YidLife Crisis was a side project for the pair, but it quickly came to dominate both of their professional careers.

“Because our series and our work are so Montreal-centric, Jamie is back here often,” Batalion explained, “which is why the COVID era is a bit of a weird time because it’s a lot harder for him to come back.”

Batalion explained that they are putting the Ottawa show together while he is in Montreal and Elman is in Los Angeles, but “there was a brief period in the summer when he was here, and so we shot a bunch of our stuff together at that time.”

Asked about the irreverent nature of some of the YidLife Crisis material, Batalion said he’s been impressed with the reception they’ve received from the Jewish community.

“Often, religion and comedy don’t mix very well … but I’ve been really impressed with the Jewish community and the ability to have a sort of flexibility towards comedy and also understand that within our comedy is a reverence for the religion and the culture. We’re not superficially making fun of stuff without living it ourselves,” he said.

“Some of the most religious people have been able to play ball with us and that’s really opened my eyes to the community” and its ability to appreciate the humour.

“Mid-way on the Highway” with YidLife Crisis is being presented free of charge online on Monday, October 26, at 7 pm, but it is necessary to register before Friday, October 23 at noon to ensure participation. Visit this link to register for the event.

For a message from Lyon and Cybele Hamburg, event co-chairs of “Mid-way on the Highway” with YidLife Crisis, visit this link.

Photo: Eli Batalion (left) and Jamie Elman, the duo behind YidLife Crisis, are producing a 45-minute online show for the mid-campaign event of the Annual Campaign of the Jewish Federation of Ottawa, on Monday, October 26, 7 pm. (yidlifecrisis.com)