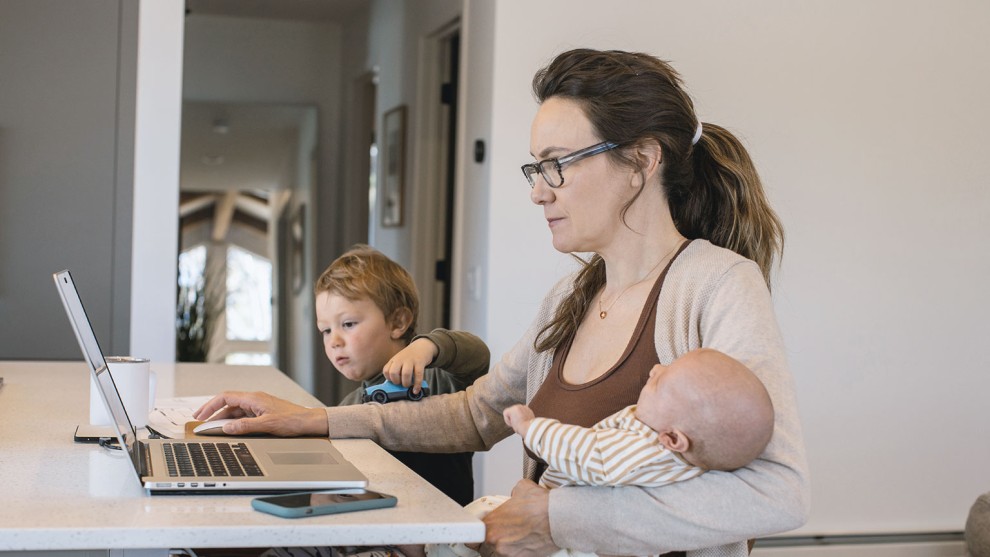 It is not a new conversation: pay gaps along a gender division line in the workforce, or that women traditionally make more sacrifices to move up a career ladder. In fact, Statistics Canada data says that women only make 75 cents to every dollar that men make, and it usually takes 15.5 months to earn what a man might make in 12.

The COVID-19 pandemic has only highlighted gender inequalities. While globally women make up about 49 per cent of the workforce, they account for almost 70 per cent of pandemic-related job cuts, layoffs, or unemployment for other reasons. While the immediate impacts of this are obvious, Betina Kuzmarov, Jewish community member and associate professor in law and legal studies at Carleton University is worried about the long-term implications.

“The initial closure not only was sudden, but it was tough — I was suddenly the sole caregiver for a 2.5-year-old while supposedly trying to do a full-time job,” said Kuzmarov. “That’s an untenable situation.”

Although Kuzmarov’s husband is extremely supportive, he is a front-line worker, so the choice of who stayed home with little Ari wasn’t even a choice. Being in academia, Kuzmarov said she was “lucky” to be able to put some things on hold, and grateful that she was not teaching the first semester of the pandemic.

Jewish Family Services Executive Director Sarah Caspi explained that women who act as caregivers were on “extra duty” over the past year.

“Even in the best situations, the pandemic has added work to women. In some situations, women were able to share the workload with their partners but women still are the primary caregivers and so many women needed to shift their work hours, reduce hours of employment, or leave their positions.”

Now a year in, Ari is a bit older and with daycares reopened there is some sense of normalcy returned to their lives — but Kuzmarov is worried about what comes next.

“I’m worried not about getting through this, but what it’s going to look like for my career down the road,” she said. “I’m supposed to move up [in status] in five to seven years, but I haven’t been as productive as I should have been. No one’s talking about the long-term effects of women in the workforce. Anyone who’s been slowed down due to childcare, elder care … this is two years of my career that I won’t get back.”

Kuzmarov said she’s worried about how her resume will be judged against someone who didn’t have the same responsibilities and thinks that the already-existing barriers in the workforce even more urgently need to be addressed.

“If it was up to me, I’d be thinking about how to lower those barriers, like for women, how do you help with childcare on a regular basis? I’m not an economist, I’m sure there are different ways to do it, but that’s what we need to think about.”

Kuzmarov said it’s time to “think creatively” and while most of the government structures in place to come out of recessions or similar situations focus on industry, recovery from the COVID-19 pandemic might take something different.

Ami Wise, a lawyer who volunteers with the World Jewish Congress, was the one to primarily stay home with his kids during the pandemic.

“My wife is a powerhouse and I have two daughters. I’m even more invested now in this issue,” said Wise, who is also a member of the Jewish Diplomatic Corps and has worked on gender diversity awareness campaigns.

“Gender diversity is a human rights issue. To me it’s ridiculous that there’s not gender diversity and equality in our world today,” said Wise. “There aren’t that many guys associated with this issue, so I’m a bit of a novelty. To move the needle for real, men need to be just as engaged.”

The Government of Canada said they are “taking strong action to prevent the pandemic from rolling back progress or reversing the hard-won gains of women in Canada” in a February funding announcement. The call, entitled “Feminist Response and Recovery Fund,” will provide $100 million for projects helping those in greatest need. The funding will allow recipient organizations to launch new projects or scale up past projects that increase women and girls' participation in Canada’s economic, social, democratic, and political life.

The City of Ottawa has also committed to establishing resilient and equity-based service systems. For more information on economic support and recovery, visit the City of Ottawa resources page here.

“Our Tikvah program ran a women’s group so that they could connect with each other,” during the pandemic said Caspi. “The isolation was huge for many clients. The challenge for single mothers was finding time, as many of the women were already so busy.”

The JFS Care for the Caregiver program also saw an increased number of calls, from worn-out caregivers.

JFS also offers a women’s support program called Shalom Bayit for Jewish women experiencing abuse. Last fall, the program received a boost with $2,000 grant from the Women’s Collective Philanthropy Program of the Ottawa Jewish Community Foundation, to establish a virtual space for vulnerable female clients. For more information about any of these resources, visit https://www.jfsottawa.com/

“We are only starting to see the impact that that pandemic has had on women,” said Caspi. “We know that we need to create better systems to support women all the time, so that that when there is a crisis, there are supports already in place.”