The Nazis based their hatred of Jews, which led to the Holocaust – the genocidal murder of six million European Jews – on a “pseudoscience of inherited differences between Jews and everyone else,” said Eli Rubenstein.

Rubenstein, a Holocaust educator and national director of March of the Living Canada, was speaking at Ottawa’s International Holocaust Remembrance Day commemoration, January 27, at Library and Archives Canada. His keynote lecture was “Nazi Germany’s Global War Against the Jews: Responding to Implacable Hatred without Losing our Humanity.”

Rubenstein said when he read the None Is Too Many, Irving Abella and Harold Troper’s book about Canada’s restrictive immigration policy towards Jews in the 1930s and ’40s, he was “never more ashamed to be a Canadian.”

However, when the Canadian government apologized in November for turning away Jewish refugees, Rubenstein said he had “never been prouder to be a Canadian.”

To illustrate his point about Nazi anti-Semitism, Rubenstein told a story about a German midwife who strangled Jewish newborns to death in a displaced persons camp in the years after the war had officially ended.

“The war is over. Hitler is dead. Germany is in ruins. Sixty million people have lost their lives, and this German midwife is still strangling minutes-old infants. Can you come to grips with that evil?” he asked.

Rubenstein then switched gears and discussed some of the Righteous Among the Nations – non-Jews who risked their lives to save Jews from the Nazis – in order to give the audience a “measure of optimism.”

Examples of these stories included a German man who saved a Jewish woman from being arrested by pretending to be her husband, and a monastery that hid 200 Jewish boys and girls even though women were normally forbidden from entering the building.

“These righteous people deserve to be heard, because we don’t want the next generation to be misanthropes. We want people to understand there’s also goodness in humanity.”

On display publically at the event for the first time was Hitler’s personal copy of Statistik, Presse und Organisationen des Judentums in den Vereinigten Staaten und Kanada (Statistics, Media, and Organizations of Jewry in the United States and Canada), a 1944 report which lists census information for Canadian and U.S. cities, including their Jewish populations. The book offers a glimpse into what might have happened to North American Jewry had the Nazis won the Second World War.

“It’s up to archives and libraries everywhere to educate and to advocate for the most complete historical record possible, no matter how controversial or contentious,” said Librarian and Archivist of Canada Guy Berthiaume as he explained why the document was acquired by Library and Archives Canada.

“We believe that given rising xenophobia, the decline of Holocaust knowledge and the rise of Holocaust denial, it was essential for us to acquire this item and bring it into a public institution where it could contribute to Holocaust memory,” Kent said.

The event was MCed by March of the Living participants Neilah Shapiro and Anne Khazzam and featured music by violinist Ralitsa Tcholakova. Kaddish was led by Rabbi Idan Scher of Congregation Machzikei Hadas. 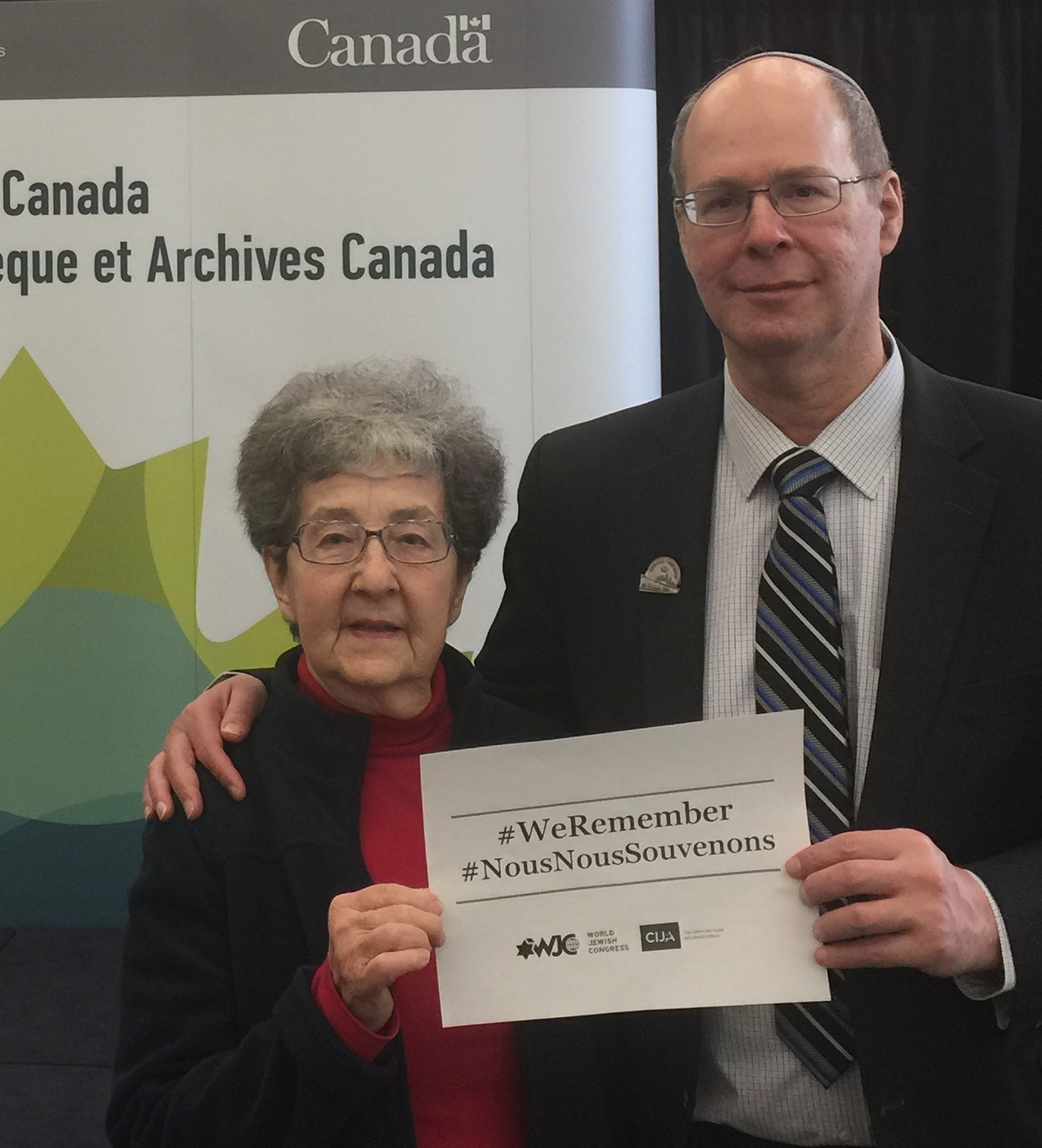 Attendee Lynda Margeson said her “skin crawled” when she saw the display containing the book once owned by Hitler.

“This was unbelievable and I’m still in a state of shock,” she said.

Margeson said she believes it’s important to keep controversial historical documents around, because “if we don’t learn from the past we won’t do any better in the future.”

At the end of the event, audience members held up small signs reading “We Remember” for a group photo posted on the Internet as part of the World Jewish Congress’ International Holocaust Remembrance Day social media campaign.