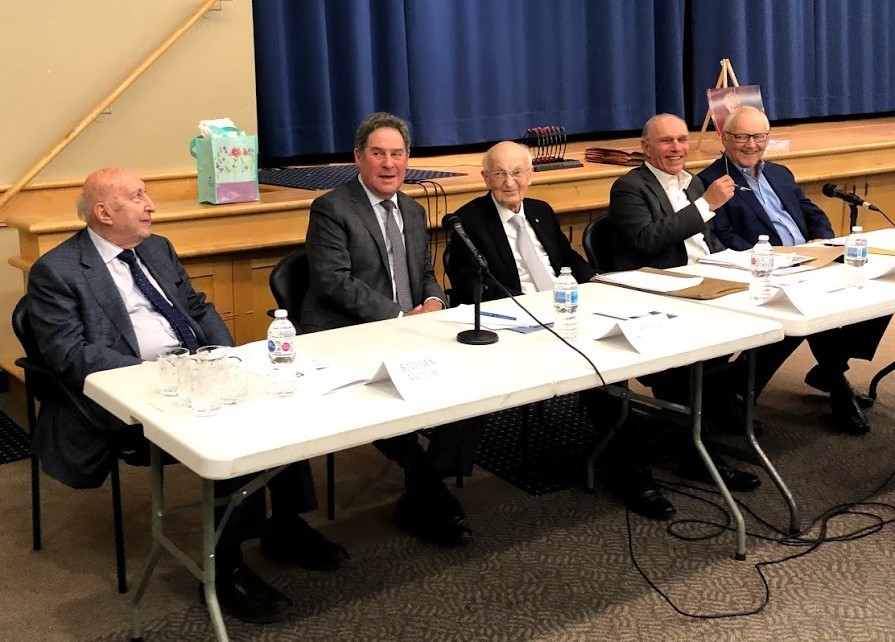 ‘What was it like to be a young Jewish lawyer in Ottawa in the 1960s? What was the legal landscape at the time? Who preceded them? Who where their teachers, their mentors, their heroes? And what were some of their highlights?”

The event, attended by more than 160 people, took place October 24 at the SJCC and each of the participants talked about what it meant or means to be a Jewish lawyer, about their own careers, and about some of the legendary Jewish lawyers who inspired them.

Sol Shinder began the presentations by describing “the landscape that faced aspiring young Jewish lawyers and law students in the first 70 years of the 20th century.”

As Shinder explained, “Virtually all of the ‘white shoe’ law firms were predominately made up of ‘WASPs,’ and up until the early 1970s they rarely employed Jews, women and other minorities as lawyers.”

Of the 206 lawyers who graduated from Osgoode Hall Law School in Shinder’s 1960 class, “the three medalists were brilliant, Jewish and none of them got a job with any prominent non-Jewish law firm. They did however go on to have very successful and distinguished careers in the law, federal government public service, business, academia and the judiciary.”

Such discrimination in those years was not limited to law firms in Ottawa, Shinder added, “It was also prevalent in Toronto, Montreal, Winnipeg and other major cities in Canada and the United States. It also prevailed at business men’s clubs like the Rideau Club, and at major golf clubs like the Royal Ottawa and the Hunt.”

As the major law firms would not hire Jews, it was common for Jewish lawyers to form their own firms. As a young lawyer, Shinder first worked at Greenberg, Wright and Gorsky, before joining with Arnell Goldberg and Sol Shmelzer to form the firm of Goldberg, Shmelzer and Shinder.

“Although we were a predominately Jewish law firm, our clients were from a cross section of the wider community. In fact, our first client … was a French Canadian from Embrun. A law firm like ours could not exist on a strictly Jewish clientele,” he said.

Shinder also paid tribute to Abraham H. Lieff, who graduated from Osgoode Hall Law School in 1929 and practiced in Ottawa for many years. In 1963, Lieff – who served as president of the Jewish Community Council of Ottawa/Vaad Ha’Ir (now the Jewish Federation of Ottawa) from 1953 to 1956 – became the first Jew appointed a justice of the Supreme Court of Ontario.

Stephen Victor began his presentation by paying tribute to Sam Berger, “one of the leading and accomplished lawyers in Ottawa from the 1920s, and for decades thereafter.”

Berger was born in Ottawa in 1900, the son of a rabbi, and grew up to have “many careers: journalist, lawyer, Air Force officer, real estate developer, city controller, and sports franchise owner. He even ran unsuccessfully for mayor against Charlotte Whitten in 1960 and 1962. All of these accomplishments made him a seminal figure in the growth of Ottawa,” Victor said.

Berger co-founded Berger, Greenberg – later Berger, Greenberg and Soloway – which “became the leading Jewish firm in Ottawa, and employed many prominent Jewish lawyers who got their start at his firm,” said Victor. He made many contributions to the city – including serving as president of the Vaad – but became best known as owner of the Ottawa Roughriders football team which played in seven Grey Cup games during his tenure, winning four, before selling the team in 1969 and donating his share of the profits to charity. He later owned the Montreal Alouettes and served as president of the Canadian Football League.

Victor also noted that the Jewish lawyers who preceded his generation made important contributions to the Jewish community of Ottawa, to Israel, and to the City of Ottawa generally, which inspired him to work in those areas.

“So, I became involved in Jewish community affairs locally, nationally, and in connection with the State of Israel [serving as] director of Camp B’nai Brith, president of the Jewish Community Centre, UJA chair, president of the Vaad, national chair of the Canada-Israel Committee, national president of Canadian Friends of Hebrew University, and, chair of the University of Ottawa Heart Institute Foundation. It is so important, especially today, for all of us to be so involved,” Victor said.

Victor said that while the antisemitism that kept Jewish lawyers out of non-Jewish law firms from the 1920s through the ‘50s has largely been eliminated, “the scourge of antisemitism still exists today and has re-emerged in a different, more dangerous and frightening form. We, as Jews, must fight this antisemitism. And, to do so, we must choose to be in the arena, to be involved in Jewish community affairs and in connection with the State of Israel, to play some role in supporting and safeguarding the State of Israel and the Jewish people.”

Lawrence Soloway devoted his presentation to discussing his father, Hy Soloway, who came to Canada from Ukraine at age 10 in 1923, and about Soloway Wright, the Ottawa law firm he founded.

“Although he didn’t speak a word of English when he arrived, he quickly caught up with his classmates, became valedictorian of his class at Glebe High School and went to Queen’s for undergraduate studies. After disappointing his Jewish mother, who sent him off to Queen’s with the gift of a stethoscope, and had fervently hoped that he would become a doctor, he graduated Osgoode Hall Law School in 1939,” Lawrence Soloway said.

Hy Soloway began his legal career at Berger, Greenberg before serving in the Army during the Second World War. After the war, he teamed with brothers Jack and Mervin Mirsky to form Mirsky, Soloway and Mirsky.

Lawrence Soloway explained that Mervin Mirsky left the firm early on to join his family’s beverage business and Jack Mirsky died in 1962. Maurice Wright then joined the firm in 1963 as a name partner.

“The firm would have many different names over the following years but the first two were always Soloway and Wright,” he said.

In 1965, after Sam Berger had moved to Montreal and Mike Greenberg became ill, their firm merged with Soloway and Wright.

Lawrence Soloway joined the firm as a young lawyer in 1976 and notes his father kept working until October 31, 2003. Hy Soloway passed away the following summer at age 90.

“John Mirsky, on behalf of the members of the Ottawa bar, described Mr. Lepofsky as ‘a gentleman in the true sense of the word. His integrity, honesty and enthusiasm for his cause were inspiring.’

“Hy Soloway, [then] president of the Jewish Community Council, said; “For 25 years, Mr. Lepofsky had taken an extremely active interest in the work of the Jewish Community Council of which he was vice-president. His dedication in bringing about a betterment of conditions for all concerned has been unsurpassed. His loss to us and the city as a whole is truly a heavy one.”

“I was called to the bar in 1965,” said Feinstein. “It was my good luck that there was a merger of two large Ottawa law firms, the Soloway firm and the Greenberg firm. There was a need to hire lawyers and I was hired as a real estate junior.

“At that time, Soloway Wright had three of the most competent solicitors in Canada: Hyman Soloway, Irving Greenberg and Murray Citron. They were great mentors to me. Hyman Soloway’s competence is widely known to all and in need of no discussion. Irving Greenberg did the first mortgage of air rights in Ottawa on the building over the Central Library. He was also retained by the Government of Canada to advise them on the development of the Rideau Centre. Murray Citron [arranged] the first high-rise condominium in Ontario and the first condominium conversion in Ottawa – and perhaps the first in Ontario,” said Feinstein.

Feinstein described some of the highlights of his career in real estate law, noting his service as president of the County of Carleton Law Association (CCLA), the association of Ottawa lawyers.

In 1991, Feinstein was elected to be a director of the Ontario Law Society. “I remained on the board as an elected director for 16 years and as life director for another 10 years,” he said. “The Law Society acts in the public interest, licenses lawyers and ensures that they are ethical and competent.”

He was also elected to the board of the Federation of Law Societies of Canada, the national organization of Canadian law societies that regulate Canada’s 120,000 lawyers and was elected president of the federation in 1999.

“With luck, mentoring, teamwork and the support of the partners, associates and staff of Soloway Wright and my family, I have had and am still having an interesting legal career,” Feinstein said.

Leonard Shore began by speaking of his hero, Uncle Michael (Michael Greenberg), his accomplishments in the legal and building fields as well as to his contributions to Ottawa and its Jewish community. He also spoke of his family and what it was like growing up in the Billings Bridge neighbourhood in the 1940s and finished with some amusing anecdotal criminal law stories.

“Mike [Greenberg] and Hy [Soloway] were the two giants of my youth in the legal, Jewish and general communities who inspired me with their commitment to family, profession and Jewish values. Their sons, my cousins, Steve [Greenberg] and Lawrence [Soloway] are my present day giants with their philanthropic instincts, largely unheralded, who would make their fathers proud,” said Shore.

“My father, Shier, sitting in the audience with us, was deeply moved and impressed by the event. I know I speak for both he and my siblings, all of whom have attended the memorial lectures, when I express how delighted we were by how the Ottawa Jewish Historical Society has found a way for my mother to continue to inspire and strengthen our community. We look forward to even greater attendance next year,” said David Berman.