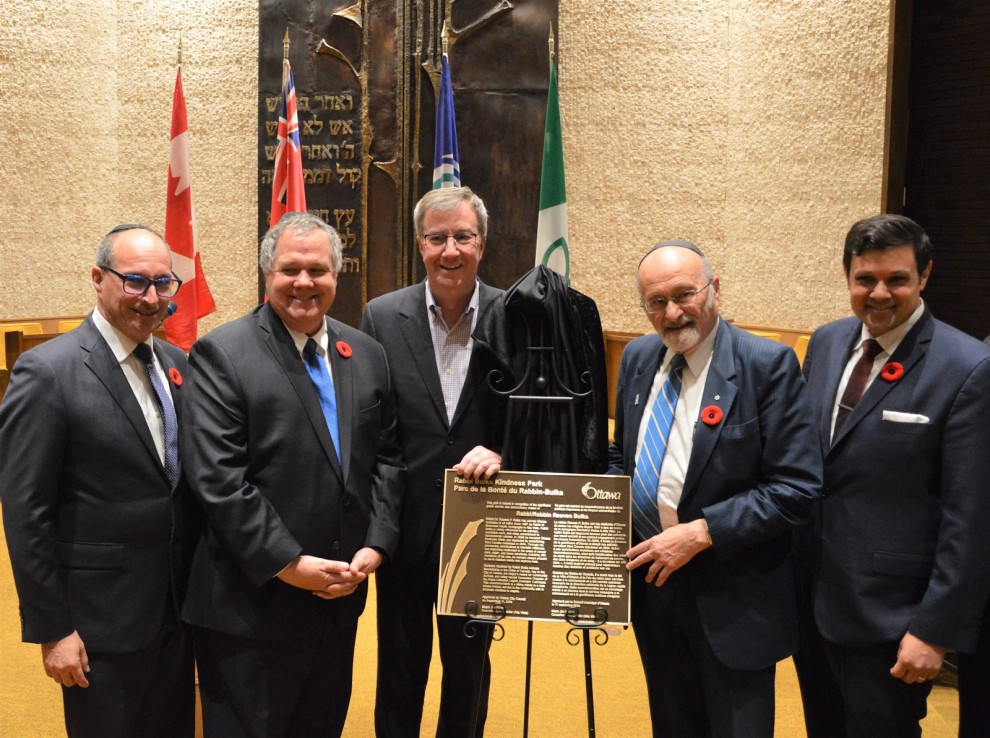 ‘Thank you for all you’ve done’

The ceremony to rename Featherston Park as “Rabbi Bulka Kindness Park” in honour of Rabbi Reuven Bulka was attended by community members and by leaders from across the political and religious spectrum.

‘If I were to name all of Rabbi Bulka’s contributions, we would be here for a long time,” said Ottawa Mayor Jim Watson.

Watson was speaking at the official dedication of Rabbi Bulka Kindness Park on October 27. While officials had hoped to hold the ceremony outside in the park, heavy rains that day pushed the ceremony indoors at Congregation Machzikei Hadas, which is adjacent to the park in the Alta Vista neighbourhood. Rabbi Reuven P. Bulka served as spiritual leader of Machzikei Hadas from 1967 until 2015 and is now the congregation’s rabbi emeritus.

The decision to rename Featherston Park on Virginia Drive as Rabbi Bulka Kindness Park was made by Ottawa City Council on September 11. 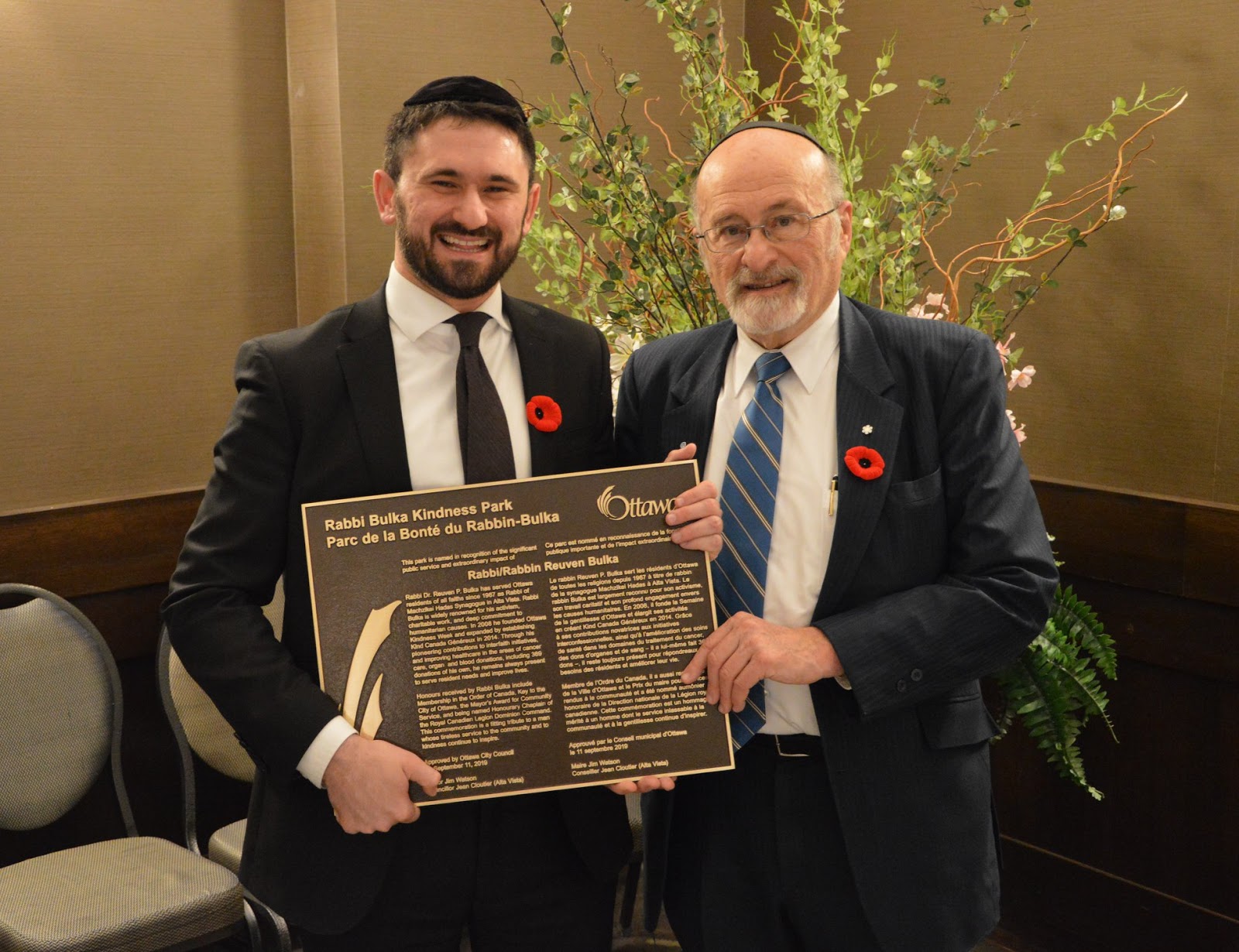 Rabbi Idan Scher (left), spiritual leader of Congregation Machzikei Hadas, congratulates Rabbi Reuven Bulka, the congregation’s rabbi emeritus, at the dedication of Rabbi Bulka Kindness Park.
“The varied turnout you’ve had today, from people across the political and religious spectrum, and the community itself, is a testimony to the high regard all of us have for you,” Watson said to Rabbi Bulka during his remarks.

Watson listed just a few of Rabbi Bulka’s many achievements, including founding the Ottawa-based charity Kind Canada in 2008, donating blood with Canadian Blood Services 369 times and receiving the Key to the City of Ottawa in 2010. Rabbi Bulka has also taken leadership roles supporting healthcare through Ottawa’s Regional Cancer Foundation, the Children’s Hospital of Eastern Ontario and the Trillium Gift of Life Network, and with many community groups including United Way, the Canadian Christian-Jewish Consultation and Canadian Jewish Congress. He is currently co-chair of the Jewish Federation of Ottawa Annual Campaign.

Rabbi Bulka’s passion and concern for humanity have led him to become “not just a leader for the Jewish community, but a leader for all citizens in a way that is truly remarkable and unprecedented,” Watson said. “Thank you for all you’ve done for the community. You continue to amaze all of us.”

City Councillor Jean Cloutier of the Alta Vista Ward brought forward the motion to rename the park in honour of Rabbi Bulka. Cloutier said it was “very fitting” as the rabbi is “widely renowned for his activism, charity work and his deep commitment to humanitarian causes.”

During the park’s commemorative naming process, Cloutier said he received numerous letters from community members in support of renaming the park for Rabbi Bulka.

“As councillor for Alta Vista, it has truly been my honour to have played a modest role in this process, and it is my privilege to acknowledge the wonderful man Rabbi Bulka is,” Cloutier said.

Bram Bregman and Ron Prehogan, co-chairs of the Machzikei Hadas Centennial and the Celebration of Rabbi Bulka’s 50 years of Leadership, praised the rabbi for his decades of service to the community.

Prehogan said while the phrase “random acts of kindness” is popular, in Rabbi Bulka’s case there is “absolutely nothing random about his kindness.” When Bregman asked by a show of hands who had been helped by Rabbi Bulka, many in attendance at the ceremony raised a hand.

Bregman and Prehogan announced that in celebration of Congregation Machzikei Hadas’ 100-year anniversary, they intend to work with Cloutier to build a structure at Rabbi Bulka Kindness Park that “all residents of Alta Vista can benefit from,” such as a community garden, theatrical stage, walking path or park benches. 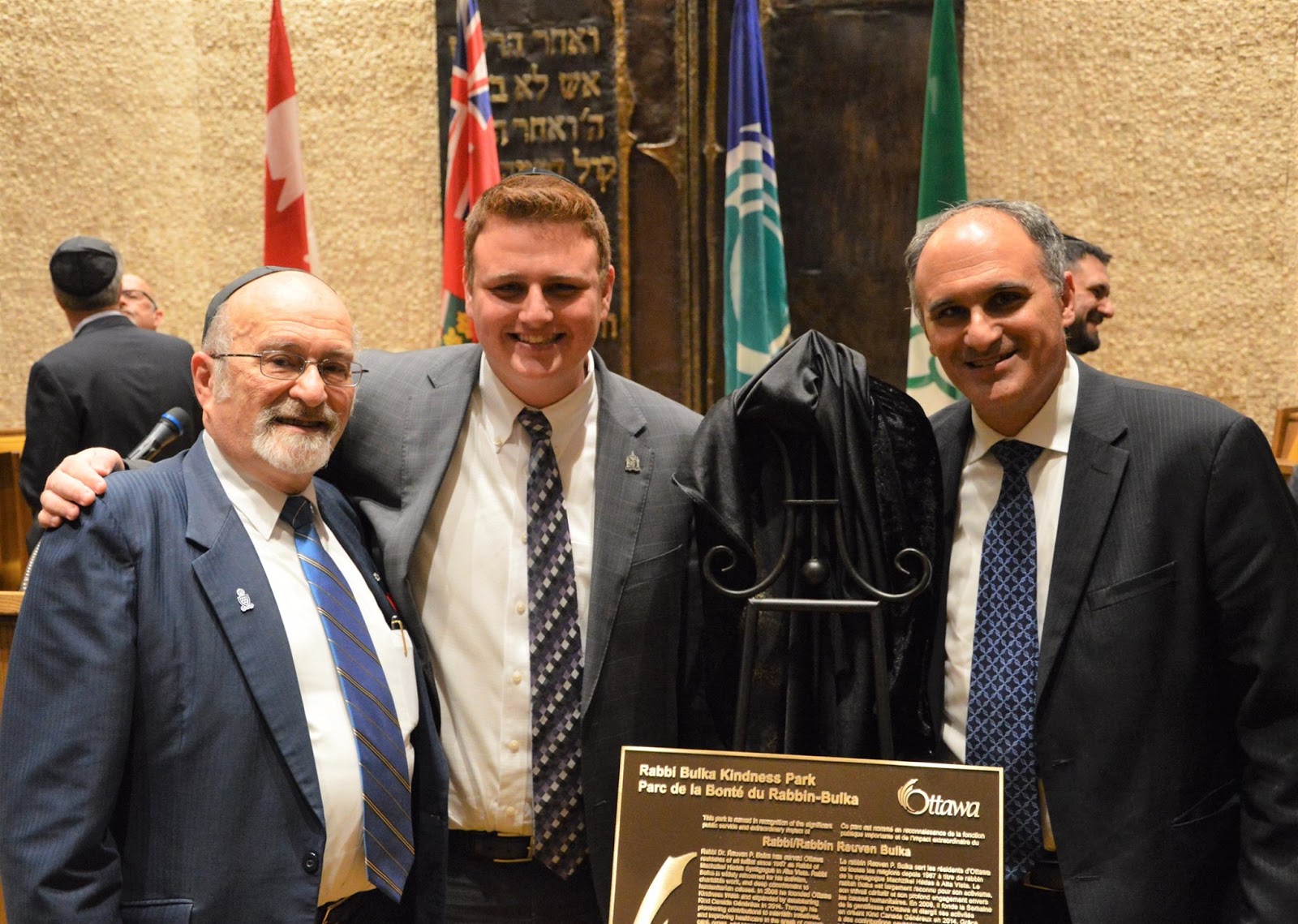 Rabbi Reuven Bulka is congratulated by his son, Shmuel Bulka (right) and grandson Avi Bulka (centre) who came from New York for the ceremony dedicating Rabbi Bulka Kindness Park.
After receiving a lengthy standing ovation, Rabbi Bulka shared a “very simple idea” from the second chapter of Pirkei Avot, “it is not incumbent upon you to finish the job, neither are you free to desist from it.”

Rabbi Bulka said he hoped the park could be a “repository for kindness” where everyone could get along and be included. He added a wish that all would be sure to “park a little bit of kindness” wherever they went. Then the kindness park will be something more than “just a piece of geography, it will be part of real life.”