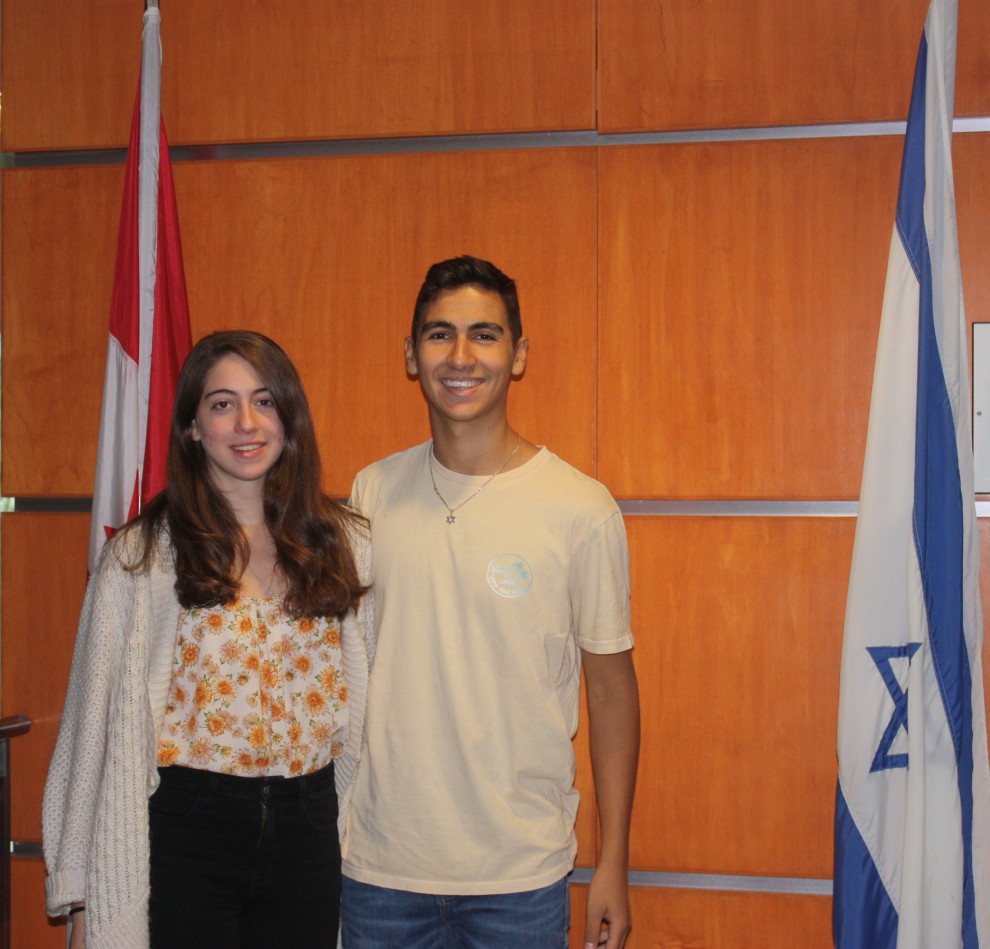 The Federation shinshinim program brings young Israeli emissaries to Ottawa for a year of voluntary service during a gap year between high school and their military service. While in the city, the shinshinim help young people in Jewish schools, congregations and camps to “enhance their Jewish identities and ties to Israel,” Afota explained.

After 10 months spent working with schools, Jewish agencies and congregations, the pair were feted by Federation with a pizza party on June 13 at the Soloway Jewish Community Centre. Afota and Haimovich are now spending the summer working as counsellors at Camp B’nai Brith of Ottawa (CBB) before returning to Israel to begin their military service.

Haimovich said her time spent in Ottawa has been “an honour.”

“We’ve been here teaching these kids all about Israel, but at the same time we learned about ourselves, and about all these amazing people we’ve met in this city on the other side of the planet,” she said.

Afota described his time in Ottawa as a “lifetime experience” he will tell his grandchildren about. “I learned a lot about myself and about Judaism.”

The shinshinim stay with three different host families from the Jewish community while in Ottawa – becoming part of the families as they join them in their day-to-day lives and activities.

Haimovich said witnessing the dynamic of each family was “such an interesting experience,” and allowed her to learn more about people.

Afota said living with the host families was an “amazing” experience, especially seeing the “dynamic of each family.”

“Of course it’s difficult because it’s different than your house, but after a couple months of living with them they feel like your second family – your home away from home,” he said.

Asked about the similarities and differences between Canada and Israel, Haimovich said Ottawa’s diversity reminded her of Israel. “There are so many different cultures, colours and languages that people just accept it as normal, and I love that about this city,” she said.

Afota said compared to Ottawa, people in Israel are “much more direct, and constantly checking the limits of personal space.”

Kara Goodwin, Federation director of community collaboration, said the shinshinim have been “amazing” to work with, and she has seen them grow throughout their time here.

“They are amazing facilitators, very professional and really care about the community. That shows in the work they do,” she said.

Goodwin highlighted the “deep relationships” the shinshinim developed with community members, as well as the fact that many people living in Ottawa now have personal connections to Israel.

Speaking to the Bulletin before departing to spend the summer at CBB, Haimovich said she was not sure what to expect, as summer camps on lakes are “not a very Israeli experience.”

“From what we’ve heard it’s going to be amazing, but it’s a weird time for us because we are saying goodbye to everyone, yet some of the kids we have worked with all year will be at camp,” she said.

Afota said he was excited to attend CBB, but was also sad to leave his Ottawa friends behind. “When we left Israel we knew we would be coming back, but now that we are leaving Ottawa, we will not be back for at least three years,” he said.

The shinshinim both gave thanks to Ottawa’s Jewish community for “making our year the best it could be.”

Ottawa will welcome a new pair of shinshinim in late August.