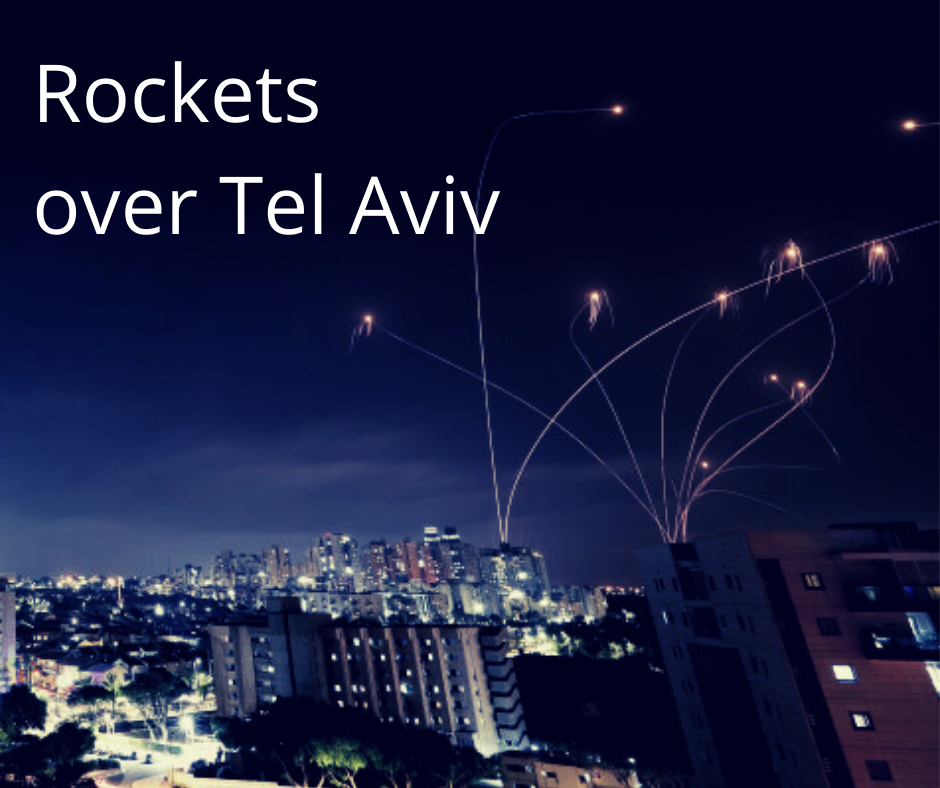 By Janet and Jonathan Isserlin

Tel Aviv is different from Jerusalem, and, of course, different again from Ashkelon and the area around the Gaza strip. But it's all Israel, and we are now all Israelis together.

As we sit in the shelter in the basement of our central Tel Aviv apartment block, together with the other apartment owners, (at least those young enough and mobile enough to make it down the stairs of our elevator-less building in the 90 seconds of lead-time that we get from the sirens), we and our neighbours and their pets, listen for the booms of the rockets being taken out by the Iron Dome interceptor system. At least we hope that that is what the booms represent!

We went down twice yesterday at lunchtime (Shabbat lunch postponed) and once again at midnight. Our friends, Miriam and Aharon Breiner in Ashkelon, former Hillel Academy teachers as well Israeli Shlichim in the 1990s, have not had it so easy. They have been living in their Mamad, (safe room), almost continuously for the past five days. Their nerves are frayed. Ours is merely alert.

Israel is under attack. It is not just the physical attack by the cowardly, opportunistic, terrorists in Gaza. The rioting and fighting and burning in the 'mixed' cities (Lod, Acco, Jaffa, Jerusalem, even Haifa), is cause for major concern. At Kiddush after Shabbat services in shul yesterday, an ER doctor who works in Sha'arei Tzedek Hospital in Jerusalem, (previously regarded as the epitome of co-existence), told me that they are now separating Jewish and Arab patients who are admitted to the ER for fear of problems.

Our new friends (from shul, from Ulpan), our old friends (from Ottawa and other parts of the Galut) and, of course, our family, contact us to make sure we are OK. We, for our part, do the same with others. We feel part of the body of this Jewish state. We hear what all the haters here and around the world say about Israel, and we thank G-d for its existence and its strength and moral courage. Had it been here 80 years ago maybe the outcome of the Shoah would have been different.

This too, no doubt, will pass. We will be able to walk freely along the streets and the seashore without having to wonder where the nearest shelter is. Just as one crisis (COVID) has been overcome by Israeli persistence and ingenuity long before the rest of the world, this too will be overcome and we will, once again be able to live freely in this wonderful, vibrant, ultramodern, multicultural, Jewish city on the Mediterranean.