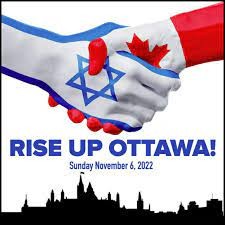 In the past year, the Jewish community of Ottawa has experienced a disturbing rise in antisemitism, particularly in public schools. In response, award-winning teacher and local activist Lisa Levitan has organized Rise Up Ottawa! The event is a grassroots movement focused on combatting discrimination against Jews while celebrating Jewish culture and identity.

“The goal of the event is to get our entire Jewish community together, inform them of what’s happened, and teach children how to stand up for themselves in a peaceful and safe way,” said Levitan, who also founded and co-chaired the Ottawa-Carleton District School Board-sanctioned Jewish Employee Group, and launched the Facebook group Ottawa Against Antisemitism.

“The alarming amount of Jewish educators and students hiding their identity is unacceptable. I want people to know they’re not alone. If our whole community comes together, perhaps it won't be as scary.”

Rise Up has a full agenda of speakers and promises to be a profoundly impactful event. In addition to welcomes from local religious and political leaders, there will be students who discuss what antisemitism looks and feels like in schools, presentations on becoming your own advocate and a song dedication by International Jewish Hip Hop Superstar, Kosha Dillz.

The afternoon includes educational breakout sessions led for various ages by NCSY, Hasbara Canada and FOYER - Stand With Us Canada. Age specific information will be shared for adulits and young people can advocate effectively.

To round out the day, learn and record a music video to ‘One Day’ with Koolulam, which is coming all the way from Israel. Koolulam is a social musical initiative aimed at empowering communities and strengthening the fabric of society. Through collaborative creative experiences, they bring together people of different backgrounds, cultures, faiths and geographies. Since Koolulam’s formation, they have shown how we can harness the power of musical harmony, and use it to inspire harmony in humanity. Hundreds of thousands of people have already joined the movement to create social change through musical cooperation.

Get Rise Up! Tickets here.