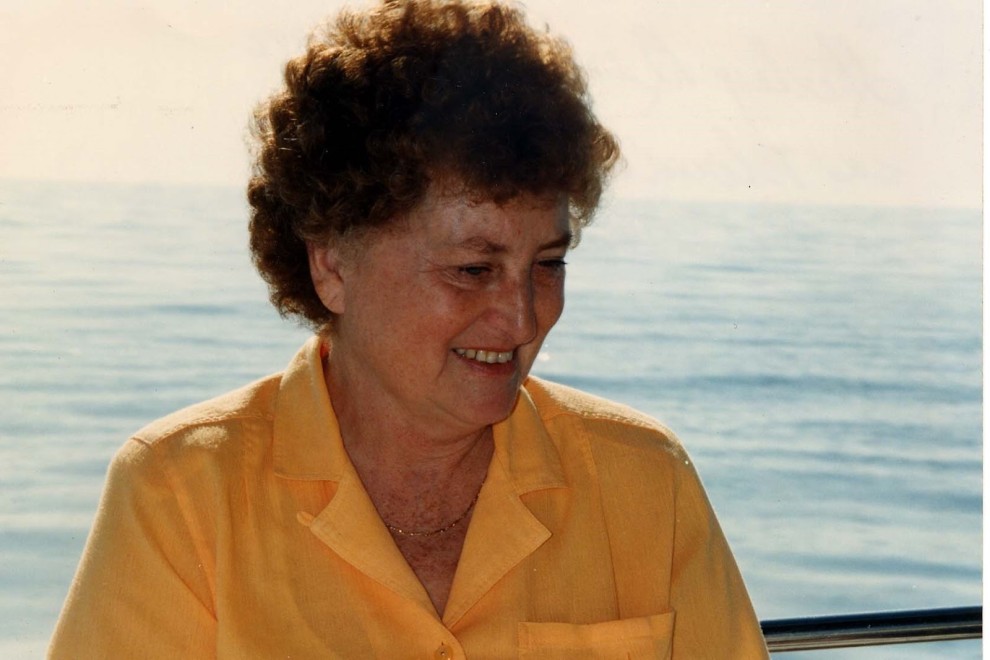 Shirley Berman, founder of the Ottawa Jewish Archives, died at home in Ottawa on September 2, at age 89, following a courageous battle with cancer. Two of her successors at the Archives, current archivist Zoe Thrumston and retired archivist Dawn Logan, remember Shirley and the impact she and her work had on them and on the community.

This past summer, an acquisitions officer from the Yad Vashem Archives in Jerusalem made a visit to the Ottawa Jewish Archives. She was on a cross-Canada tour, in search of material related to the Holocaust, including scheduled stops in Toronto, Montreal, and at our own Archives here in Ottawa. While she knew she would find some material of interest, she was blown away by the scope of our small institution. For an archives as small as ours, she was impressed by how well organized our vault was, by our metadata, by our online database, by our digitized photographs, and by how smoothly the archives ran.

While I was of course happy to receive the compliments, the credit really goes to our founding archivist, Shirley Berman.

As the current archivist for the Ottawa Jewish Archives, I cannot say enough about what a force Shirley was. Twenty years after she retired, Shirley routinely stopped in to offer advice and check on how things were running. Her appreciation for history, and the importance of community memory, was an inspiration.

Shirley was born in Toronto in 1930, the daughter of Baruch (Benjamin) and Helena (Freedman) Hettler. Shirley and Shier Berman met in Toronto through their shared Zionist youth interests. They married on May 24, 1951 in Toronto and shortly afterwards spent a year in New York to lead a Zionist youth movement called Dror Habonim. They returned to Toronto in 1953 when Shier began his post-graduate work at University of Toronto.

Shirley arrived in Ottawa in 1957, with her husband, when Shier began work at the National Research Council.

Shirley’s foresight for the importance of memory keeping was unique. She saw firsthand what our community needed, and took the correct steps toward making it happen. Shirley will be remembered throughout the community for her efforts in creating and moving forward the community’s archives. Today, any researcher can comb through the archives’ holdings and recognize Shirley’s unique and dedicated voice.

Shirley is survived by her husband Shier, their three children, Reva, Eli and David, and four grandchildren.

Last March, Shirley Berman hosted a luncheon for some of the former Ottawa Jewish Archives archivists including myself, Laurie Dougherty and Marcia Mordfield. It was a most enjoyable occasion and although we do not see each other often, there never was a lull in the conversation as we learned about our various archival interests since leaving 21 Nadolny Sachs Private.

None of us will forget that event and now we are thinking of Shirley, how we met and her many accomplishments.

Shirley and I met through a public relations project for Those Pesky Weeds, the diary of Harold Rubin. A team of soon-to-be graduates of an archives technology course at Algonquin College took up Shirley’s request for posters to be used in promoting the book. Shirley oversaw all aspects of the book’s production and reached out to this new archival course for assistance. It showed how she was forever observant to new possibilities that would create interest in Ottawa Jewish history.

Shirley understood the need for archival publicity and early in her career, curated an important exhibition at the National Archives entitled “Journey into our Heritage.” Lowertown tours and reunions were engineered by Shirley and based around the York Street School, which so many Jewish children had attended. Shirley was a founding member of the Ottawa Jewish Historical Society and for many years she maintained a seamless thread of management between the society and the Archives.

The major vehicle for preserving Ottawa’s Jewish history was establishing the Archives at the Jewish Community Centre on Chapel Street. It featured a temperature controlled vault and a bright workroom for researchers and staff. It was there that all the early editions of the Ottawa Jewish Bulletin and the Ottawa Jewish Telephone Directory were compiled, and the minutes from meetings of the Jewish Community Council of Ottawa/Vaad Ha’ir from its inception were saved. Early synagogue records were also accumulated. Shirley understood the importance of these early building blocks. She worked closely with Hugo Levendel, who deposited his invaluable collection of ByWard Market photographs from the 1930s. She also made certain that groups such as the Labour Zionist Council of Ottawa and Dror Habonim were properly represented in the Archives.

Shirley also maintained an interest in Jewish artifacts – including the Murray Street Synagogue murals which she, along with art historian Reesa Greenberg and architect Martin Weil, saved – and collected them in the Archives with the hope of eventually starting a small museum.

When plans were formulated for the new Soloway Jewish Community Centre in the west end, Shirley made absolutely sure the Ottawa Jewish Archives would be part of the plan and the move. It was a proud moment for her when the move occurred in 1999 into a space within the Greenberg Families Library which includes a large vault, a workroom and an office.

With this major move, Shirley stepped back from day to day archival work and Marcia Mordfield and I became the archivists.

As Marcia recalled, “I don’t ever remember Shirley coming into the Archives to tell us we were not doing things the way she had previously done them. Instead, she embraced the change and was our biggest supporter. She was a mentor of Dawn and Dawn became a mentor to me. I like to think that I mentor archival professionals and therefore Shirley’s teachings are passed on. I will miss her kindness, warmth and smile. She is, and always will be, the reason the Ottawa Jewish community has a preserved history.”

Laurie Dougherty followed me as archivist. She described Shirley as a “widely known and respected person for her pioneering efforts in Ontario’s small archival community in the 1980s. She was a dedicated advocate for the Ottawa Jewish Historical Society and the Ottawa Jewish Archives for many years after her retirement.”

Laurie confided that she “learned a lot about being a community archivist from Shirley. To her, it wasn’t just about collecting the records – it was about documenting the lives of the people in the community. I looked forward to her occasional visits to the Ottawa Jewish Archives and feel privileged to have known her.”

Laurie added that one of Shirley’s major achievements was the series of oral history interviews she conducted in the late 1970s, some of which were in Yiddish. “She knew that by capturing the actual voices of members of the community, she was preserving more than just stories for the next generation.”

“Shirley Berman’s name was legion in the history of the Ottawa Jewish Archives,” said Janice Rosen, archivist of the Alex Dworkin Canadian Jewish Archives in Montreal. In the 1970s, archives were not more than a few piles of documents sitting in a corner. By the ‘80s, the new buzz words were ‘sorting’ and ‘classification’ and Shirley was in the thick of this.”

When Shirley stepped back from the day to day operations of the Ottawa Jewish Archives in 1999, she had time to pursue other historical interests. At the top of her list was detailing the life of legendary community leader Lillian Bilsky Freiman. She reviewed all aspects of Freiman’s life and her thoroughly researched entry is now part of the Dictionary of Canadian Biography, v. XVI. This past May 23, Shirley attended the first lecture in the Ottawa Jewish Historical Society’s Shirley Berman Lecture Series and took great delight that the lecture was entitled “Lillian Bilsky Freiman: A life of Giving.”

Shirley’s very last project was the editing, along with Judith Weinman, and publishing of Shirley Steinberg’s book, Men Darf Lakhn: A Collection of Yiddish Skits, Plays and Monologues.

We are the richer for knowing Shirley Berman and her life of giving and the Ottawa Jewish community is richer for her archival foresight, perseverance and dedication in preserving its history.