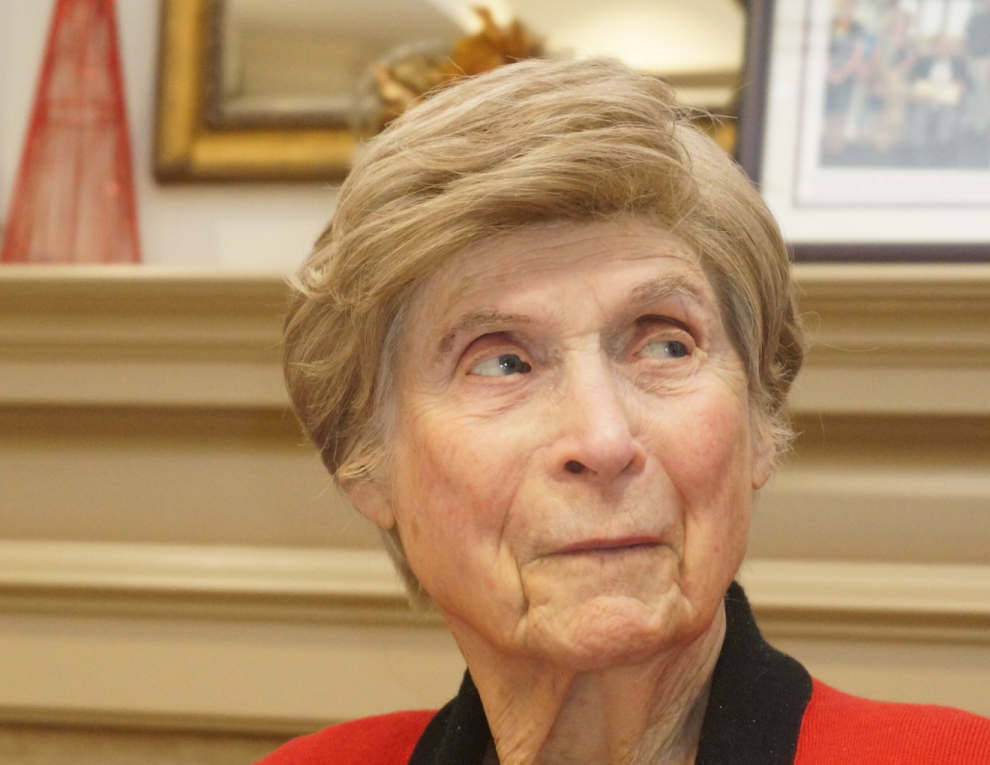 Ruth Soloway, with her late husband Hyman Soloway, a well-known figure in Ottawa’s Jewish community and beyond, passed away on March 23 at age 104. She is remembered in this article by her son, Lawrence Soloway.

My mother Ruth Soloway was born on July 3,1915, the third child of Samuel and Sophie Spevak, who had emigrated from Russia in 1901. She enjoyed a happy childhood in Ottawa, the city she would love all her life. Her father was a successful businessman and the family lived in a large three-storey home in Sandy Hill. She could remember tobogganing in Strathcona Park with horse-drawn carriages passing by. But challenges arose. Her mother had a heart attack when Ruth was 10 years old and died when she was 14. Thereafter, she was raised by her older sister Sadie, to whom she was forever devoted. Her father’s business – a tannery of raw hides and fur sales, located where there is now a Marriott Courtyard in the ByWard Market – failed in the Depression and never recovered.

Ruth adored her father, who was a man of considerable stature throughout his life. He was the president of his shul and well known throughout the city. In the 1920s, Canada had an immigration program for young men with Canadian relatives who were willing to work as farm labourers. Her father brought in over 50 young Jewish “cousins” and “nephews” who were then placed in the farm owned by his friend, Mr. Billings. Many of these men later moved on to Montreal, Toronto and the United States. Some years later, Ruth attended a dinner in Detroit with her father held by the men he had brought over and their families. It was a deeply moving experience for her.

Ruth would say she was fortunate to have had two men in her life whom she adored. The other was Hyman Soloway, her husband of 60 years. Hy walked from his home in Billings Bridge to Glebe High School every day and Ruth first met him when she was in Sammy Greenberg’s car and Sammy offered Hy a lift. She recounted that she liked him immediately, but as an attractive young woman with a healthy number of suitors, she didn’t give him much thought until 1939 when they were both briefly employed at the Berger, Greenberg law firm.

Ruth had completed secretarial and clerical training at Ottawa Technical High School and Hy graduated from Osgoode Hall in 1939. They both worked at Berger Greenberg for approximately one year before Hy enlisted in the army. During that year, she worked as Hy’s secretary, and as he noted, she was a terrible secretary, but he was the most junior lawyer in the firm.

Their romance grew and they were to be married on December 3, 1944 as Hy had arranged a leave from his duties as a senior intelligence officer at Camp Borden. At the last minute, his commanding officer asked him to rearrange his leave so that he could serve as a translator with a visiting Russian general, and Hy called Ruth to tell her of the change in plans. She told him that if they didn’t get married that weekend he could never come back – so Hy found an army cook to take over as the Russian translator. She established her role as the boss early in the relationship.

The year 1944 brought tremendous sadness as well. Ruth’s younger brother Jackie, a bomber with the Royal Air Force, died in an attack over Stuttgart – a loss, she recounted, from which her father never recovered.

After the war, Hy went into a law practice with the Mirsky twins – Jack and Mervin – and Hy and Ruth had their first child, my sister Susan, in 1946. They lived in an apartment on Charlotte Street, then in a semi-detached on Chapel Street. I was born in 1950, and the family moved to the west end in 1952, to the house on Hillcrest Avenue where they would stay until 1969.

In those early years after the war, they were very careful financially as Hy was in the first stages of building his practice. For example, we didn’t have grass in our back or side lawn for the first few years because we couldn’t afford it. And my mom had several drawers in the kitchen stuffed with Gold Bond stamp books. But by 1962, Ruth was featured in an article in the Ottawa Journal identifying the 10 most fashionable women in the city. She was already known for her elegance, poise and charm – and would remain so for the rest of her life.

By this time Ruth had a truly large number of great friends whom she maintained throughout her life. It is impossible to name but a few, such as Fay Loeb, who introduced her and guided her in the world of art, Roberta Pollock, who travelled the world with her, both Mirskys (Barbara and Anne), Lyla Rasminsky, Peggy Laskin, Belle Shenkman, and many more. She was devoted to her friends and spent many mornings on the phone talking to any number of them. This was fine by her husband, who could then depart to the office or Rideau View, depending on the season. She was good to her many friends, loyal, committed and truly interested in their lives.

It’s fair to say that from the 1960s to the end of the century, Hy and Ruth were perhaps as socially prominent a couple as there was in Ottawa, both in the Jewish community and in the city generally. Hy’s practice was very successful and he assumed many leadership roles, such as president of Congregation Beth Shalom, president of the Jewish Community Council of Ottawa/Vaad Ha’ir, Civic Hospital board chair, and member of the boards of governors of both the University of Ottawa and Carleton University. As a result, they attended many charitable events and galas, and were staples of the Ottawa social scene. In addition, they regularly attended dinners and other outings with their many friends. Notwithstanding this, Ruth was an engaged and committed mother. She never missed one of Susan’s ballet performances or my baseball games (regularly followed by a visit to Royal Burger or Scott’s Chicken Villa). She drove the kids to Hebrew school and piano classes, although in my case, the latter was for a very short period of time. 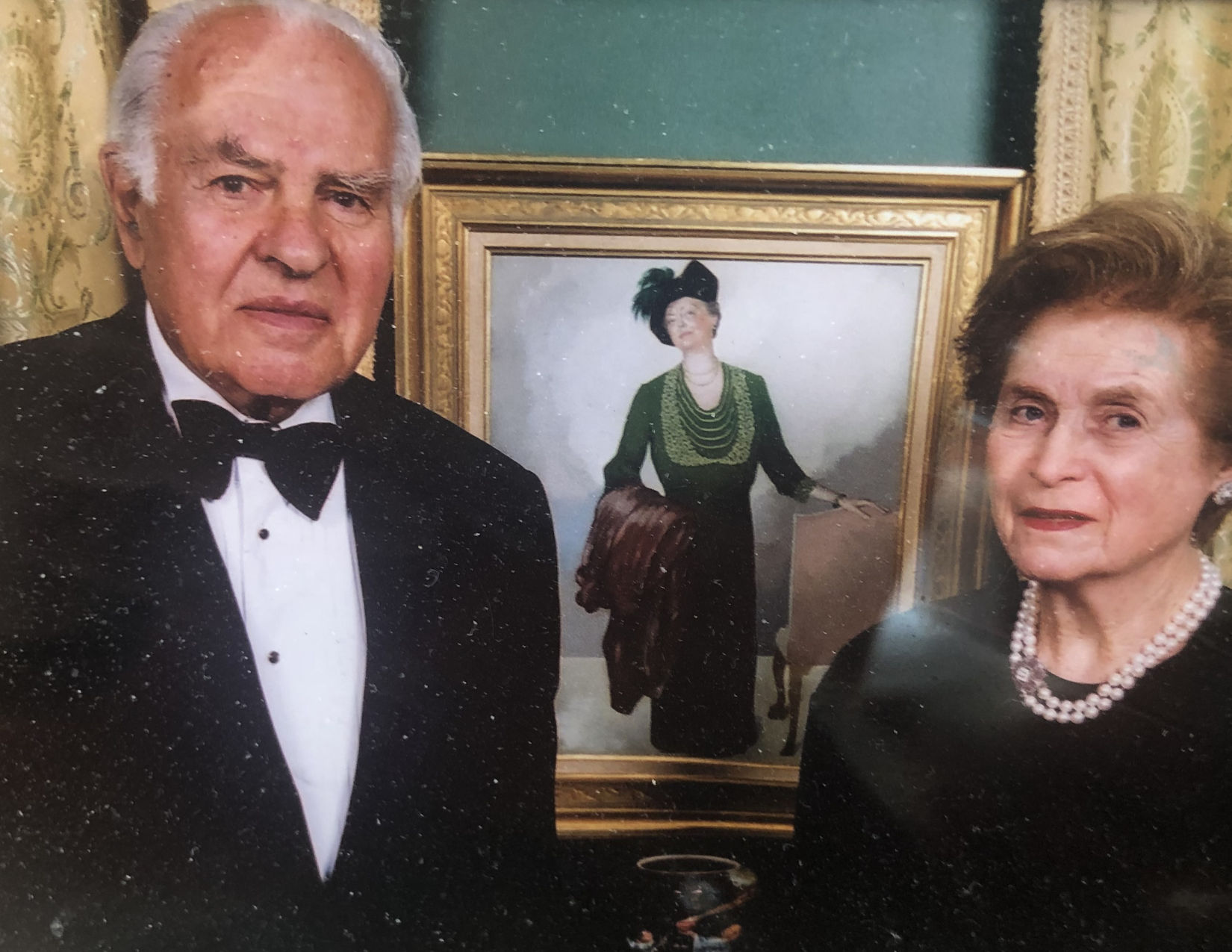 After the kids had moved out, Hy and Ruth moved to Rockcliffe in 1969, to the house on Acacia Avenue, where she would remain until 2011. Through these years, Ruth gradually assembled her formidable collection of Canadian art, at a time when Canadian art had not yet achieved worldwide recognition. She was active with the Maycourt Club delivering books to patients at the Civic Hospital, and through her involvement with the National Gallery, began her career as a world traveller.

It often seemed that there was no country Ruth hadn’t been to, and this was a source of endless amazement to her grandchildren. They couldn’t believe that she had been to Cambodia, New Zealand, Tanzania, Uruguay, Romania, Costa Rica, South Africa, China in the early 1970s, and all points in between. Until the early ‘90s, she did many of her trips with Roberta Pollock as Hy couldn’t countenance taking off three weeks from work at a time. But after he turned 70, he began to travel with her and found that he enjoyed it very much.

Hy died in 2004 and this was a hard blow for Ruth. They were a wonderful couple together and she spent most of the first year after he died in seclusion. But she slowly came back and this led to an amazing final act until her passing on March 23, 2020. She had always been a central and beloved presence in the extended family, but as her youngest grandchild would say, she became the queen. She was made of strong stuff and survived double angioplasties, colon cancer surgery, two broken hips and a bout of C. difficile. Most remarkably, her memory remained formidable and her mental acuity was amazing to the very end. It is worth noting that she regularly did crossword puzzles and played bridge, and she credited both activities with maintaining her mental capacity. I think they helped, but the real reason was her deep engagement with life and the people she loved and enjoyed.

Ruth died at the age of 104. As we said in the obituary, she lived a long, full, rich and happy life. Perhaps that says it all.

From the partners of Soloway Wright:

“Ruth Soloway was fond of the expression ‘less is more,’ words which reflected a modesty and minimalist elegance in her nature but do not perfectly apply to a woman capable of capturing the exuberant heart of the late Hyman Soloway, her devoted husband and partner throughout a long lifetime of adventure in the worlds of art, literature and history. She was his instigator and guide the moment he stepped out of the office, and he was happy to submit to her benevolent rule in a kingdom without clients and troubles.

“To the rest of us there was nothing ‘lesser’ about her. She radiated a queenliness, lightly worn, as she sailed through a long, full and joyful life. She was herself to the very end.

“The partners of Soloway Wright remember her with affection and awe.”

Photo 1: A recent photo of Ruth Soloway at the Rockcliffe Residence. (Mark Achbar)