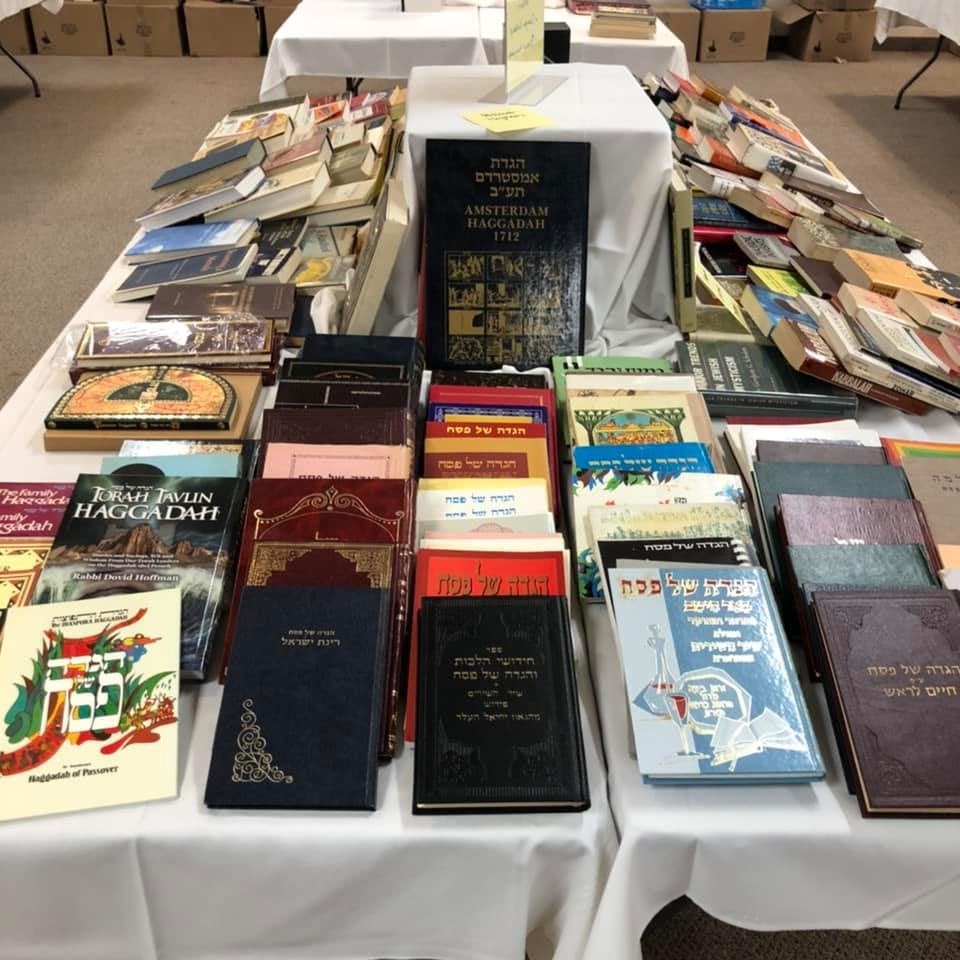 “It was like a treasure hunt — we never knew what we’d find when we’d open up a box.”

That’s how Stacy Goldstein refers to the massive task of unpacking, organizing and cataloging the library of 10,000 books left behind by Rabbi Reuven Bulka Z”L.

“Rabbi Bulka was a very non-material person, but his library was such a reflection of who he was, so we had this big question of what to do with his library,” she said.

“It’s hard to comprehend what he had. Books that spanned every possible topic, over decades of collection.”

The team helping to clear out the house packed the books into hundreds of boxes, which were brought to the social hall at Congregation Machzikei Hadas (CMH). One person was hired to start sorting, but there wasn’t a clear plan for what would happen next. After a few weeks, Goldstein said they realized the size of the project ahead.

“And it kind of stalled there … What were we doing? How were we going to sort them?” she said. “There were just so many books … so we wanted to put together a library.”

They turned a playroom in the synagogue into what is now the Rabbi Bulka Library, which will hold a lot of the books, but still not the full collection.

“I cannot stress how amazing volunteers were for this project. I’m not sure how it landed in my lap, but I said I’d figure out how we could sort and organize … but I knew we needed manpower,” said Goldstein. “Many, many people came, members and non-members. It took us about a month of working three to four nights a week in several hour blocks. We’d set up the room in this massive assembly line.”

“Every single book was picked up and a decision was made about it by two volunteers and moved to the correct part of the room. People would just walk back and forth taking thousands of steps. Then when we’d have space on the table and unpack more boxes and pile more books on it!”

CMH decided to do a book sale to allow the community to purchase some of the collection. Some books were also recycled due to their age or condition.

“A lot of books — many, many books — were inscribed to Rabbi Bulka, from the author or something from the person who gave him the book,” said Goldstein. “So it wasn’t just sorting books — every book had a story. Who did it come from, why was it given to him? It gave us a look at who Rabbi Bulka was. Seeing so many of these things, the notes written to him, moments of his life captured because the program from an event he attended was slid into the book. It was a really amazing, overwhelming process to be a part of.”

Many of the handwritten pieces or event mementos were pulled out of the books and returned to the families who’d given it to Rabbi Bulka, or the Ottawa Jewish Archives and Library and Archives Canada.

After all the books were sorted, a whole new team of volunteers showed up to shelve books based on their topics, with another team organizing the sales tables, with a sale held in November and in early April. Some books will also be donated to the Ottawa Public Library, or gifted to other cities where Rabbi Bulka held meaning.

Goldstein said every time a new volunteer showed up, they had two things to say:

“‘How did they fit in his house? I can’t believe he had this many books!’,” she said people would usually first exclaim. “They were in awe of the sheer number of books.”

“And also ‘I can’t believe he read all these,’” Goldstein added. “The diversity of the topics that were there was so broad — world religions, international conflicts, psychology, it was the most wonderful collection. People said Rabbi Bulka could talk to you about anything and this is why.”

For the volunteers, the work to bring the library to life was a labour of love.

“A final gift to Rabbi Bulka, to give back to him all that he gave to our community,” said Goldstein. “For many people being part of this project, it was their way of saying goodbye. It was sad for some people, but gave a lot of people closure — me included.”

Goldstein said they’re still working out whether or not the Rabbi Bulka library will be a lending library, or the kind of library where people are welcome to come and sit and read. The books are not formally cataloged in library-style yet — that’s the next step, said Goldstein.

“If anyone wanted to just come and check it out, there is space there for community use. We want people to use it,” said Goldstein. “The vision is that on Shabbat morning, people are sitting in there and taking some time in a nice quiet space. We hope that our youth can use it as a resource. We know that everything is online today, but there’s still something about sitting in a room full of books.”