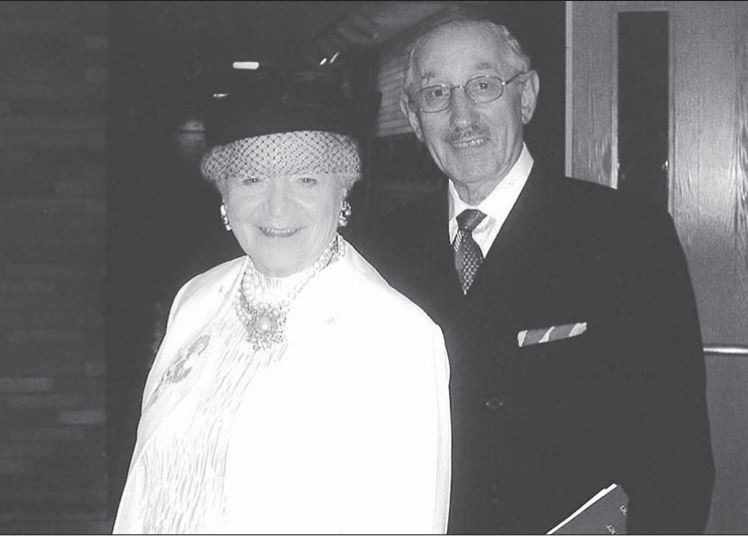 Gitta and Cantor David Aptowitzer shown in an Ottawa Jewish Bulletin photo that accompanied an article about their move to Motza, near Jerusalem, in 2013.

After more than four decades of service to the Ottawa Jewish community, beloved Cantor David Aptowitzer Z”L leaves a legacy of kindness and caring as the community mourns his loss. Born in 1923 in Tarnopol, Poland, and the youngest of seven children, Aptowitzer died at the end of December in Israel.

Aptowitzer was the Cantor at Agudath Israel Congregation for 42 years prior to its amalgamation with Congregation Beth Shalom to form Kehillat Beth Israel (KBI). He remained closely connected to the Jewish community in Ottawa even into retirement, and after he made Aliyah. Those who knew him well spoke of his unstinting interest in congregation members — even in unusual circumstances.

“This morning at the breakfast table, in the Simcha room at KBI, the room we use for social events — it’s called the Aptowitzer room – there’s a lovely photo of Cantor Aptowitzer looking down, smiling down on us,” Victor Rabinovitch, KBI president, told the E-Bulletin last week.

“The conversation this morning just turned to the cantor and one of the fellows at the table told a wonderful story. Cantor Aptowitzer was in the Ottawa Hospital for a medical procedure and his phone rang … he was told about the death of someone else, at that moment in the hospital. He turned to his medical team and said ‘I’m sorry, I have to leave now. It’s more important that I see this family.’ And off he went. He later came back to check in again to have his own procedure done. The men around the breakfast table this morning said ‘Yes, that’s exactly like him’.”

It’s just one of many stories that speak to how Aptowizter put everyone else first.

“To describe him as beloved is underestimating how he was respected,” said Rabinovitch. “He approached every person and said ‘You can do that. You can do more than that. Let's try’.” This enthusiasm has led to KBI’s tremendous participation from its lay members in the daily and Shabbat service.

“He taught so many of the bar and bat mitzvah kids so well, and expanded the learning of so many adults, that now we have this special pride. I credit this to the Aptowitzer attitude — one of learning and doing and learning from your mistakes. Your Hebrew participation in the services does not end with being a bar or bat mitzvah, it continues. This is simply part of his legacy.”

Aptowitzer helped many families who converted to Judaism work their way through Jewish rituals and laws, ensuring they knew they were fully welcomed. As a mohel, he performed thousands of brises — following both ritual and his own rule of kindness.

“His whole approach was one of welcoming, rather than pushing or distancing, whatever the level of observance in the family,” said Rabinovitch. “He did this from a traditional outlook, in a way that helped to expand community, with a smile. I witnessed this several times when I attended a bris where he was the mohel. I was always deeply impressed by how welcoming but also how ritually careful it all was.”

Jeff Greenberg, a member of the KBI board of directors, knew Aptowitzer since childhood.

“He was my cantor,” said Greenberg. “Even in retirement.”

When Greenberg went to university in Toronto, he and Aptowitzer still stayed in touch.

“When I’d come home to visit family, I’d often also get together with the cantor and have a visit. It was really about nothing. He was always a mentor-type individual to me. I revered him, looked up to him,” said Greenberg. “As an adult, our friendship blossomed.”

In troubled times — like after Greenberg was hit by a car — Aptowitzer was there for him. At the time, Greenberg was wondering why he’d made it through the accident. The cantor told him: ‘For those who make good life choices, good things can happen to you,’ remembered Greenberg.

Ultimately, Cantor Aptowizter’s teachings of kindness will live long after he has.

“If I was to be asked what should be put on his footstone, it would be something that equalled ‘Genuinely kind’,” said Greenberg. “Not kind with agenda, or motives, or something else going on. Just genuinely kind.”