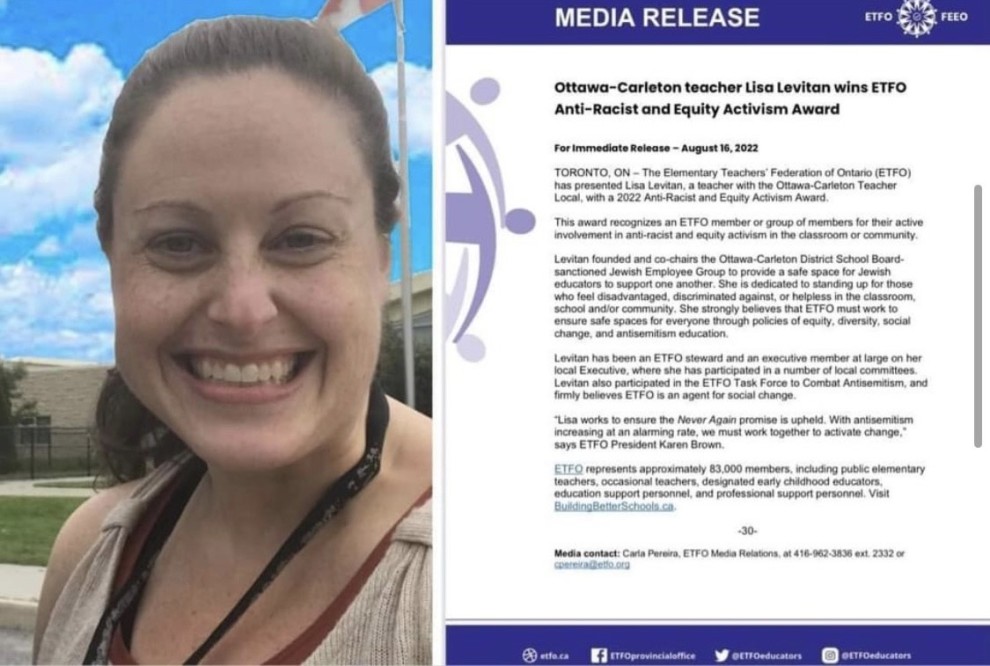 Jewish community member and teacher Lisa Levitan is the recipient of the 2022 Anti-Racist and Equity Activism Award from the Elementary Teachers’ Federation of Ontario, representing 85,000 Ontario Educators (ETFO).

This annual award recognizes an ETFO member or group of members for their active involvement in anti-racist and equity activism in the classroom or community. In the past year, Levitan has worked tirelessly to tackle the rise of antisemitism in the classroom.

“Since the war in May 2021, we've experienced an unprecedented and terrifying rise in antisemitism,” said Levitan. “Certainly any form of hate is unacceptable, but the fact that it’s happening in schools cannot be ignored.”

Last spring, Levitan received a call from a friend she hadn’t spoken to in years, who detailed troubles in her child’s classroom.

“While I was shocked, I was even more upset that I was unaware it was happening,” said Levitan. “The more I looked into it, I quickly realized that it was everywhere. With the increase of false narratives against Israel and Jews, antisemitism was being dismissed and ignored in schools.”

Levitan said the more people she spoke to, the more she heard the same thing over and over again: “Everyone thought they were the only one. They felt scared and alone so they stayed quiet and hidden.”

Realizing something needed to be done, Levitan was driven to act. She founded and co-chaired the Ottawa-Carleton District School Board-sanctioned Jewish Employee Group to provide a safe space for Jewish educators to support each other. After being voted in as a union executive, she also, at ETFO’s 2021 Annual Meeting, championed and passed an emergency motion to establish a task force to combat antisemitism in Ontario and recognize antisemitism as an unacceptable form of hate.

“This wasn’t an easy feat and unfortunately it came with much resistance and hate,” added Levitan. “I’ve had help from The Canadian Antisemitism Education Foundation, and now the Jewish Federation of Ottawa's (advocacy and antisemitism specialist) David Sachs. I would get three to four calls a day about incidents happening in schools. Now David can keep track and talk to the board, the principals … that’s helped a lot.”

She said one of the big questions she’s asking those in power at the board level is “When does free speech become hate speech?”

“Staff and students must receive mandatory PD on antisemitism, just as they've learned about other marginalized groups for so many years," says Levitan

"We need school boards to partner with the Federation and hire a Jewish Equity Coach to join the other equity coaches. It's imperative that we have an authentic lived-experienced Jewish voice providing accurate information” she added.

“While I don’t need awards or accolades, I'm cognizant that this award puts antisemitism on the map. Awareness and factual education are key to positive change,” Levitan said.

She said a major problem that remains is that school boards do not have an identifiable definition of antisemitism, and have not formally adopted the IHRA definition.

“If you can’t even define what antisemitism is, how can you educate the community about it?” she asks.

As part of Levitan’s activism, she’s organized an educational event hoping to reach more than 1,000 people this November, called RISE UP Ottawa!

“The goal of the event is to get our entire Jewish community together, inform them of what’s happened, and teach children how to stand up for themselves in a peaceful and safe way,” said Levitan. “The alarming amount of Jewish educators and students hiding their identity is unacceptable. I want people to know they’re not alone. If our whole community comes together, perhaps it won't be as scary. It's time to wake up because Never Again is NOW.”