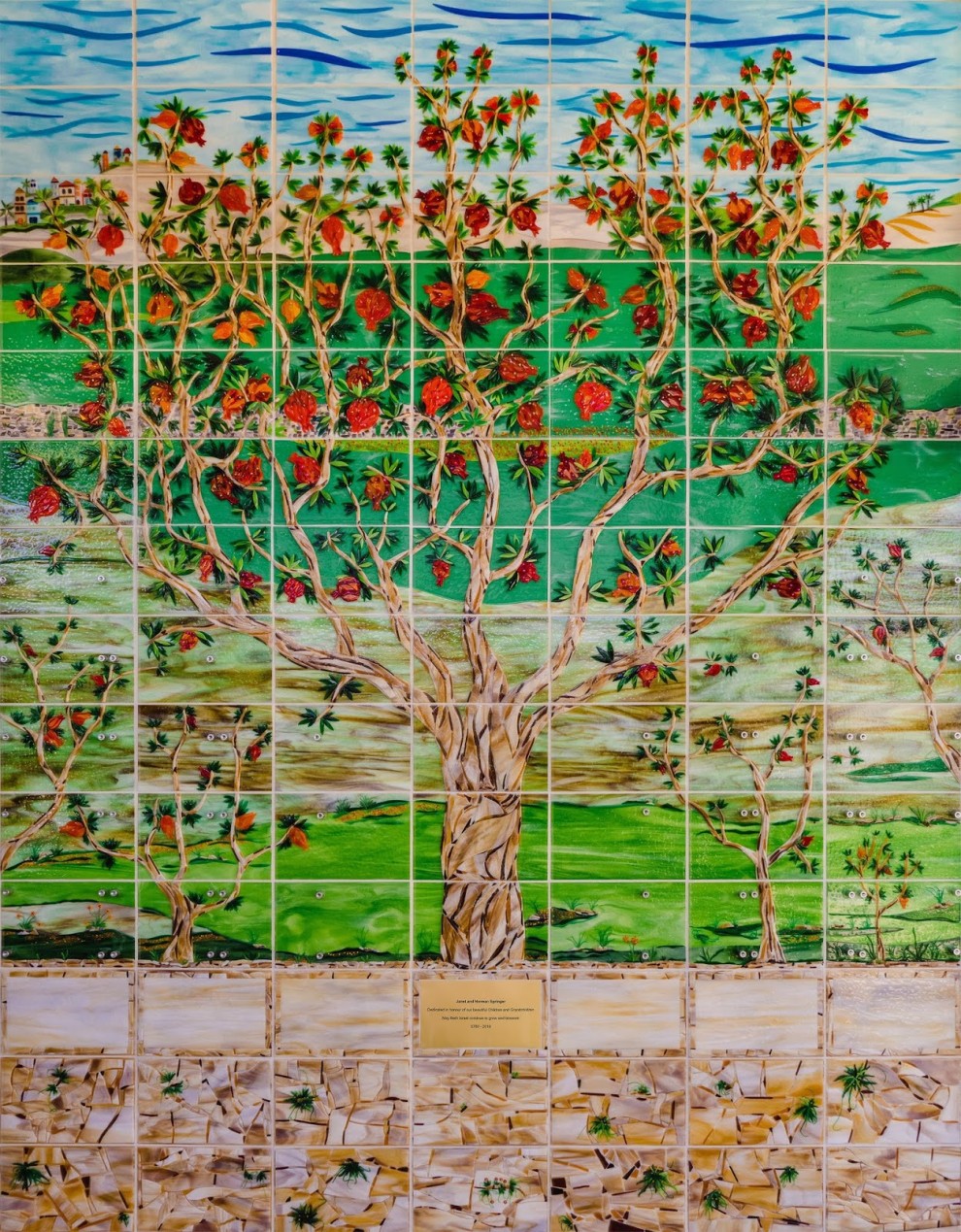 After more than a year of work by Ottawa-based artists Oded and Pamela Ravek, the glass art wall mural, “POMEGRANATE DREAMS Tree of Life,” was unveiled at Congregation Beth Israel in Kingston just before Rosh Hashanah.

The instillation at Kingston’s oldest synagogue measures nine feet by 12 feet and is the largest piece to date created by the Raveks. It is made of 97 individually designed, hand-cut and hand-crafted glass art panels and depicts three pomegranate trees, as well as “sun-kissed rolling Jerusalem stone, flowering meadows, and lyrical villages in the distant Judaean Hills.”

The Israeli-Canadian couple – who operate Ravek Architectural Glass Art – chose pomegranate trees as the focus of the mural because they are “synonymous with ancient Israel” and would “symbolize the strength and beauty of the community and the various people that make it up,” explained Oded.

Their passion for glass art began more than a decade ago as a “distraction that turned into a livelihood,” according to Oded, when they took a stained-glass course as a way to take their minds off of their daughter’s struggles with chronic pain.

The Raveks have since created and installed a wide array of glass artwork for a variety of clients, environments and spaces. Their “Memorial Light” sculpture – used annually to hold memorial candles at Yom HaShoah commemorations organized by the Shoah Committee of the Jewish Federation of Ottawa – is on display in the Greenberg Families Library at the Soloway Jewish Community Centre.

The Raveks met with the board of Congregation Beth Israel on several occasions to discuss the mural’s design before proceeding to work on it. Due to the mural’s scale, they said they had to experiment with different designs for the various aspects of it, including several for the pomegranates themselves.

When creating the mural, Oded said he focused on the “big picture” while Pamela added “a lot of symbolism from the Bible and other historical markers.”

Pamela said she also acted as a “devil’s advocate” when discussing design changes, such as adding two smaller trees and increasing the complexity of the village in the mural’s background.

As Pamela explained, the creation of the panels was a “time intensive” process that involved cutting glass pieces and layering them on top of each other, firing them in a kiln and then “laying them back like pieces of a puzzle.” The pieces of the mural were then installed row-by-row over the summer to be finished before the High Holidays.

At the wall mural’s reveal on September 28, the couple held a “meet the artist” session in the synagogue’s lobby, where they spoke to members about the symbolism of the mural and their creative process.

Pamela said the synagogue was “packed with people who were so happy this [mural] was for their synagogue. They can’t wait for families from different cities to come and see it.” She described the process of creating the mural as “intense, challenging, and fulfilling.”

Oded said the mural’s reveal was “uplifting and good for the spirit.” 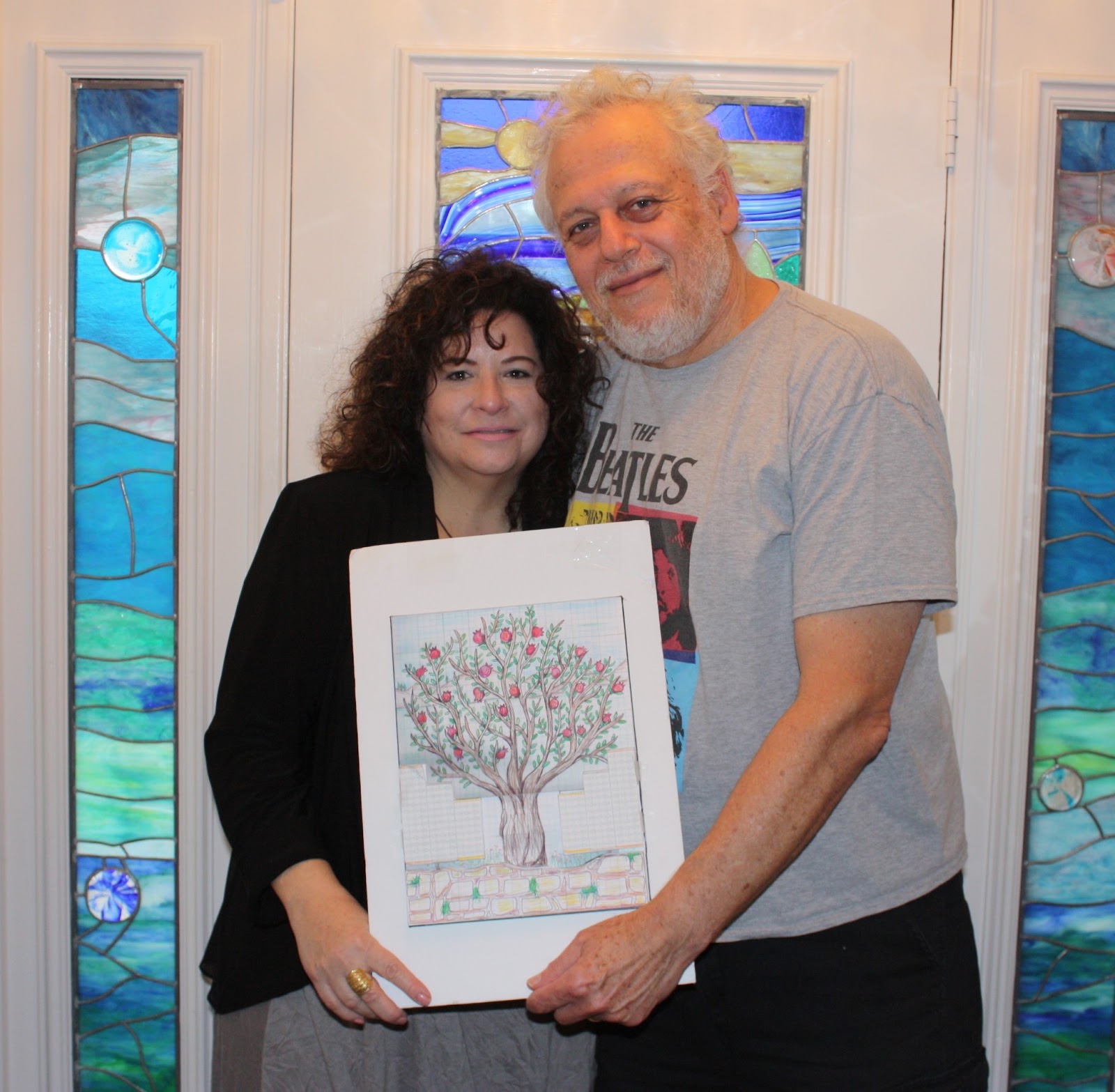 Pamela and Oded Ravek pose with a drawing of the original design for the glass art wall mural, “POMEGRANATE DREAMS Tree of Life.” (Matthew Horwood)

“So many people came up to Pam and myself and said they couldn’t believe the scope and the beauty of it. It was an amazing journey,” Oded said.