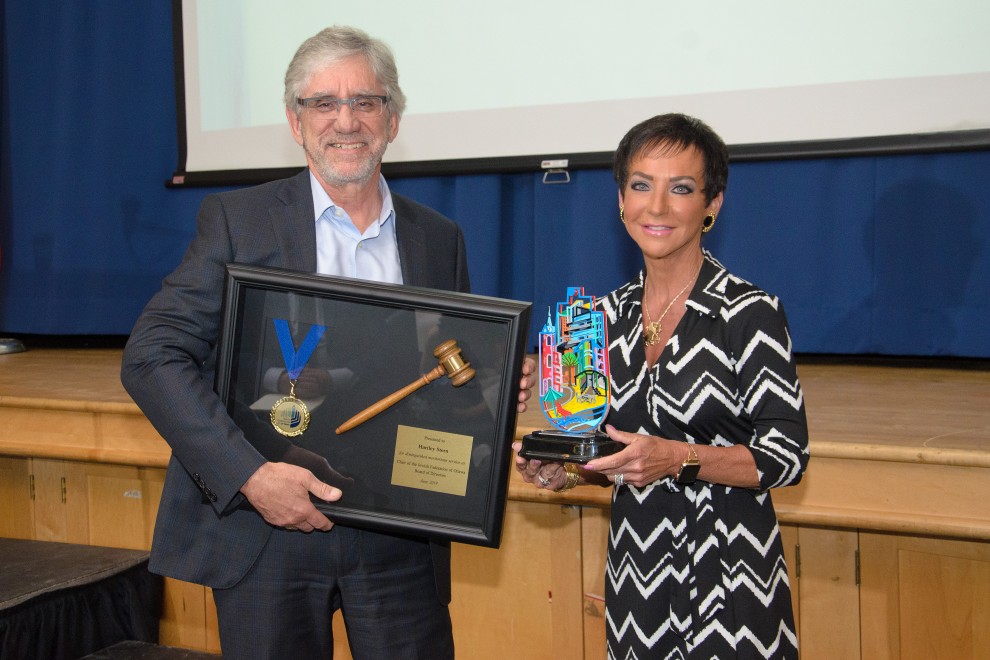 The communal leadership torch was passed at the 85th annual general meeting of the Jewish Federation of Ottawa, as Hartley Stern ended his two-year term as Federation chair and Michael Polowin began his.

“I thank you for the tremendous opportunity to have chaired the Federation. The added meaning to my life is greatly appreciated,” Stern said in his address at the AGM, held June 19 at the Soloway Jewish Community Centre.

Stern said that while governments do their best to “provide for the suffering and give environments we can live in safely and thrive in” there are still significant gaps, which Federation and its partner agencies work to fill.

Stern said helping the vulnerable and the aged, as well as ensuring every child can receive a Jewish education, are “major efforts this community has tackled and because we do it so well in Ottawa, I am quite comfortable and happy about the future.”

Stern said that while he couldn’t individually address every person who has helped him during his term as Federation chair, he gave special thanks to Tamir Executive Director Mark Palmer and Federation President and CEO Andrea Freedman.

Stern concluded his remarks by reminding the community, “individually and collectively,” of its power to do good work.

“You can continue to do the volunteering needed to ensure the agencies with whom you affiliate with continue to thrive. You can ensure every Jewish child in this community can get a Jewish education, that the future of Ottawa’s Jewish community is underwritten, and that we have resilience to deal with everything that comes our way,” he said.

Incoming Chair Michael Polowin thanked Stern for “his wisdom and leadership in his role as chair, and for all the hard work he has done over the past two years.” Polowin said he was excited to work with the Federation board.

During his remarks, Polowin spoke about growing up on Edgecliffe Avenue in the Carlington area, at the time a predominantly Jewish street. He encouraged Ottawa’s Jewish community to “transmit to our children the same values that were transmitted to us” and to rekindle the spirit of Edgecliffe Avenue.

[Editor’s note: Polowin wrote about growing up on Edgecliffe Avenue in the Federation Report column in the June 24 issue of the Ottawa Jewish Bulletin available at this link.]

Polowin also said Federation board members would be “more visible, in person and electronically,” and called for the continued strengthening and preservation of Jewish education.

Federation President and CEO Andrea Freedman said the 2019 Annual Campaign was “successful by any and all measures” with $1.1 million in new and increased gifts being raised.

Freedman highlighted two specific Federation initiatives she said are “adding value to the community and helping to build the Jewish Superhighway.”

The first is Jewish Experience Microgrants, a special fund which allows any individual or community organization to apply for a programming grant of up to $2,500 to bring more people to Jewish Superhighway.

The second initiative is Jewish Jumpstart, an incentive grant program meant to encourage Jewish individuals and families to join the Soloway Jewish Community Centre or “a synagogue of their choice.” Freedman said the program had already received over 50 applications.

Freedman also called for an endowment of tens of millions of dollars for sustainable Jewish education, saying it would be “challenging, but doable.”

“As excited as I am for everything that has already been accomplished, great things are yet to come as we continue to build the Jewish Superhighway, and our community as a whole benefits from the exceptional leadership of Michael Polowin,” she said.

The most eagerly anticipated part of the AGM was the presentation of the community service awards.

Steven Kimmel received the Gilbert Greenberg Distinguished Leadership Award. Presented every second year, it is the highest tribute the Ottawa Jewish community can bestow on an individual for exceptional leadership over many years.

In his acceptance speech, Kimmel, Federation chair from 2013 to 2015, said leaders should encourage and facilitate actions in others. “You can’t lead from the bleachers, you have to be on the field to lead,” he said.

Kimmel also spoke about the importance of “caring for the elderly, providing assistance for the vulnerable and ensuring our children have the opportunity to attend Jewish schools.”

The Shem Tov Community Volunteer Award, recognizing many years of dedication and service, was presented to Charles Schachnow.

Schachnow – the 1998 recipient of the Freiman Family Young Leadership Award – was recognized for his many years of volunteerism on behalf of such community organizations as Jewish Family Services, the Chevra Kadisha, Hillel Lodge, and Federation’s Annual Campaign, which he co-chaired.

Schachnow said volunteers are “the lifeblood of every organization” and his greatest life lessons have been learned through work in the community.

“I will cherish the Shem Tov Award always, as we continue to work together in making the world a better place,” Schachnow said.

Allan Shefrin received the Freiman Family Young Leadership Award, which recognizes someone under 40 who exemplifies exceptional leadership and service. Shefrin said it was “an honour” to receive the award, and he couldn’t have done it without his wife, Stephanie Levitz.

Shefrin said he hoped that by showing his children the importance of giving, they would be encouraged to “give back to the community they will inherit.”

“I firmly believe people can give time, money or both – they just need to be asked,” Shefrin said.

Shefrin also received the Lawrence Greenberg Young Leadership Development Award, which will allow him to attend the General Assembly of Jewish Federations of North America, where he will be recognized along with young leaders from other North American Jewish communities.

The Jewish Student Leadership Award, meant to recognize “a student pursuing a post-secondary degree who demonstrates leadership and outstanding commitment to the Ottawa Jewish community” was presented to University of Ottawa students Seth Kerzner and Tom Podolsky.