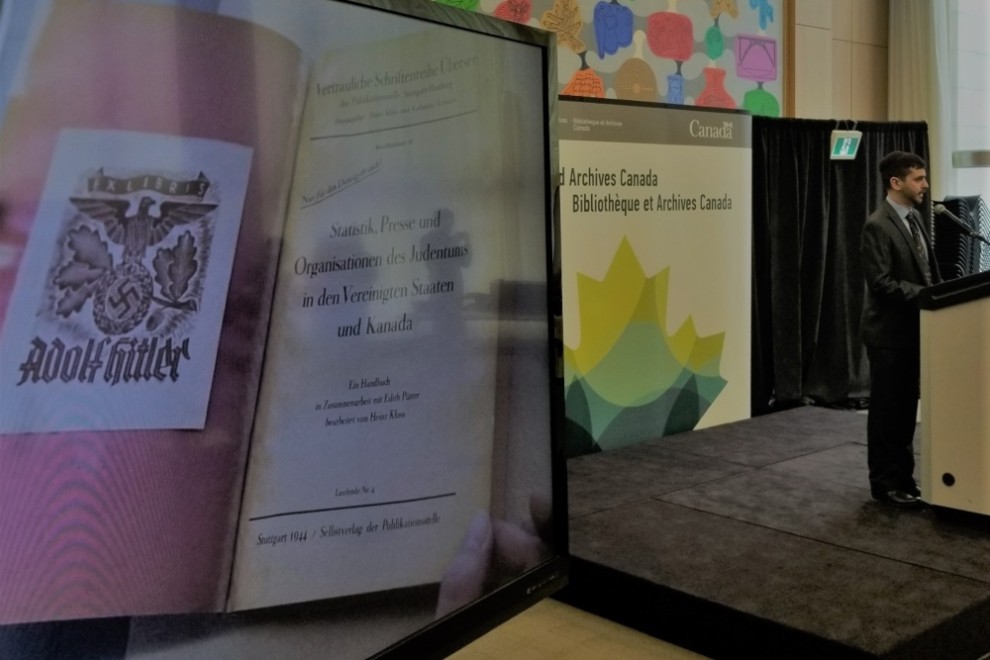 A rare 1944 book that hints at what could have happened to Jews in Canada and the United States had the Nazis prevailed in the Second World War – and that came from Adolf Hitler’s personal collection – has been acquired by Library and Archives Canada.

According to Library and Archives Canada, “The 137-page German language report, Statistik, Presse und Organisationen des Judentums in den Vereinigten Staaten und Kanada (Statistics, Media, and Organizations of Jewry in the United States and Canada), was compiled in 1944 by Heinz Kloss.

“The data contained within the book provides details on population statistics in certain cities,” including Ottawa, “as well as key organizations and presses of Canadian and American Jewish communities.

“This work hints at the story of what might have happened in Canada had the allies lost World War II. It also demonstrates that the Holocaust was not a purely European event, but rather an operation that was stopped before it reached North America. The book adds a great deal of insights worthy of reflection for Canada about World War II, and is an important tool to fight Holocaust denial.

“The bookplate bears a stylized eagle, swastika, and the words ‘EX LIBRIS ADOLF HITLER’ indicating it came from Hitler’s personal library.”Michael Kent, curator of the Jacob M. Lowry Collection at Library and Archives Canada unveiled the book at a press conference on January 23. Recognizing the controversial nature of the acquisition, Librarian and Archivist of Canada Guy Berthiaume explained,

“It is fundamental for a national institution like Library and Archives Canada – and other memory institutions around the world – to acquire, preserve and make available documents no matter how controversial or contentious they could be. It allows us to educate and to advocate for the most complete historical record possible. The truth of history is woven from many sources, and it is only when history is presented in its entirety that it can support the free exchange of ideas that lies at the heart of a democratic society.”

Rebecca Margolis, a professor in the Vered Jewish Canadian Studies program at the University of Ottawa and president of the Association for Canadian Jewish Studies, said the book was invaluable and “offers a documented confirmation of the fears felt so acutely and expressed by so many Canadian Jews during the Second World War: that the Nazis would land on our shores and with them, the annihilation of Jewish life here. While these fears may seem unfounded given the geographic distance of Nazi Europe to Canada, this handbook offering detailed statistics of Jewish populations across North America underlines their nightmarish potential.”Jewish advocacy organizations expressed support for the acquisition.

“This chilling document proves that the Nazis had terrifying global ambitions for the Holocaust. We are pleased that something of such important historical significance is in the hands of a responsible collection like Library and Archives Canada,” said Martin Sampson, vice-president for communications of the Centre for Israel and Jewish Affairs.

“We are particularly grateful to Michael Kent, Library and Archives curator of the Jacob M. Lowry Collection, for understanding just how significant this document is and for acquiring it. We will use it as a tool to combat one of the most insidious and preposterous forms of anti-Semitism: Holocaust denial,” added Sampson.“This finding already sheds important new information about Hitler’s objective to conquer America and Canada and initiate wide-scale genocide against its Jewish inhabitants and others.

For researchers, educators and scholars alike, this information will transform the way we think about the Holocaust and neo-Nazis and white supremacists who live within our midst today,” said Avi Benlolo, president and CEO of Friends of Simon Wiesenthal Centre.

The book was scheduled to be displayed at the International Holocaust Remembrance Day observance at Library and Archives Canada on January 27. As the event was taking place after this issue of the Ottawa Jewish Bulletin went to press, we will have a report in the February 18 edition.