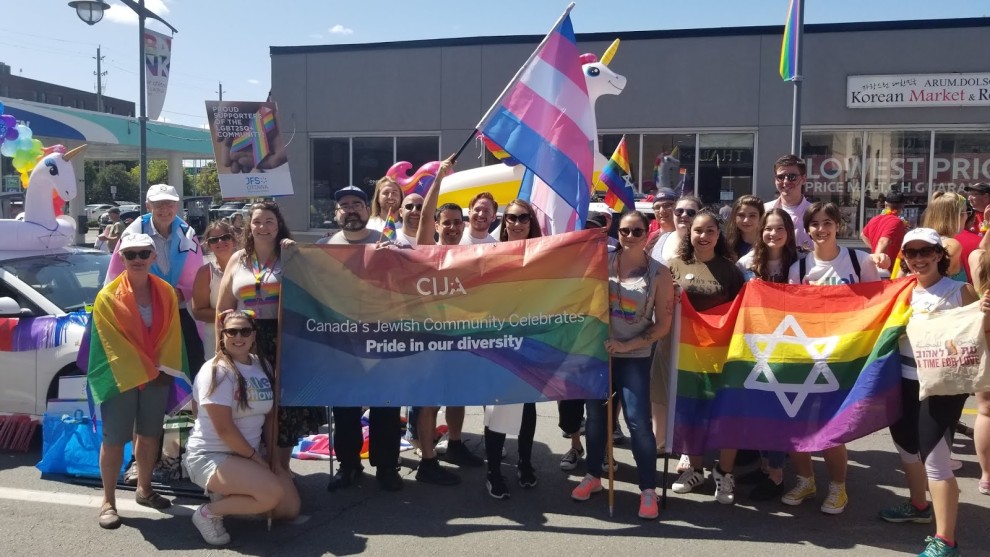 An enthusiastic delegation of people from the Jewish community marched in this year’s Capital Pride Parade in Ottawa on August 25. Marchers included representatives from the Jewish Federation of Ottawa, the Centre for Israel and Jewish Affairs (CIJA), Hillel Ottawa, Jewish Family Services of Ottawa, Kehillat Beth Israel, Temple Israel, and Or Haneshamah.

The parade was the culmination of the week-long Capital Pride Festival, which included more than 60 events held across the region.

Jess Burke, who staffs CIJA’s LGBTQ2+ Advisory Council, said the August 23 Shabbat dinner was attended by 170 people, which made it the largest Pride Shabbat dinner since CIJA first began hosting the dinner three years ago.

CIJA received a grant from Federation’s Jewish Experience Microgrants program to support the dinner, as well as a tailgate party that took place before the Pride Parade began.

“We are very grateful to the Federation Microgrant program for their continued support on meaningful, engaging community programs,” Burke said.

Burke was also enthusiastic about community participation in Capital Pride.

“Through this channel and our strong community partnerships with the Jewish Federation of Ottawa, Temple Israel, Kehillat Beth Israel, Or Haneshamah and Hillel, we were able to mobilize a large marching contingent of both LGBTQ2+ Jewish community members and allies,” she said.

Dara Lithwick, a member of CIJA’s LGBTQ2+ Advisory Board, is a long-time supporter of Pride, having come out more than 20 years ago with the “instrumental support” of her rabbi.

Lithwick said her role with CIJA involves advocating for inclusivity, as well as working with local Prides to ensure that “Jewish spaces are queer friendly, and queer spaces are Jewish friendly.”

Lithwick said in the future, she would like to see broad participation from all the major congregations and Jewish organizations in Ottawa.

“I think there has been a wonderful evolution over the past 15 to 20 years, and it’s only going to get better. We are all created in God’s image and we have a duty to both love our neighbour, and also love and care for the stranger,” Lithwick said.

Miriam Izbinsky, who marched in the Pride Parade for a second year in a row, said she attended to support her Jewish friends in the LGBTQ community.

“I love coming out here and supporting them as much as I can. People who are Jewish and are a part of the Pride community need to be supported as much as possible,” she said.

This year’s Jewish Pride delegation included a homemade float: a car decorated with balloons and streamers, and topped with a giant inflatable unicorn. The car’s owner, Sasha Kathron, Jewish student life coordinator at Hillel Ottawa, said she was “honoured” to march in the parade as an ally of the LGBTQ community.

“Times are changing and I think we are moving in the right direction. I think we need to lead by example and lead with love, not hate,” Kathron said.

Jewish Federation of Ottawa President and CEO Andrea Freedman said she makes a point of attending Pride every year because she believes it’s important for Jewish leaders in Ottawa to be allies to the LGBTQ community.

“Seeing Ottawa come together to have community groups and businesses marching – as well as families bringing their kids – was fantastic,” Freedman said.

“It’s such a remarkable message of inclusiveness and care for our fellow citizens.”