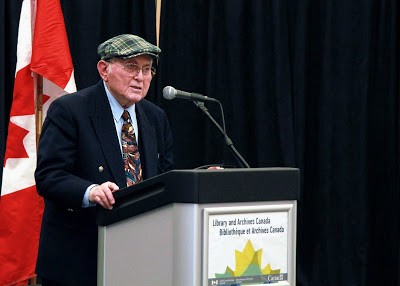 In 2005, the United Nations designated the anniversary of the January 27, 1945 liberation of Auschwitz, the Nazis’ largest death camp, as the annual International Holocaust Remembrance Day.

In Ottawa, about 300 people gathered at Library and Archives Canada, January 27, to mark International Holocaust Remembrance Day and the 75th anniversary of the liberation of Auschwitz at an event organized by Library and Archives Canada, the Centre for Jewish and International Affairs (CIJA), the Jewish Federation of Ottawa, and the Centre for Holocaust Education and Scholarship at Carleton University.

Recalling his boyhood as the Second World War broke out, Gutter told a story of living in the Warsaw ghetto before he was deported to the Majdanek death camp in 1943.

“By the end of 1941, the ghetto could only be described as an apocalyptic hell,” said Gutter.

But he distinctly remembers one moment of pleasure in which, while running through the open, nearly destroyed buildings of the ghetto, he found a book. This book had no cover, but at the top of one of the pages was the name “Scarlett O’Hara.”

“I read it avidly over and over again,” said Gutter. “It was only after the war when I saw a movie that I learned the book I had read was Gone with the Wind. Much later, the irony struck me. My world and much else had gone with the wind.”

This memory would set the tone for the rest of the evening.

In 1943, the Gutters were deported to Majdanek, where all except for Pinchas were murdered upon arrival.

Choked up with emotion, Gutter reminded the audience how easy it is for memories to fade into nothing.

“For some reason my brain has shut out all memory of my sister,” said Gutter of his twin, Sabina, whose long blond hair was tied back the day she was murdered. “And I can’t remember anything except that braid. That’s all I remember.”

After avoiding constant selections and escaping his would-be death with the help of an ally, Gutter was liberated by the Soviet army on May 8, 1945.

For 60 years, Gutter shared very little of his story. But since 2005, he has taken part in the March of the Living multiple times, given speeches, and was the subject of a film, “The Last Goodbye,” which was dedicated to the memory of his twin sister.

He has also offered his form and memory to a hologram so that he will continue to teach as a witness to the Holocaust after his passing. Gutter says it is important for people to learn directly from witnesses but notes “the survivors will not live forever.”

He hopes that technology will be the way to maintain the personal connection to the past and continue to educate everyone about the Holocaust for even longer than humanly possible.

“If the Holocaust is to have any positive value at all, it’s in its role of Holocaust education,” said Gutter. “If you and I draw value from the lessons of the Holocaust, that’s one of the best means of defence, I believe, against the difficult, often dangerous world that we are living in at the moment.”

Gutter ended his presentation saying, “Regardless of the difficulties, we must never cease to attempt to restore the world to a better health and try to light the path to a better future.”

During his opening remarks, Robert McIntosh, director general (Archives) at Library and Archives Canada, said that acknowledging and remembering the Holocaust is crucial to the future.

“We believe that preserving the memory of and educating about the Holocaust is essential to the mission of ‘Never Again,’” said McIntosh. “Only by learning from past human travesties can we expect to develop as a free and democratic society.”

In his closing remarks, Martin Sampson, vice-president (communications) of CIJA, echoed that sentiment.

“One of the things that links us is the deeply held belief that antisemitism is not just a Jewish problem,” said Sampson. “Antisemitism infects and destroys societies… [and] we have to fight it at every opportunity.”

As the event ended, attendees stood together to participate in the International Holocaust Remembrance Day social media campaign and held up signs with the hashtag #WeRemember. 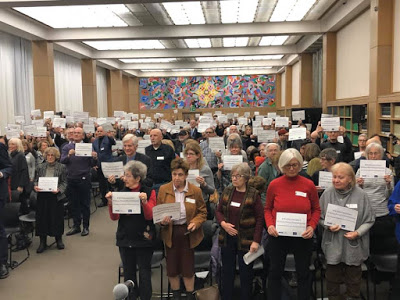