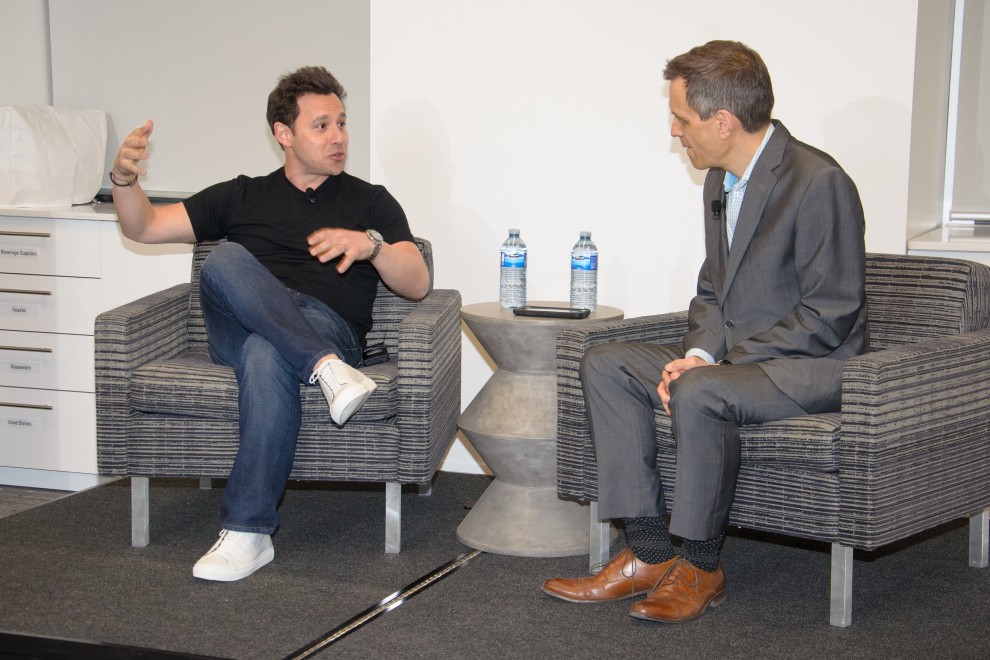 As a student, Shopify’s COO pledged to help rabbi build a synagogue, if he ever had the money.

The event, May 6 at the Ottawa offices of Gowling WLG, featured an interview with Finkelstein conducted by broadcaster and writer Mark Sutcliffe. Finkelstein discussed how he came to work at Shopify, how the e-commerce company is assisting entrepreneurs, and his involvement in Ottawa’s Jewish community.

At 17, while attending McGill University in Montreal, Finkelstein founded a T-shirt company. Selling T-shirts, he said, made him fall in love with entrepreneurship, and gave him the “confidence and swagger to say, ‘hey, maybe I am an entrepreneur.’”

In 2005, Finkelstein moved to Ottawa to study law at the University of Ottawa, where he was soon befriended by Rabbi Chaim Boyarsky, director of the Chabad Student Network.

One night, while having dinner at Rabbi Boyarsky’s home, Finkelstein said he would like to help the rabbi build a synagogue in Ottawa, if he ever had enough money.

“About a year ago, I called Rabbi Chaim and said, ‘I can’t believe this, but I’m ready to build this synagogue with you,’” Finkelstein recalled.

The Finkelstein Chabad Jewish Centre, located at 254 Friel Street, includes a synagogue, library, commercial kitchen, student lounge, and guest suites. Finkelstein says the centre is packed with students “every day of the week.”

“Some of them are there because they’re learning about Judaism. Some are studying Torah, and some are just hanging out. It’s really become a community centre for Jewish students in Ottawa,” he said.

Building the synagogue with Rabbi Boyarsky is “probably the thing I’m most proud of in my entire life,” said Finkelstein.

In 2009, having completed a law degree and MBA at uOttawa, Finkelstein met with Shopify co-founder and CEO Tobias Lütke to discuss opportunities at the e-commerce company. Finkelstein was soon appointed Shopify’s chief operating officer.

Finkelstein said he was drawn to Shopify because, “in the same way I loved entrepreneurship for being such a meritocracy, I thought Shopify was this place where anyone with an idea could build an online store.”

According to Finkelstein, Shopify allows people to “build a global business for 29 dollars,” but it is also “bending the learning curve for entrepreneurs.”

One of Shopify’s chief advantages is being headquartered in Ottawa, according to Finkelstein, because the city has “more access to talent than anywhere else I’ve encountered, and a loyalty from the people living here as well.”

Finkelstein said he hopes Shopify has helped Ottawa to become a better community.

“I think Shopify’s team contributes to the community in a way that doesn’t feel lavish, but in a way that feels incredibly productive,” he said.

“If you walk into [Shopify’s] garage you don’t see Lamborghinis and Ferraris. What you see is new restaurants and ice cream shops popping up in Ottawa,” Finkelstein said.

“I think we are one of the most underrated places on the planet. I will proudly spend the rest of my life in Ottawa,” Finkelstein told the large audience.

“I think Ottawa is doing so many cool things, but we struggle to tell people. I’m not saying we need to be like Toronto or Los Angeles, but we should be a little bit more confident and have more pride in how great we are.”

Asked by Sutcliffe where he will be turning his philanthropic attention to next, Finkelstein said he and his wife, Lindsay, care about initiatives involving mental health, the Jewish community and entrepreneurship.