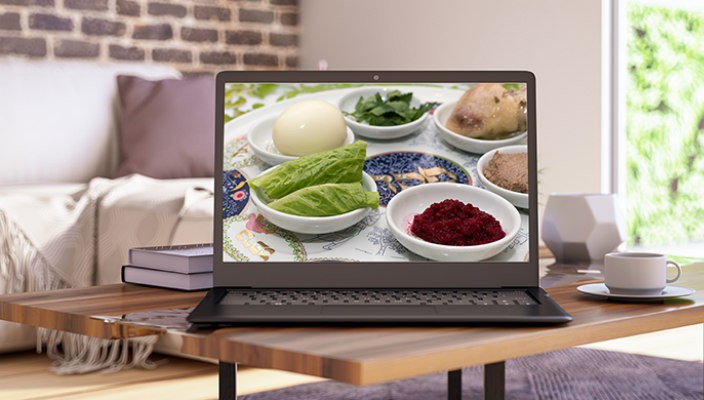 Yudit Timbo spent most of 2020 watching her friends postpone their weddings -- something she never wanted to have to do.

So, when her fiancé proposed in November, Timbo knew they just had to go for it, eventually getting married in a special online ceremony with Congregation Machzikei Hadas at the end of January 2021.

“We were kind of like, we want to start our lives,” said Timbo. “So, we set a date, and planned to have our simcha online.”

The couple used an online software rather than a video teleconference program to “keep the focus on us,” said Timbo. Guests could write notes that only the couple could see, which they then turned into a guest book.

“Guests loved it. We had people from the U.K., from Israel -- all over the world. We probably wouldn’t have been able to have as many people at a physical wedding.”

With a lot of friends who weren’t Jewish, being virtual ceremony meant Rabbi Idan Scher of Machzikei Hadas could take time to explain each of the religious processes. A synagogue staff person handled all the tech needs of the software, so Timbo and her fiancé could enjoy themselves and focus on each other.

“It wasn’t what I envisioned initially, but it turned into a really special day.”

Official statistics from 2020 show that the number of organizations running virtual events more than doubled across the world, from workplace lunch and learns, and industry-related conferences, to family gatherings and holiday celebrations. And of course, so many of people use virtual meeting platforms during the workday -- after just a few weeks of pandemic lockdowns last March, the use of Zoom had hit more than 200 million daily participants in meetings, compared to 10 million daily at the end of December 2019.

Like Timbo acknowledged, virtual celebrations became the norm. For people like Timbo, going virtual could be the initial plan -- but for people like Sherri Katz, it was a pivot decision.

“We had planned a very different celebration,” said Katz, whose daughter’s Bat Mitzvah in June had to move online with the support of Temple Israel.

At the time, there was no other option -- COVID-19 restrictions meant only five people could be together inside, and with elderly parents it wasn’t worth it to Katz.

“Everybody, including grandparents from Montreal, Toronto and Florida, joined us on Zoom. We had 200 people attend from all over,” said Katz. They would have expected just more than 100 people in person under normal circumstances.

“We did the best we could under the circumstances,” said Katz. “We had planned and re-planned … once we decided to go virtual, it was like all the stress was relieved.”

Katz said they mostly made it up as they went, using tips and tidbits from Facebook groups where others had done similar events.

And as we hit the one-year mark of lockdowns across the world -- and the second mostly virtual Passover season -- Rabbi Daniel Mikelberg from Temple Israel considers it a “milestone.”

Last year. Temple Israel held an online Passover seder leading the congregation through the Haggadah in a 45-minute service, that ended with members partaking in their Passover meals and do the closing rituals on their own. More than 80 people joined from their homes.

“We were overwhelmed by the response,” said Rabbi Mikelberg. “But even in such a time of disconnect we were able to connect -- and we were novices back then!”

This year, things are different -- and in a sense, a bit sad.

“This is not where we thought we’d be a year later,” said Mikelberg. “We thought we would be able to put our screens away -- but we’re in a different place in terms of skill set and preparedness now too.”

Passover for the Temple Israel congregation will look a bit different this year. On the first night they’re planning a family-friendly fun evening where people can expect to get out of their chairs, build with blocks and dance “across the sea of reeds.”

On a second evening, Mikelberg has organized a seder “hop.”

“Passover is a great example of a holiday where different families have their own customs,” said Mikelberg. “So, for each element of the seders we’ll be going on a virtual tour on Zoom, accompanying families as they bring light to Passover in their own unique ways.

From religious celebrations to weddings and mitzvahs, the community has shown time and time again their resourcefulness and flexibility when it comes to virtual evens.

“We’re all about acknowledging the needs of the 21st century,” said Rabbi Mikelberg. “While also grounding ourselves in the Torah.”

Prior to Passover, the Jewish Federation of Ottawa will be sharing an online listing of community events. Stay tuned for more details.