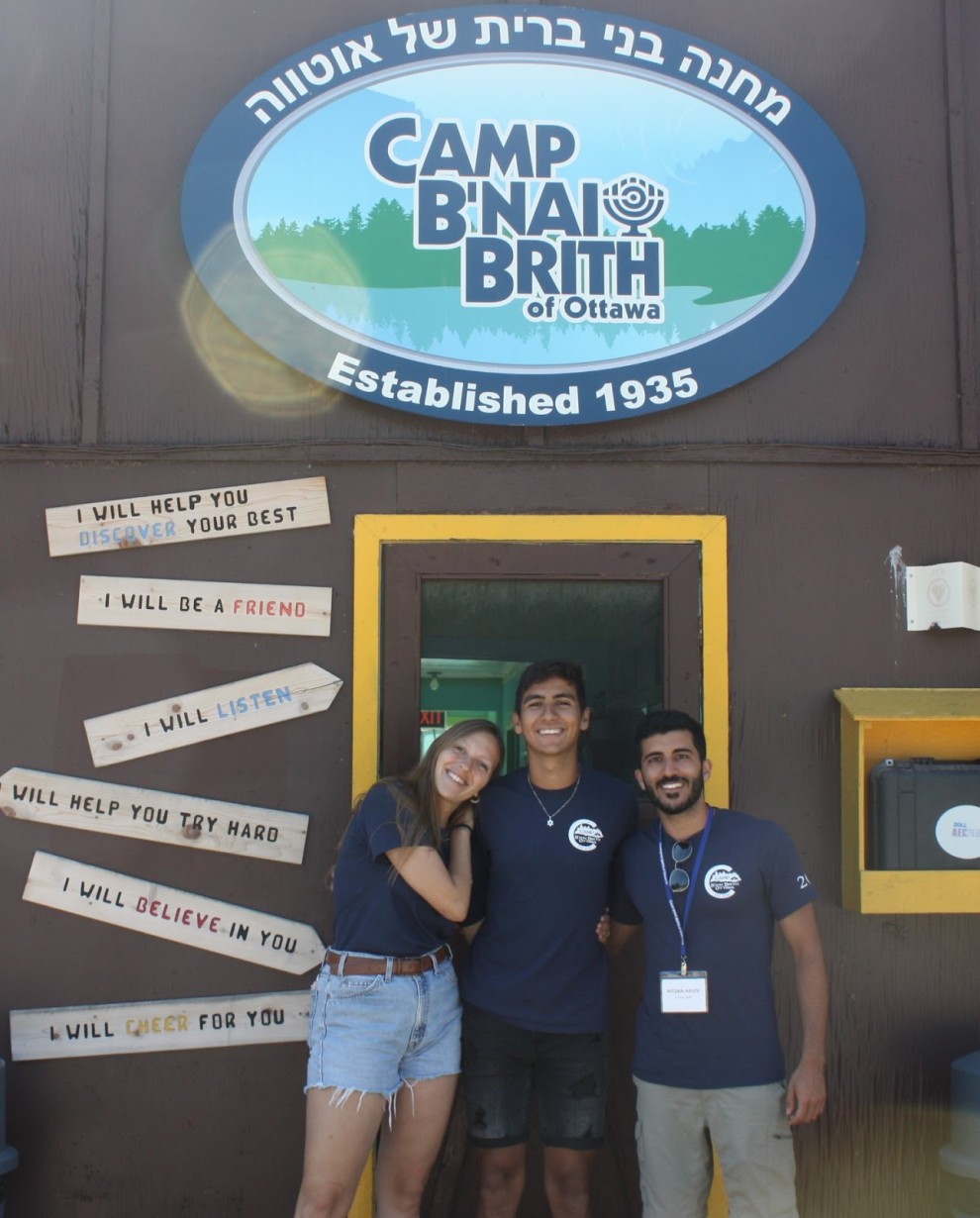 A record number of young Israelis are working as counsellors this summer at Camp B’nai Brith of Ottawa. Bulletin reporter Matthew Horwood visited the camp and spoke with three of them.

There is a distinctly Israeli flavour to Camp B’nai Brith of Ottawa (CBB) this summer as campers interact daily with 17 Israeli counsellors – the largest ever group of Israeli counsellors at CBB. Iris Fainberg, who hails from Jerusalem, said for many campers the presence of Israelis at CBB “is in and of itself an association with what Israel is.”

“I find it so interesting to be that person who can be a bridge to Judaism and Israel, even for something like translating a prayer,” Fainberg said. “Kids sometimes say [Hebrew] words and have no idea what they mean, but being able to explain them is an amazing thing.”

Nitzan Haviv, from Bat Yam, said the Israeli counsellors are being given “the opportunity to empower connections between Israel and the Jewish community, and for the next generation of the community.”

Liam Afota, from Nesher, who is at CBB completing his year of service as one of the Jewish Federation of Ottawa’s shinshinim, said “the fact I am here sharing my experiences makes the campers feel more connected to Israel. They will remember the Israeli counsellors they had.” Afota’s shinshinim partner, Inbar Haimovich, is also at CBB as a dance specialist and counsellor.

CBB has numerous programs and activities, including athletics, waterfront and arts. Fainberg said there are activities that would appeal to any type of child. “Whether the child is artistic or sporty, shy or outgoing, this is their opportunity to try new things and to shine,” she said.

Haviv said for him, it is “really important that my campers try new things.” Some of the camp’s activities and events relate specifically to Judaism and Israel. For example, on Fridays, the campers come to Shabbat dinner “in beautiful white clothing,” said Fainberg.

On Saturdays, the Israeli counsellors host Shabbat programs to help campers learn about different aspects of Israel, including culture, food, and games, according to Afota.

Asked about some of the notable interactions the Israeli counsellors have had with campers, Fainberg recalled a “special moment” during an activity when the kids were asked to write about or draw things they associated with home. Fainberg said many of the kids wrote down “Israel,” despite none of them having lived there.

“That was very powerful to see,” she said. Afota said that for him, it is the “small moments that make our impact much bigger,” such as bonding with the campers during activities and while waiting in lines for events or meals.

“They ask questions about what I will be doing in the Israeli army, about Hebrew and blessings, and about the differences between our two countries,” Afota said.

Haviv said he enjoyed teaching the campers Hebrew words and then witnessing them have competitions on who could pronounce them better. “It can be very funny, and is a lot of fun,” he said.

Fainberg said CBB is a place where “it’s cool to be Jewish,” where the campers can talk about Judaism without feeling self-conscious. “It feels so oddly natural. This little place felt like home for me within a day. It is exhausting work, but really fun,” she said.

Haviv said it was his “pleasure” to have been picked to come to CBB. Afota said that in a generation where many kids are addicted to cellphones and computer screens,

CBB allows them to “have personal connections to each other and just have fun.” Cell phones, he added, are off limits at camp. CBB Director Cindy Benedek said the camp recruits counsellors from Israel to help ensure the kids get “a real connection to Israel, as opposed to just talking about it or doing programing.”

Benedek said the camp has “always had some form of an Israeli delegation,” but in past 10 years they have been working with Jewish Agency for Israel, to get “direct hires, instead of going through an organization.”

Benedek said CBB would typically receive three to six Israeli staff. But this year, with shinshinim from Ottawa and Toronto, and others recruited via Jewish Agency, CBB is enjoying its largest ever delegation of Israelis at 17.

Benedek said having camp staff from Israel allows the children to “make real life connections and hear how Israel is the same but different” as well as “see Israel as a part of who we are as Jewish people.”