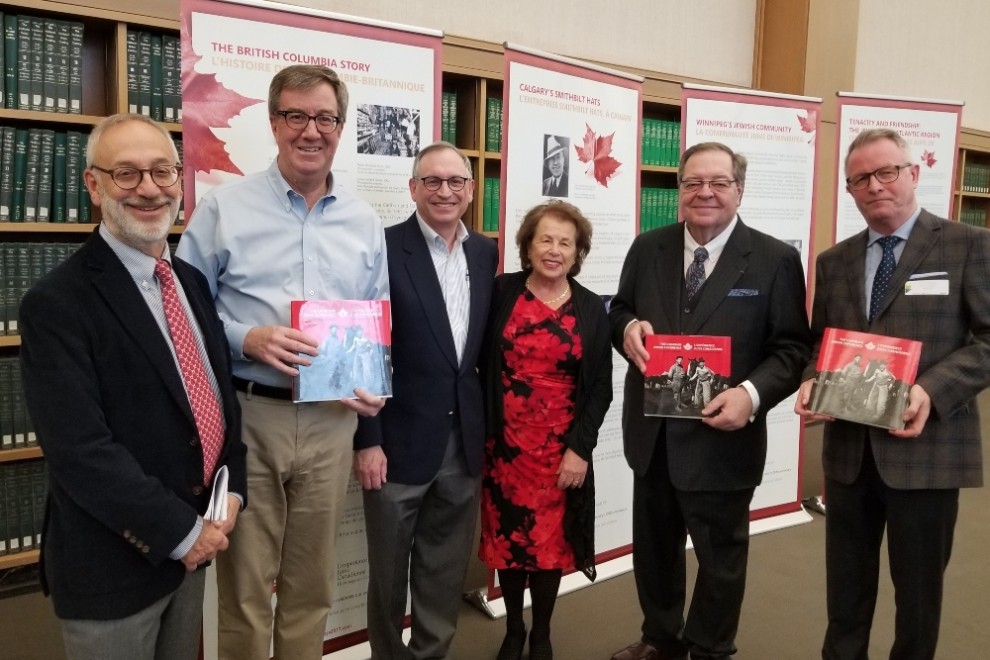 A book launch for The Canadian Jewish Experience: A Celebration of Canada was held December 16 at Library and Archives Canada.The book, compiled by CJE organizer Tova Lynch and her husband, former diplomat Jim Lynch, is based on the panel exhibition, “The Canadian Jewish Experience: A Tribute to Canada” (CJE), which was created for Canada 150 – the year-long celebration of the country’s sesquicentennial in 2017 – as a way to celebrate the country and the many contributions of its Jewish citizens.The book includes all 15 informative CJE panels, as well as a history of the exhibition and the challenges associated with its creation.

The CJE team originally envisioned a large, permanent exhibit in downtown Ottawa including artifacts and storyboards. However, the team was unable to raise enough funds for the project, and their application for funding from the Department of Canadian Heritage was turned down.Tova Lynch said the team was “obviously very disappointed” by this news. “Our next step was to make something happen, so we did a smaller version of the project that actually mushroomed into this book.”

The CJE team was able to secure receive funding and support from individuals, foundations and organizations and mounted a multi-panel exhibit, which combined “photos, informative text, solid research and good design” as well as a website to allow anyone in the world to access the content. www.cje2017.comThe CJE’s 25 exhibit sets were displayed at 73 different locations in 2017, including five provincial legislatures, seven city halls, 28 universities, four city libraries, more than 10 synagogues and seven secondary and grade schools.

The exhibits were also displayed on Parliament Hill four times, and at Canadian diplomatic venues in the U.S. and Israel. Overall, an estimated 35,000 people viewed the exhibits.At the book launch, Tova Lynch said if somebody had told her 21 months ago that a book about the CJE would be published, “I would have wondered what they had for breakfast that day.”

Tova Lynch described the book as a “meaningful anniversary gift” between her and Jim Lynch, as the pair celebrated their 40th anniversary in May 2018. “This project would not have been possible if not for Jim’s steady advice and suggestions,” she said.Ottawa Mayor Jim Watson spoke at the book launch and praised Tova Lynch for her “dedication, passion and commitment.” Watson said the CJE was a “beautiful tribute to the Jewish community throughout Canada.”

Watson attended the CJE exhibition when it first opened at 30 Metcalfe Street on April 2, 2017, and offered for it to be displayed in the lobby of Ottawa City Hall.“All Canadians benefit from efforts like this one, which demonstrate pride in Canada and reaffirms the inclusive sense of national identity that makes Canada a beacon of hope and tolerance,” he said.

CJE board member Victor Rabinovitch said the launch of the book “adds a new element to this body of knowledge about Jews in Canada and describes the amazing number of locations where the exhibition was displayed.”Rabinovitch, former CEO of the Canadian Museum of Civilization, said they chose to celebrate Canada’s 150th birthday because “we believe, as Jews and as Canadians, that we have many reasons to be proud.

“When I look at the Canada of today, and when the CJE describes the Canada of today, we see a country that is continuing to grow in its social and emotional maturity. It’s a country that faces up to its problems and to its shortcomings,” Rabinovitch said.However, Rabinovitch warned the audience against being “blindly happy,” and said the country will be tested once again in unpredictable ways.

“How will we respond? What will we learn from Canada’s history? Will we work to find answers rooted in fairness, kindness and rule of law? The answers remain to be seen,” he said.Jim Lynch ended the book launch by reading a letter from Darrel Gurevitch, whose father Curly Gurevitch – a Russian immigrant to Calgary – is on the cover of the book. Gurevitch said his father was the “right personality” to be on the cover, as he “lived the Canadian Jewish experience and was proud of it.”

The Canadian Jewish Experience: A Celebration of Canada can be ordered online at www.chapters.indigo.ca.