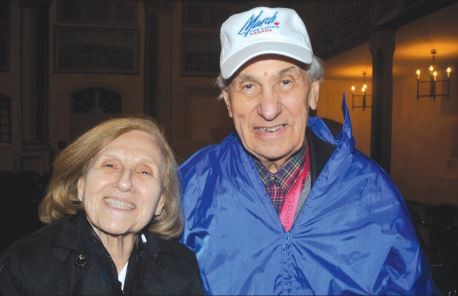 A campaign, part of a city-wide effort to combat antisemitism and hate, has been launched to rename Tilbury Park, located in the Kitchissippi neighbourhood, after David Shentow, one of Ottawa’s most renowned and respected Holocaust survivors. Shentow, who died in 2017, was born in Poland and ultimately survived slave labour, Auschwitz, death marches, and Dachau. He was liberated on his 20th birthday in 1945.

Shentow participated for many years with March of the Living (MOL), an annual educational program that brings students from around the world to Poland, where they explore the remnants of the Holocaust. Shentow accompanied the students on several trips providing a powerful first-hand narrative as a Holocaust survivor.

“In 1996, I chaired my first March of the Living for Ottawa,” said Debbie Halton-Weiss. “As I knew David a little bit, I asked him to come to one of our first sessions with the kids.”

Halton-Weiss planned for Shentow to speak for one hour at that first event. When the time ran out, she began to end the session, but the students wanted more.

“I was like ‘I’m sorry, maybe we can continue another time,’ and the kids said ‘no, please! We have so many more questions to ask’,” remembered Halton-Weiss. “They stayed; they were hooked. They were truly committed to understanding their journey to Poland and Israel. It wasn’t for their own education … They were standing there as Jews representing all who had survived. It gave them this new understanding and meaning of what they were partaking in.”

When Halton-Weiss chaired the March again in 1998, Shentow was the first person she approached.

“I never travelled with him on the March, but he would come to me, sometimes in a humorous way, maybe blaming me a little bit for getting him hooked,” said Halton-Weiss. “He’d say I can’t do it again, it’s too much. But he couldn’t say no.”

In 2010, when Benita Siemiatycki took on chairing the MOL, other participants convinced Shentow to go on one last trip with the students. Even after he stopped travelling, Shentow remained a speaker at the information sessions held for the youth before the trip.

“I saw in his presentation to the kids the rapport that he would build with young people. He had a warmth to him that was very genuine. It wasn’t an act. He just had a knack for bringing people closer to him,” said Siemiatycki. “He had a love for young people … I think he saw in them the potential they had to change the world into something better than the world he came from.”

Lauren Weiss was a youth participant on Shentow’s last trip. Then 17, she described it as a powerful experience. Especially memorable was Shentow’s storytelling throughout the trip.

“With him being from Ottawa and us being a smaller group, we got the chance to really get to know him … I remember even before the flight, he was sitting us down and telling us stories. He really set the stage and made it such a different experience,” said Weiss. “It kept us grounded and made sure that we were always learning and listening, which is what the trip is meant to be about.”

Weiss said what made Shentow special was his message of hope that we should have in humanity.

“He had such a positive outlook and lived such a full life in spite of all the things he went through,” said Weiss. “Coming back, I just had this profound appreciation for all of the things that I had.”

Although he was profoundly humble, Halton-Weiss said Shentow would “be smiling from ear to ear,” at the prospect of having a park named in his honour.

“Whenever he got attention, he just tried to deflect,” said Halton-Weiss. “I would look forward to visiting that park. I think going there, having known that he walked through the greenery of death … it would be such a fitting commemoration, such a way for me and many others, who walked through Auschwitz with him, to sit in a park and bring back those memories.”

Siemiatycki agreed, adding that “any information and education that informs the community about the horrors of the Holocaust and the destruction that it brought is always positive, in the sense that you hope (the knowledge) would prevent hatred in the future.”

Written comments regarding the proposal to rename the park can be submitted until March 10. Visit here.