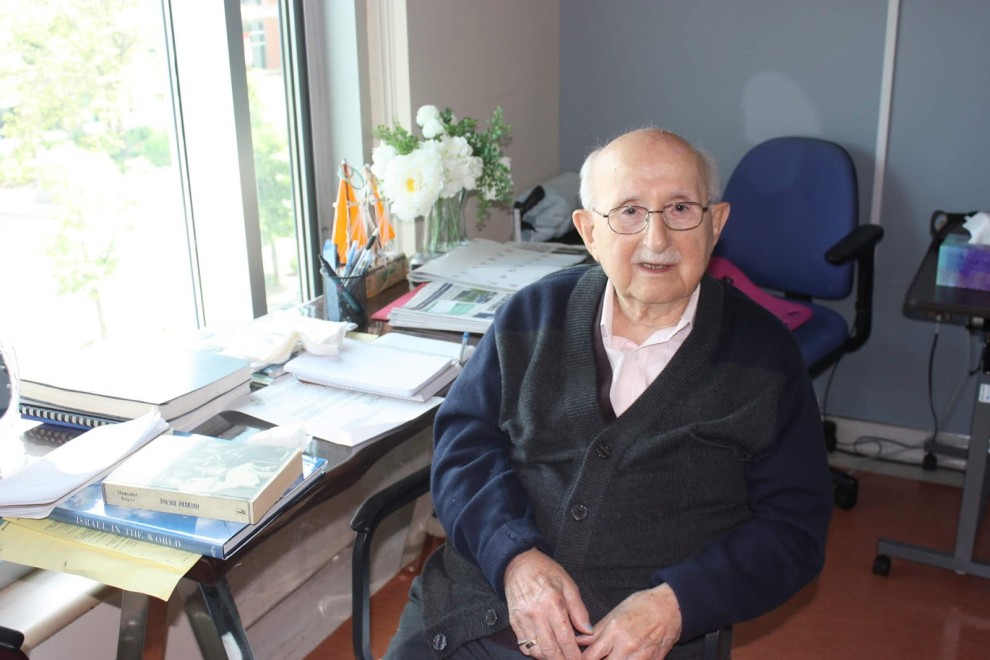 ‘Be very grateful to live in Canada,’ Holocaust survivor tells his grandchildren

While Fred Fiksel, 97, is now living comfortably at the Bess and Moe Greenberg Family Hillel Lodge with his wife, Jessie, he was once a prisoner of one of Nazi Germany’s toughest slave labour concentration camps.

Fiksel was born in the Tarnopol region of Poland (now part of Ukraine) in 1922. He says his family was well-off, and he had a “very happy childhood.” But when the Nazis invaded Poland in 1939, Fiksel’s family was “dislodged from our normal course of life” and Fiksel was sent to the Mauthausen-Gusen concentration camp complex, located in Eastern Austria.

“It’s a terrible thing to get up in the morning and there’s somebody knocking on the door to take you away to a camp, simply because you are Jewish,” Fiksel said.

As noted on Wikipedia, the Mauthausen-Gusen concentration camp complex were labelled as “Grade III,” meaning they were the toughest camps meant for the “incorrigible political enemies of the Reich.”

“The conditions in the camp were negative, and [the Nazis] tried to destroy us,” Fiksel recalled.

Fiksel was forced to perform slave labour while in the camp – which included working in mines, munitions and arms factories – all while receiving minimal food rations, “just 200 grams of bread and watery soup” a day.

When the Allies pushed into Germany, the Mauthausen-Gusen camps were liberated by the U.S. army on May 5, 1945. It is estimated that of the approximately 320,000 people imprisoned in the camps, only about 80,000 survived.

While Fiksel survived and was able to recover in an American military hospital, his mother, father and sister did not survive the Holocaust. He doesn’t even have photos of his family to remember them by.

Fiksel lived in Italy for five years before immigrating to Montreal in 1951, alongside his brother, Jay. In Montreal, Fiksel met his wife, Jessie, who survived the Holocaust by hiding in a basement for two years during the Nazi’s occupation of Poland. Fiksel said he and his wife got along because they both had a “long story of survival and a certain compassion for people around us, and for each other.”

Fiksel said he received support from Jewish Immigrant Aid Services, which paid for his schooling and allowed him to earn several degrees.

“I was clinging to education as not only a means of curiosity, but also because it was an easy way to get sustenance to survive,” he said.

Seline Yegendorf, Fiksel’s daughter, said her father would always tell her, “Nobody can take away your education or your curiosity for learning.”

In the 1960s, Fiksel attended McGill University in Montreal where he earned degrees in science, arts, electrical engineering and biomedical engineering. Yegendorf recalled that during the day her father worked, and at night he would attend classes.

“He was very tenacious and driven to become something. I think he put all his stress into becoming successful,” she said.

Fiksel worked for 30 years in the field of medical device technology related to the technical and regulatory aspect in government and industry, or as Fiksel put it, “stopping companies from engaging in monkey business and trying to peddle whatever they could to the public.”

His work experience includes acting as an adviser to the Pan American Health Organization; serving on the Canadian Standards Association’s Health Care Technology Program as executive of the Steering Committee on Health Care Technology; co-founding the Canadian Association of Manufacturers of Medical Devices; and founding HTC Associates, a healthcare technology consulting firm.

Fiksel said he is grateful to live in Canada, “a fantastic and wonderful country,” especially when he hears about people in other countries being “dislodged from their normal lives, put away into camps or killed.

“I keep telling my grandchildren – and maybe I repeat this too often – that they should be very grateful to live in Canada,” Fiksel said. “They can have a good future, provided they get an education and work hard to fit into the realm of society.”