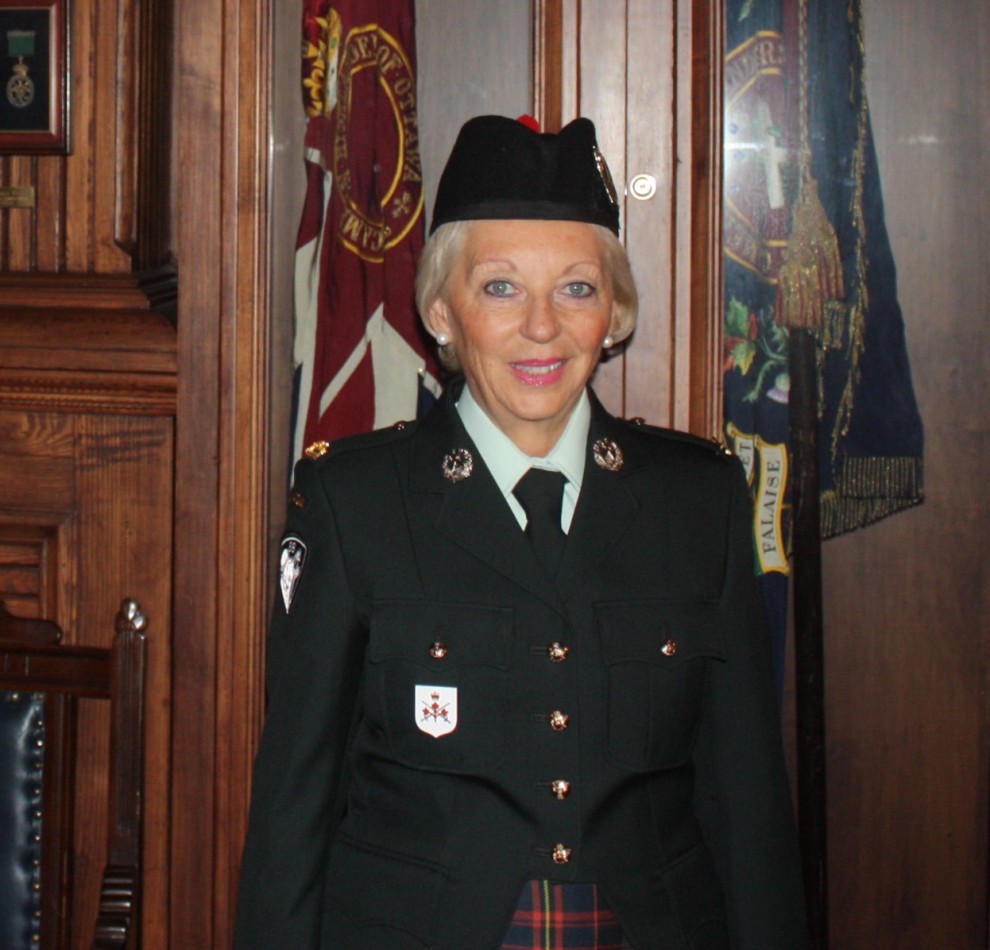 Barbara Farber has been appointed honorary lieutenant-colonel of the Cameron Highlanders of Ottawa (Duke of Edinburgh’s Own) by Minister of National Defence Harjit Sajjan.

The Cameron Highlanders are a reserve infantry unit in the Canadian Armed Forces, a part of the 33 Canadian Brigade Group. According to its website, the regiment traces its roots to 1856, and its members have served Canada in “all armed conflicts from the Northwest Rebellion to Afghanistan.”

Farber, a prominent leader in both the Jewish and broader communities, said she was approached several years ago by a friend who was at the time the honorary lieutenant-colonel of the Cameron Highlanders. He wanted to put Farber’s name forward for the same position, and she accepted. The process took 19 months to come to fruition and she officially began her position on May 9.

Farber explained that the vetting process for the nomination goes “up through the various army ranks to the top, and at that point they recommend it to the minister of National Defence, who then approves it,” Farber said.

Lieutenant-Colonel Christopher Jackson, commanding officer of the Cameron Highlanders, said the regiment was searching for “someone who had a very prominent role within the community” to be the honorary lieutenant-colonel.

Jackson said Farber’s philanthropic efforts, including her involvement with hospitals, First Nations communities, and the city of Ottawa through various boards, made her a “very prominent choice” for the position. Jackson said Farber has “quickly jumped into her role as the bridge between the regiment and different elements of our city,” and that she is a natural speaker with a “big heart.”

As honorary lieutenant-colonel, Farber said one of the most important things she will do is help the reservists to secure employment, “because if they are happily employed in Ottawa, they will stay with their regiment.”

Farber said many of the reservists have full-time jobs, while others have recently graduated from university or college. Farber said she will be attempting to “incentivize employers to hire reservists, as they are going to be good employees.”

Farber said she will also be mentoring and giving advice to the reservists, as well as being a consultant to her commanding officer from a “business and charitable perspective.” “I’ve often been accused of mothering everybody, and that’s kind of part and parcel of the role I will be playing,” Farber joked.

Farber is the second member of Ottawa’s Jewish community to serve as honorary lieutenant-colonel of the Cameron Highlanders. Former Ottawa mayor Jacquelin Holzman served in the position from 1999 to 2005. Holzman – who said she has known Farber for many years – offered her congratulations and said she expected Farber would “represent the regiment well.”

Holzman predicted Farber will “take great pride in her role,” especially during the Remembrance Day Ceremony at the National War Memorial. Holzman encouraged Farber to dress warmly for the November 11 ceremony, as “her knees will get cold.” Another Jewish community leader, Roger Greenberg, serves as the honourary colonel of the 30th Field Artillery Regiment, which is also based in Ottawa.

Farber said she feels “extremely proud” to have accepted this position as a Jewish woman, and hopes she can “bring some of that diversity to the Canadian Armed Forces.” Farber has already had several meetings with her brigade and hosted a barbecue at her home for the junior officers. She said the regiment now calls themselves her “extended family.”

“I was gratified by the first function I attended. They were concerned about providing a kosher meal for me, and that kind of effort and sensitivity really speaks volumes,” Farber said. “I want to treat them with the same kind of respect and try to help as much as I can,” she added.