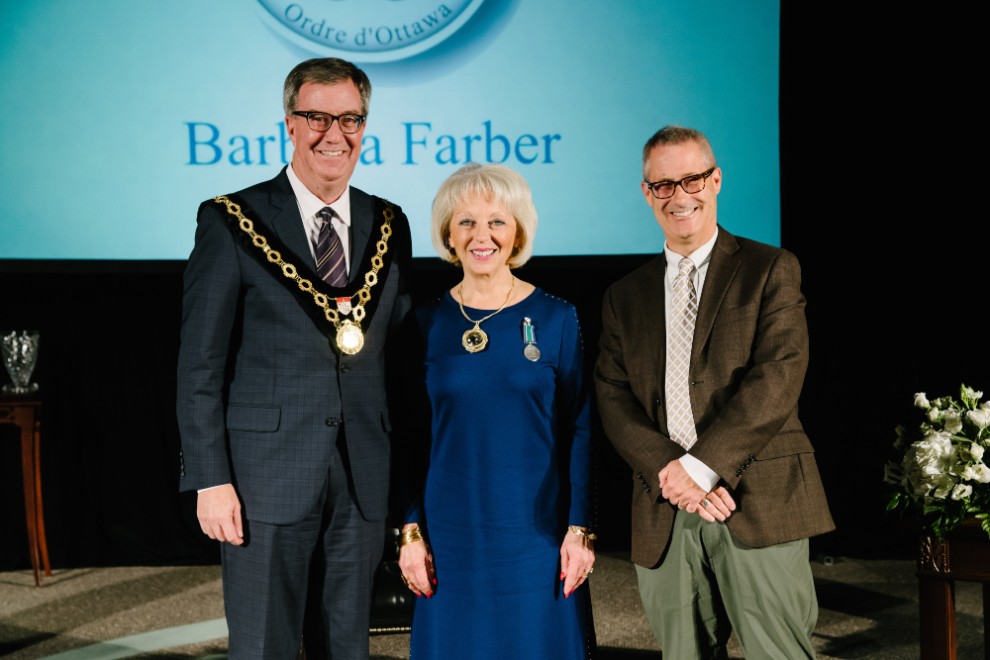 Barbara Farber and Lawrence Greenspon inducted into Order of

In a ceremony at Ottawa City Hall, November 22, 2018, Mayor Jim Watson inducted two prominent members of the Jewish community, Barbara Farber and Lawrence Greenspon, into the Order of Ottawa.

Barbara Farber is president of Leikin Group Inc., a family business focused on real estate development and property and asset management. As noted in the announcement of the award, “Farber has served in the community for close to five decades investing her time and talent to ensure that the education, skills development, and applied learning required by community initiatives, businesses, and manufacturing companies right across the city are met.”

A former president of the Jewish Community Council of Ottawa/Vaad Ha’Ir (now the Jewish Federation of Ottawa) and a former chair of Jewish Federations of Canada – UIA, Farber has also chaired and served on the boards of many organizations in the broader community. She is currently chair of the board of directors of the University of Ottawa Heart Institute.

Lawrence Greenspon is senior partner at Greenspon Granger Hill and practices criminal defence and personal injury litigation and is the only lawyer in Ottawa certified by the Law Society as a specialist in both criminal and civil litigation.

As noted in the announcement, “Greenspon has represented disadvantaged and diverse individuals and groups against governments, police, insurance companies and corporations. As a criminal defence lawyer, he has represented people charged with murder, drug and other criminal offences. He represented the first person charged in Canada under the Anti-Terrorism Act. He has represented individuals at the trial level, the Ontario Court of Appeal and has appeared in the Supreme Court of Canada on eight occasions.”

A past president of the Jewish Community Centre of Ottawa, Greenspon has also chaired and served on the boards of many organizations in the broader community, including REACH, the Resource Education Advocacy Centre for the Handicapped, which he co-founded.