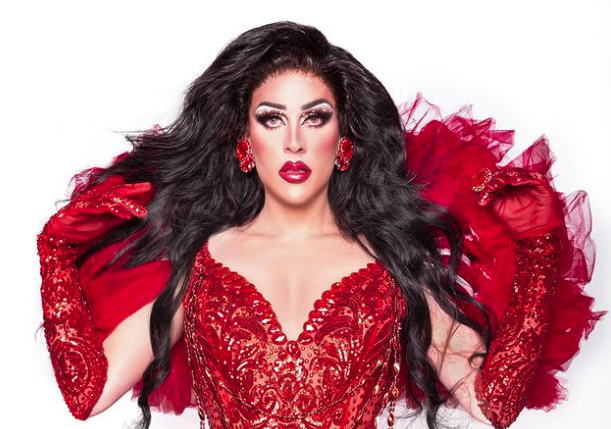 It will be all shimmer at this year’s Emerging Gen Chanukah Ball, thanks to a headliner performance from drag queen Adrianna Exposée.

Exposée, who was Miss Capital Pride 2019, has been performing since 2017, with their first drag experience as part of an English class final assignment. She’s Russian and Jewish and says that her life is “a Venn diagram of circles, which don’t intersect.”

“I felt I played many different characters growing up: trying to be ‘Canadian’ enough in school, trying to be the perfect son to my parents, trying not to let one world bleed into another,” she said.

Exposée, who began performing outside of Toronto, said that her Russian background gave her the drive to be a hard worker, but being Jewish influences the type of drag she does.

“Coming from a very traditional family, I try to keep my drag digestible for all audiences,” she said. “I am a queen for all audiences because I’ve always played many roles to stay safe in my life.”

For her, drag is a safety net.

“I also love that no matter what happens in my life, I can put my energy into something which brings me happiness.”

In the past, she has headlined diverse cultural events, such as Pride Purim, synagogue shows, and Rainbow Railroad initiatives. In 2019, a storytelling show for children hosted by Exposée was interrupted by religious protesters Being invited to an event like the EG Chanukah Ball shows how far acceptance of drag has come.

“I’m most excited for this event because my presence represents the intersection between Judaism and acceptance,” she said. “I’ll be bringing light, love, and sparkle to this end-of-year celebration — showing that by being yourself, you will always arrive where you need to be.”

The Emerging Gen Chanukah Ball is on December 17. Get tickets and more details here.