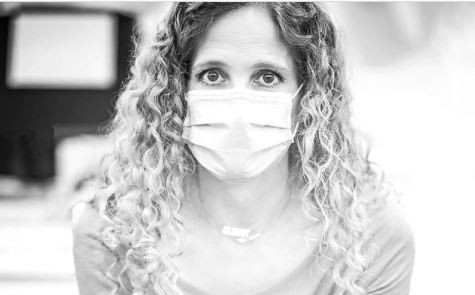 Photo: Glenna Gosewich recently donated a portion of her liver to save another person's life. Glenna has donated blood 106 times and plasma 13 times. In the full photo below, she is shown holding plasma she donated at the Héma Québec clinic last June. 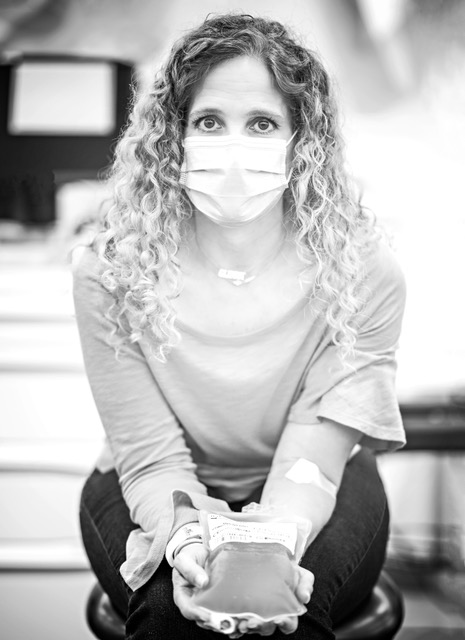 Some things in life are worth the sacrifice. This is particularly true when it comes to saving a life.

Most of us are born with two kidneys. However, a healthy person can live a normal, healthy life with just one kidney.

Did you know that if someone requires a liver transplant, you can donate a portion of your liver to save their life and your liver then grows back?

This means that a healthy person can give a kidney to someone whose kidneys aren’t working. Or donate a portion of their liver to someone who needs one.

That’s what Glenna Gosewich did, in one of the biggest mitzvahs someone can do. Jewish tradition teaches us that "we cannot stand idly by when a life is at stake." - Leviticus 19:16

"When I made the decision to become a liver donor, I didn't realize this was a prescribed mitzvah and it wasn't the rationale behind my donation. But I now have it written on a sticky note and posted in my office and it makes me feel even better about my decision, knowing I've fulfilled this mitzvah."

In Gosewich's case, they determined that the right lobe was best-suited for donation, which meant that they had to remove 62% of her liver. "I know someone who donated to a pediatric patient and they removed 22% of her liver. The size of the donation depends on the anatomy of both the donor and the recipient."

Born and raised in Ottawa, Gosewich went to university in Toronto but returned to Ottawa to work and live. About six years ago, a member of the community needed a liver transplant and there was a mass appeal to find one.

“I put in an application at the time, but never heard anything,” said Gosewich. “But one day I was speaking with an advocate for organ donation and she told me that at the time they had received so many applications during that appeal that not all of them were processed. She suggested that if I was still interested in donating, I should re-apply.”

So Gosewich put in her application again — a significant amount of paperwork — and the screening process began.

Once an application has been completed, if you are viewed as a potential donor, there is an extensive screening process. “There were follow-up tests of everything — so many appointments (virtual because of COVID) —  I went through psych and social work evaluations, I had to go for lots of blood tests, an ECG, an MRI, a CT and a stress test. It was the most comprehensive physical I've ever had!” said Gosewich.

In January, Gosewich knew she was getting close to being approved, though the whole process took longer than she thought.

When the screening process first began, Gosewich kept what she was doing under wraps — she wasn’t doing it for attention or gratitude, but rather to be helpful to someone in need. As she began to tell people, most were very supportive.

“The only person that challenged me a bit was my father. He understood my motivation, but he was worried about me and my health. He didn’t want me to put my life at risk,” said Gosewich. “He understood what motivated me but he was looking out for me.”

Gosewich’s partner was concerned about donating during COVID.

“But we didn’t know when COVID would be done, so I didn’t want to wait,” said Gosewich.

Now that she has recovered from the surgery and gone public with the donation, Gosewich said she has been flooded with messages of appreciation.

“It’s humbling,” she said. “People are so complimentary and supportive.”

She also received a card from the recipient — as a non-directed living donor, Gosewich doesn’t know who received her organ donation.

“They don’t know who I am either,” she said. “We’re allowed to exchange one piece of communication, so I received a lovely card and have sent one back.”

Gosewich said the three weeks after surgery was challenging — but she was back at work after that, and even started working out again at about the four-week mark.  She would do it again “in a second.” She’s now back to about 97-per-cent recovered and will soon have her follow-up MRI to determine that the liver is growing back as expected. She also plans to make her first plasma donation since December some time this month.

It’s a big mitzvah to make, and living donors are desperately needed across Canada.

Gosewich wasn’t the first in the Ottawa Jewish community to step up to make a living organ donation. In 2015, Rabbi Reuven Bulka Z”L championed a search to find Jewish Federation of Ottawa Vice President of Corporate Services, Leslie Kaufman a living liver donor.

“Organ donation is all about saving lives,” Rabbi Bulka said at the time, and in response, some community members did answer the call and submitted applications. Kaufman's conditioned quickly worsened, however, and she received a liver from a deceased donor.  But the conversation had begun and awareness of living organ donation increased. Then, in 2019, Rabbi Deborah Zucker of Kehilat Beth Israel donated a kidney to David Uzan.

“I was very touched that she would be so enthusiastic about doing something that would cause her so much discomfort,” he said at the time. “I am maybe feeling a little bit nervous because it’s a big procedure to go through, but more than anything I feel gratitude.”

Gosewich urges everyone to register their consent for organ and tissue donation at http://www.beadonor.ca and to talk to their family about their wishes. She also hopes that people will make donating blood more of a priority. Less than four per cent of eligible Canadians currently donate blood.

“Also spread the word and make others aware — if you can't donate blood, encourage someone else to do so.”