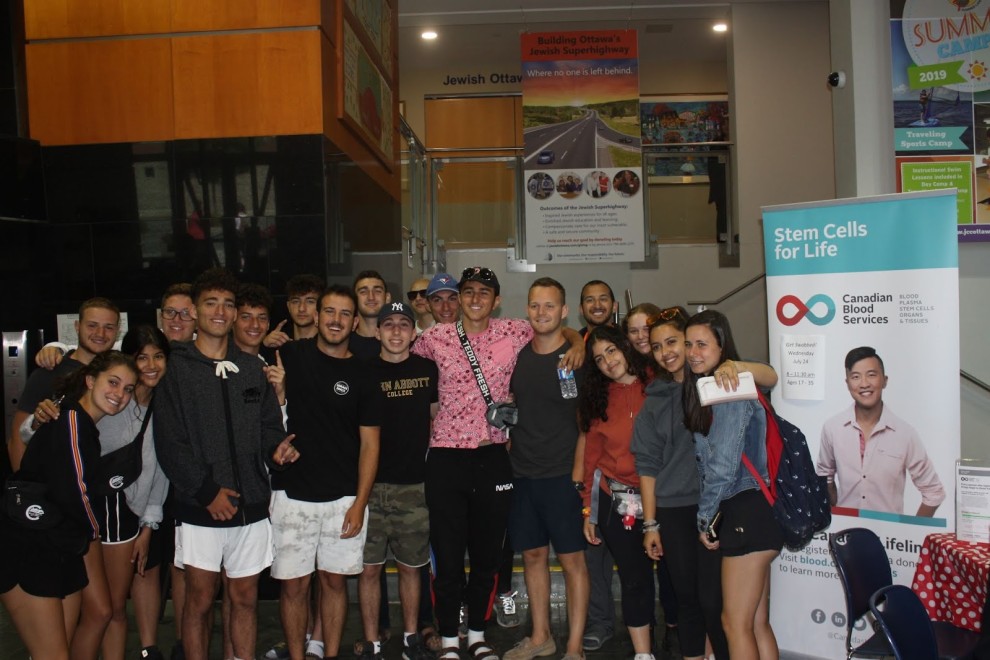 Ottawa’s Jewish summer camps – Camp B’nai Brith of Ottawa (CBB), JCC of Ottawa Summer Camps, and Camp Gan Israel – are all reporting they had strong, successful seasons. This year at CBB was an “absolute success,” said Cindy Presser Benedek, director of the sleepaway camp located in Quyon, Quebec, about a 45-minute drive from Ottawa.

Benedek notes that CBB had an Israeli flavour this year thanks to a record number of Israeli staff – 17 in total – who added to the campers’ experience by immersing them in Israeli culture and allowing them to further their connections with Israel. “I heard many, many campers say they were super excited to tell their parents they had the opportunity to learn more about Israel, and wanted to encourage their families to take them on a trip to Israel,” Benedek said.

CBB also had its largest ever number of counsellors-in-training, and Benedek said the camp is “looking forward to hiring them next summer as part of our junior staff.” CBB ended the summer with a “colour war,” with campers divided into teams to compete in a series of challenges to earn points over a three day period. Benedek said the Jewish summer camp experience is a “valuable gift” that everyone should consider giving their child.

“It’s not just about going and experiencing the outdoors, but it’s also connecting with your community and being passionate about being part of a Jewish community,” she said. “We welcome all families to come check us out.”

In fact, CBB began the summer with a family camp weekend – launched with a $2,000 Jewish Experience Microgrant from the Jewish Federation of Ottawa – which gave young families an opportunity to visit the camp before camp season officially began to “experience camp Shabbat and programming.”

Jon Braun, executive director of JCC Summer Camps, said there were more than 2,000 registrations this year, up from less than 1,800 in 2018. JCC offers three categories of summer camps, which Braun said allows parents with several children to “put them all over the place, and over the nine weeks they can move them around and still have them stay under one roof.”

JCC Day Camp (ages 2-14) offered different themes each week, such as Digging for Dinosaurs, Summer Superheroes, Animal Planet and Hollywood/Disney Extravaganza, as well as instructional swim lessons and a daily free swim. The Travelling Sports camp (Grades 2-9) takes kids to locations around Ottawa to partake in a variety of sports, such as windsurfing, tubing, go-carting, bowling, zip-lining, gymnastics and swimming.

This year, JCC Summer Camps launched a new Leaders-in-Training (LIT) program for kids entering Grade 8, which was created to be separate from the already established Counsellors-in-Training (CIT) program for those entering Grade 9. Braun said these programs are meant to teach kids the skills needed to become a JCC camp counsellor. “You still get to have the camp experience, but with a leadership role at the same time,” he said.

Aaron Kaiman, associate director of JCC Day Camps, said his primary focus was working within the day camps and collaborating with the CITs and LITs to ensure, “the kids are enjoying themselves and the camp counsellors are engaging with them professionally.”

Braun said for next year, JCC Summer camps are looking at adding new specialty camps, such as a golfing camp. “We are always looking to improve and add features. The beauty here is if you have an idea for a camp, you can make it happen,” Braun said. Director Devora Caytak Director of Camp Gan Israel, located at the Jewish Youth Library, said the camp had 120 registrations, an all-time record.

Caytak said “Camp Gan Izzy” focuses on “giving the kids a summer of a lifetime.” Camp Gan Israel is a part of a group of Chabad summer camps, with branches around the world.

Caytak said the day camp, which runs for five weeks, allows children to participate in numerous activities in a Jewish environment, such as sailing, karate, boating, dance, crafts, and – new this year – archery. Caytak said Camp Gan Izzy places a strong emphasis on swim lessons, and the camp ends every year with swim show, where kids are able show off the skills they have learned over the summer.

Camp Gan Israel’s camp counsellors come from all over the world and this year included counsellors from Florida, Nevada, Colorado, Guatemala and Costa Rica. Caytak said the counsellors’ involvement with camp “doesn’t just end at 4:00.” Through the “Goodnight Gan Izzy” program, counsellors visit different campers’ homes to read them a bedtime story, say an evening prayer or participate in crafts with them. Caytak said for next year, Gan Israel is considering bringing the older kids on an overnight camping trip to Algonquin Park to learn new outdoor skills.

Caytak said Camp Gan Israel gives kids a “healthy sense of who they are, and allows them to feel proud to be Jewish.”