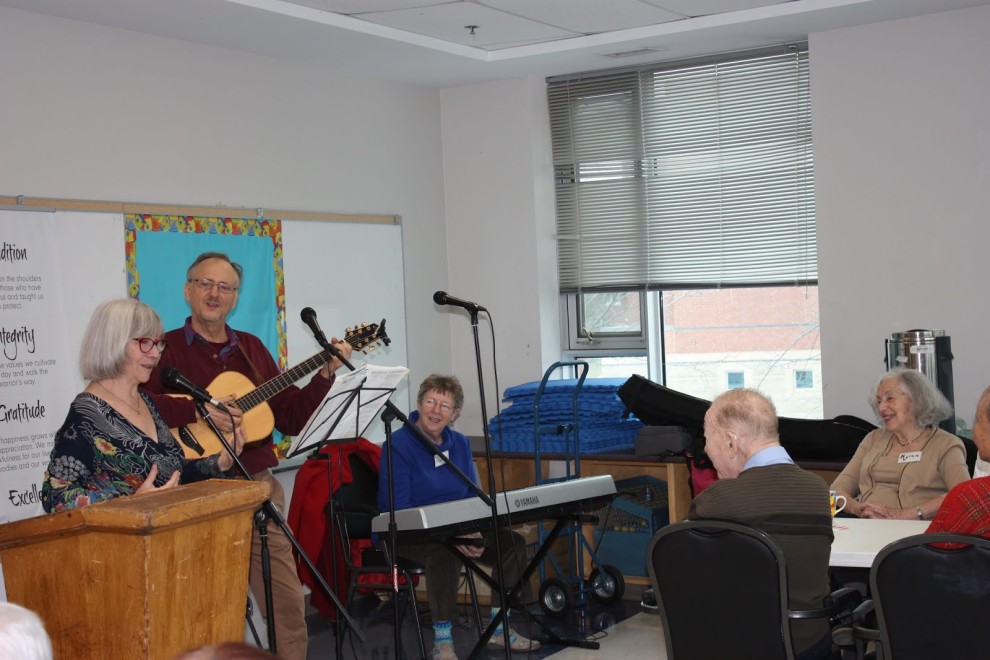 “Friendship, community and social engagement” are at the forefront of Creative Connections, a weekly Jewish social and recreational program geared towards Ottawa’s “cognitively well, older seniors.”

Creative Connections is a joint program of AJA (Active Jewish Adults) 50+ and the Soloway Jewish Community Centre (SJCC). The celebration of Jewish holidays, education through invited scholars, and the enjoyment of Jewish film and music, are integral components of the program.

On November 5, programming began in the morning with a musical performance by Jay Kassirer and Rita Finnigan with Patsy Royer, who led the audience in singing songs such as “Sunrise, Sunset” from “Fiddler on the Roof,” and “Memory” from “Cats.”

The seniors then participated in a ‘Gentle Gym’ workout led by professional trainer and Ottawa Jewish Bulletin fitness columnist Gloria Schwartz, which involved light exercises with dumbbells and medicine balls, all of which could be completed while sitting.

After lunch catered by Babi’s Restaurant, the Creative Connections group joined with AJA 50+ for a talk by criminal defense lawyer Lawrence Greenspon, who discussed Canada’s criminal justice system and spoke about the trials of Jian Ghomeshi and Joshua Boyle.

Previous guest speakers for Creative Connections have included Danielle LeFrancois, who presented her nature photography, lawyer Kate Wright, who talked about the law for seniors, and Ilana Rabin, who spoke about celebrating the High Holy Days in Israel.

Olly Wodin, coordinator of Creative Connections, said the aim of the program is to create a welcoming Jewish space for seniors, provide a variety of stimulating and engaging programs, and to “reduce the isolation that sometimes comes with older age.”

Wodin said many of the program’s ideas are generated from the Creative Connections members themselves, and some lead programming on areas of their interest or expertise. For example, in December, Evelyn Marcovitch, Naomi Skoll and Eva Gelbman will be sharing their stories, and in January, Murray Citron, who contributes book reviews to the Ottawa Jewish Bulletin, will offer a presentation on Yiddish poetry.

Odin says participants feel consistently engaged in Creative Connections and they are a “lively, welcoming and intelligent bunch.” She added that the group “would love to have more volunteers.”

Murray Citron, a four-year participant of Creative Connections, said Merle Haltrecht-Matte, then the program’s coordinator, invited him to join while he was at Hillel Lodge recovering from hip surgery. Along with several other seniors, Citron now makes use of Para Transpo services to regularly attend the sessions.

Citron said he enjoys the ‘Gentle Gym’ workouts as they are “not too strenuous” while still providing a challenge, and can be completed while sitting down or holding on to chair, and said the Creative Connections programs that appeal to him the most involve music, such as singalong sessions and Junkyard Symphony, or when Schwartz times her exercises to songs by artists like Tony Bennett and Doris Day.

Eleanor Bocian said she was introduced to Creative Connections 12 years ago, when a friend encouraged her to join.

“You meet new people, enjoy yourself and have some laughs. It keeps me going,” Bocian said. Bluma Dieks-Goldenberg, who began participating in Creative Connections 18 years ago, when it was “just six or seven people,” said the program is a great way to get her out of the house.

“I enjoy the speeches and music, and I definitely like to sing along.” Goldenberg said.

Creative Connections runs on Tuesdays from 9:30 am to 2:15 pm, in three 10-week sessions taking place in fall, winter and spring. Membership in AJA 50+ or the SJCC is required to participate. The program costs $50 for each session, and an additional $60 a session for those requiring transportation. For seniors struggling with the program’s costs, financial assistance is available.

For more information about Creative Connections, contact Olly Wodin at creativeconnections@aja50plus.ca or 613-627-3837.