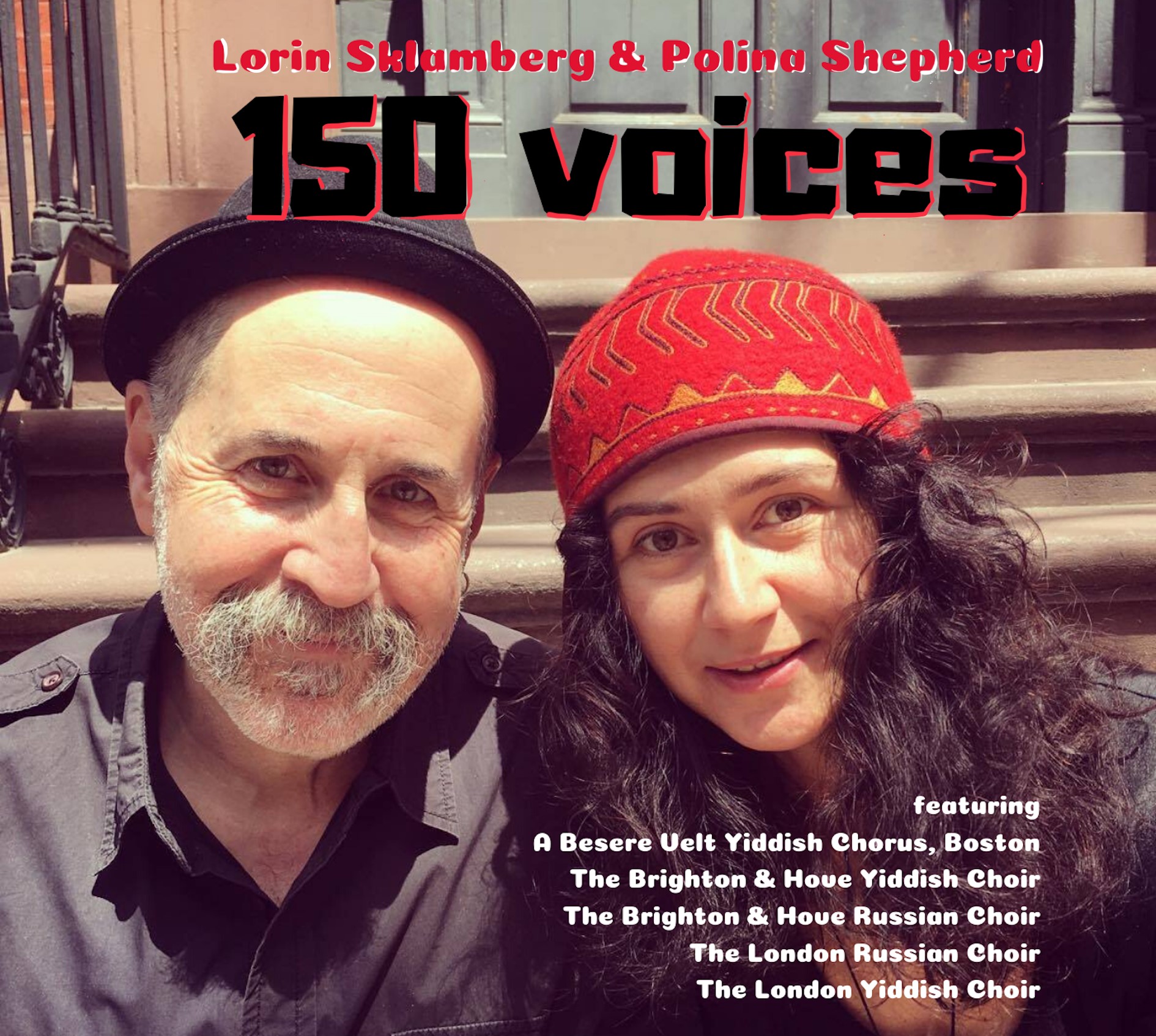 New York-based Lorin Sklamberg – who is best known as lead singer of the Klezmatics, arguably the greatest contemporary klezmer band – has long been one of my favourite singers of Jewish music. On 150 Voices, he teams up with the very talented Polina Shepherd – who grew up in Siberia but now lives in the United Kingdom – for a lovely album of mostly Yiddish, some Russian, and some bilingual Yiddish and Russian, folk and art songs on which they are surrounded, on most songs, by one of, or combinations of, five Yiddish and Russian choirs from the U.K. and U.S. It is safe to assume that with the five choirs, there are, indeed, 150 voices on this 18-song, 58-minute, album.

The album opens with “Af Rusishe felder (In Russian fields),” Shepherd’s setting of a Yiddish poem by David Hofstein which recalls the bleakness of winter in the Russian shtetl of Hofstein’s childhood before the turn of the 20th century. The arrangement begins with Shepherd playing some sombre chords on the piano as Sklamberg and Shepherd begin trading verses. Soon they are joined in glorious harmony by three of the choirs – the Brighton and Hove Yiddish Choir, the Brighton and Hove Russian Choir, and the London Russian Choir. Although the subject matter is bleak, there is great beauty in the lyrics, the music and the performance.

Another highlight is a rousing rendition of “Un du akerst (And you plow),” a revolutionary call for exploited workers to rise up, whose Yiddish words were written by Chaim Zhitlowsky based on an earlier German-language poem by Georg Herwegh. Sklamberg and Shepherd receive dynamic support on the song from Boston’s A Besere Velt Yiddish Chorus.

Yet another highlight is “Gris, bagris (Greet them with singing),” a joyful Yiddish song of welcome (perhaps a welcome to Shabbat or holiday visitors), whose verses were written by Leibush Lehrer, with an additional verse by Marty and Musia Lakin. The harmonies by A Besere Velt Yiddish Chorus are both powerful and warm.

Perhaps my favourite piece on the album is the poignant “Kh’hob dem kheyshek (I am willing),” a contemporary song by American folksinger Holly Near translated into Yiddish by Yuri Vedenyapin. Although the original song was written in 2003, and recorded by Sklamberg and Shepherd with A Besere Velt Yiddish Chorus in 2019, the song seems like it could be a reflection on the COVID-19 pandemic. At the end of the arrangement they repeat the first verse – this time in the original English.

A downloadable PDF at this link on Shepherd’s website includes the lyrics to all of the songs in Yiddish and/or Russian, as well as in transliteration in English letters, and with English-language translations.

150 Voices more than lives up to the promise of its concept.