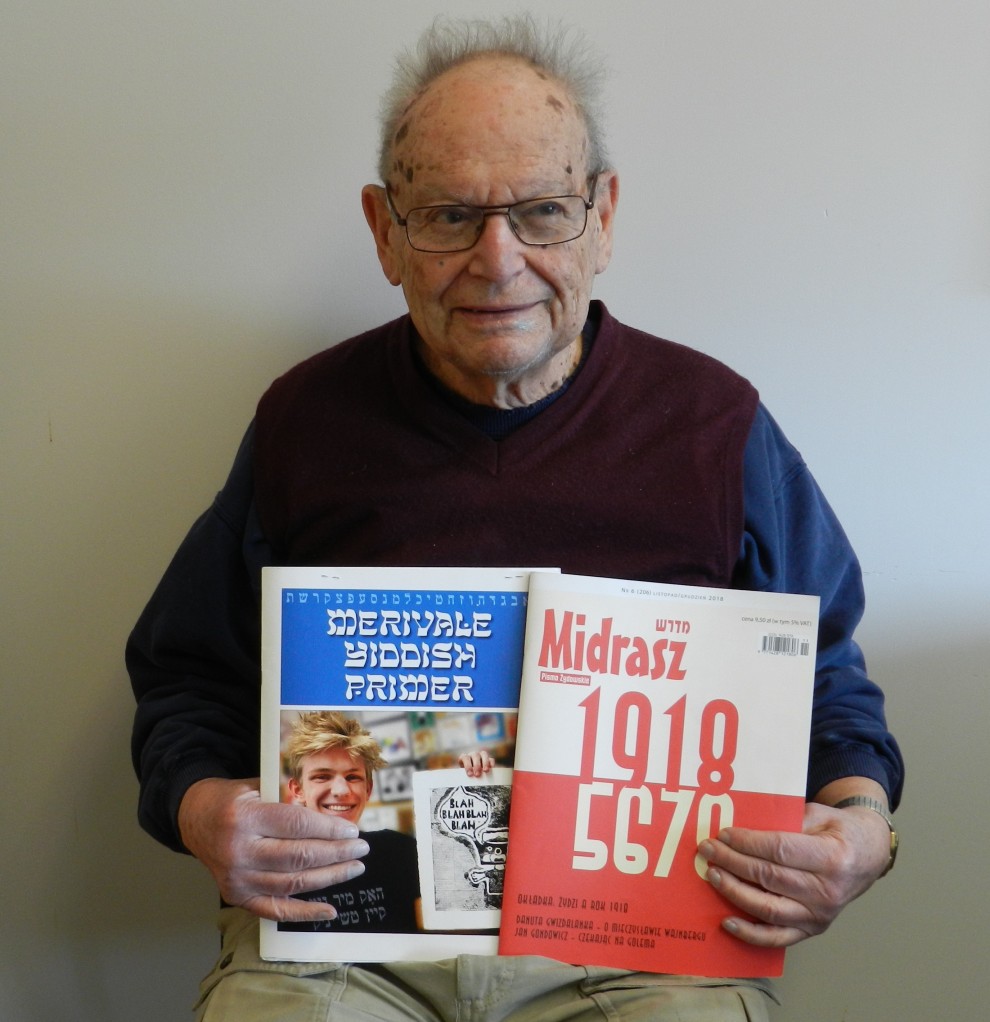 Murray Citron might be best known in Ottawa as a real estate lawyer – he retired in 2001 – or in the pages of the Ottawa Jewish Bulletin as one of our contributing book reviewers. But he is also a published poet, one of the city’s leading Yiddishists, and a translator of some renown of Yiddish poetry – particularly the work of Itzik Manger (1901-1969), one of the 20th century’s most celebrated Yiddish poets.

Yiddish was his first language, explained Citron who was born in New York in 1928 and moved to Toronto as a child. As an adult, he moved to Ottawa where he established his law practice.

“I spoke Yiddish and English interchangeably at the age of five,” he said during a recent interview at the Bulletin office.

“I had at home The Penguin Book of Modern Yiddish Verse,” Citron said when asked how he became interested in translating Yiddish poetry. “I had it for many years and one day, for no reason that I can remember, I took it down from the shelf and saw some poems that looked interesting, but particularly Itzik Manger. His poems struck me. There were English translations along with the Yiddish but I started hearing other translations in my head.”

One summer day, Citron said he found himself translating a couple of Manger’s poems, especially “Eve of the Apple Tree,” in his head while driving to Gananoque.

“I was fortunate that I didn’t get stopped by the OPP as a driver whose ability was impaired by a Yiddish poem,” he joked.

“When I got home, I wrote down the translation, and I went on from there.”

“The first publication I received was in Modern Poetry and Translation, a highly-regarded magazine published in England at Oxford,” he said. “I sent them four translations of poems by Manger based on The Book of Ruth … and with a few weeks I received a note from the editor saying, ‘We’re going to use them all.’”

The editor asked that the work to “be sent on the computer,” said Citron, “and this was a new thing in my life… Until then I didn’t have email.”

Soon, though, Citron was able to use the computer in his literary work and to send things off to editors via email.

Modern Poetry and Translation has since published Citron’s work in subsequent editions and other publications that have published Citron’s translations of Manger and other Yiddish poets include Outlook, Jewish Currents, Tablet, In Geveb, and PaknTreger, the online journal of the Yiddish Book Center in Amherst, Massachusetts.

Citron was published on In Geveb, an academic online journal of Yiddish studies, after reading an essay there that mentioned Manger’s poem, “I’ll Take Off My Shoes,” in its original Yiddish as being untranslatable into English.

“Lo and behold, I had an English translation, which I sent them” said Citron.

Two of the Yiddish poets whose works Citron has translated were Holocaust survivors Rokhl Korn and Chava Rosenfarb who both settled in Montreal and had significant writing careers in Canada in their later years.

Recently, Midrasz, a magazine in Poland included the Polish-language translation of Manger’s Yiddish-language article, “The Destiny of a Poem.” Citron’s English-language translation of the article appeared in PaknTreger, which Midrasz editor Bella Szwarcman-Czarnota read online. While translating his English version into Polish, she contacted Citron who sent her Manger’s original Yiddish version, which he’d first found in the Greenberg Families Library at the Soloway Jewish Community Centre.

“So her version is a Polish translation of my English and Itzik Manger’s Yiddish – I don’t know in what proportions,” said Citron.

As well, Irving Osterer’s Grade 12 graphic design class at Merivale High School published the “Merivale Yiddish Primer,” which it dedicated to Citron, “whose extraordinary efforts have made Yiddish literature accessible to a new generation.”

As part of its oral history project, the Yiddish Book Center has an online video interview with Citron that can be seen at https://tinyurl.com/yyx98whe.

Clearly, Citron’s efforts are being noticed here at home, and well beyond.